One of the valuable riding horse breed is Akhal-Teke. A native of the East has deep roots. Akhal-Teke horse is the oldest breed in the world. Today, the number of Akhal-Teke is not more than 3 thousand individuals. That is why they are considered a valuable rarity high value. 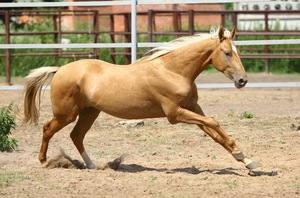 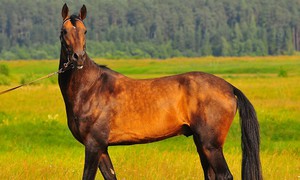 The beginning of rock formation happened about 5 thousand years ago in the region of Central Asia, whose territory today belongs to Turkmenistan. Breeding horses of the nomads were crossed with local horses to get a tall, graceful and resilient individuals.

Akhal-Teke was in close relationship with the Arab horses. Some scientists suggestthat both dogs were used for breeding Arabian horses. But according to the available historical data until it is proved that species were formed separately from each other.

The beginning of breeding of Akhal-Teke horses were laid the ancient Parthian Kingdom. Then Persia and Turkmenistan noticed the beautiful animals and also began to breed these animals on its territory. Unfortunately, the breed survived only the Turkmens, who was very fond of horses: horses in this country was one of the main means of transportation and was often used during the war. Horses grazing in oases, fed grain and pellets. In winter, the animals wore blankets and carried away in the specially set up tents. The best horses were selected for experienced breeders, who have kept the animal at his home, nursed him and trained for competition in the fighting.

This attitude to animals was formed horses have a special character and appearance. Today the Akhal-Teke horses look exactly like their ancestors.

The Akhal-Teke breed stands out among the rest. This is the most elegant, graceful and beautiful species on the planet. With its ancient history they represent true heritage, which boasts every owner of this breed. The price for the Akhal-Teke is growing from year to year.

The size and proportions

The Akhal-Teke horses have a relatively high growth. It ranges from:

Tall animals have a lean Constitution. Looking at the Akhal-Teke horse in the race, it feels like it runs a noble, strong and graceful mountain deer. The horses look elegant and beautiful with long and straight legs. Although the body line is slightly curved, it is proportional to all parts of the body.

Horses have a peculiar shape of the head, which is characterized by well-developed occipital part, long and graceful neck perfectly smooth profile and a slightly narrower bottom part. Large ears have the correct form. Large and expressive almond shaped eyes set far back and seem a bit slanted.

The Akhal-Teke has a narrow deep chest and powerful croup. The body rests on strong, muscular legs.

The Akhal-Teke breed characteristic thin skin with distinct subcutaneous vessels. Short hair has a silky texture. The body is characterized by a small vegetation in the area of mane and tail. Some species have a mane does not. This breed has an anomalous feature: sometimes newborn foals is completely bald and usually die early in his life.

Horses with a lean but powerful bodies in ancient times were compared to animals like Cheetah, snake and eagle. The smoothness and flexibility movements, thin skin, silky and smooth skin, high neck gives the animal a resemblance to a snake. Powerful, flying gallop, proud and majestic like the eagle. The leanness and dryness of the trunk resembles the body of a Cheetah, or a purebred Greyhound dogs. Akhal-Teke horse can truly be considered a work of art, the creation of which was spent many years of hard work of horse breeders.

The Akhal-Teke breed amazing variety of colors. Horses are:

Animal fur has a characteristic luster Golden tone, which is very noticeable in the sun. Perhaps due to this feature of the Akhal-Teke horses was called in ancient times “heaven.”

But this is an incomplete list of options for colors of the breed. In life, you can find individuals with ogrenim and piebald color. There are even rare specimens with Golden-red color of the body whose mane and tail are colored in dark shades.

Akhal-Teke horses differ wilful character that has developed over millennia, during which the animals lived next to the only person for them. This breed does not recognize anyone except its owner. But these horses are very smart and independent. They show no hard feelings, though, and have a hot temper and great vitality. Trust animals of this breed must be earned, as they have a well developed sense of self-worth.

If Akhal-Teke will be able to establish physical contact, then the horse will not obey the owner. Any decisions she will make. Due to the complex nature of Akhal-Teke horses are complex in the preparation for sport competitions. If you manage to establish contact with them and understanding, then they will forever be loyal and good friends.

The features of the Akhal-Teke breed

The breed was formed in the territory of the deserts of quicksand. Has it affected the smoothness and the height of the step, gallop and trot the horse. 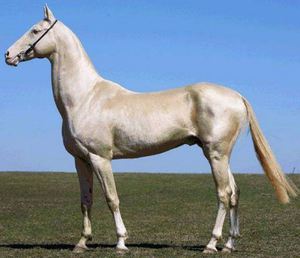 Because horses are trained as racehorses, the animals acquired a high rate of speed. The breed was trained for riding, so elastic movements of animals do not tire riders. But rude attitude and contempt for a horse can really hurt her. Thoroughbred individuals are not “exercise equipment” that will meet any requirements and orders of the rider. The horse needs a special approach. Only an experienced and confident rider can win the understanding and trust of the animal and will be able to achieve high sports results.

Best shape of Akhal-Teke horses reach only 5-6 years, so their contents are quite costly.

Animals are fed only high quality feeds: green hay from alfalfa give horses 1 times a day, clean the choicest barley – 2 times a day. Drink water animals must be at least 3 times a day.

The use of the Akhal-Teke 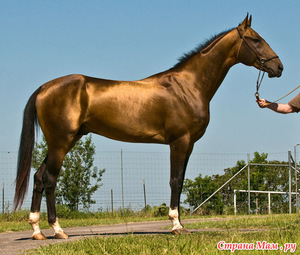 In the past these horses were used as warhorses or assistants in falconry. They rarely engaged in normal travel, and in carts, and as pack animals, they have never been used.

Modern individuals take part in such competitions as smooth jumps and distance running. Occasionally they are trained for dressage or jumping. Horses have a high speed, but their speed performance is far from the results of the English riding horses.

Akhal-Teke is easy to train for competitions in show jumping. Also they are suitable for circus training with their fluid movements and subtle mind.

The populations of Akhal-Teke horses

Using the methods of national selection of the unique Akhalteke breed of horses has remained unchanged for thousands of years. Pedigree animals are not kept in the stud book: the Turkmens passed it from generation to generation. The twentieth century was a disastrous period for this breed. At this time, the horses involved in the plant breeding that has caused great damage to their populations.

In the last decades of the century there was a reduction in the Akhal-Teke horses. Cruel law made the Turkmens to send the best representatives of the breed to the slaughterhouse. It should be noted that this nation never used horse meat from animals that they considered a national treasure of their country.

The reduction in livestock has led to loss of genetic diversity. When the number of individuals of the Akhal-Teke breed has declined to alarming figures, horse breeding was resumed.

Today the first place in the number of livestock of Akhal-Teke horses is Turkmenistan, the second – Russia. In Europe and the United States also breed this breed, which is appreciated and loved for the unique beauty and working qualities.

Akhal-Teke – one of a kind breed of horses which has an incredible fluidity of movement, shiny coat, proud mill and Swan neck. Horses have almost equal value with Arabian horses. Despite the rarity and high cost, Akhal-Teke horses are very popular.