Wild horses Mustangs are animals that have very powerful energy and a tremendous thirst for free life, it will become clear as soon as you see this beautiful animal. Horse the Mustang is a wild horse, but once he was home. These animals — mammals, solipeds and belong to the family horse. 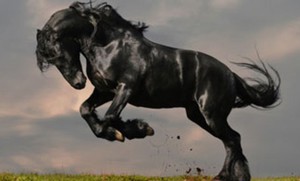 The Mustang has a very big similarity to domestic horse, but she’s actually wild. There were these animals because of man and historical events.

In the second Millennium in the sixteenth century, when the colonization of the American continent, the people who migrated, carried with them a great many things: clothes, food and other things for life, however, they had horses. In that period these animals serve as transportation, and helped to cultivate the land.

Over time, the continent came new people, and they did it on horseback. It often happened that the settlers leave the animals halfway, as they could not bear the load and the long road: horses fell, and began to limp or even refuse to move on. People hoped that will be able to pick them up, but the animals have something to eat and through it the horse was gone. Then they came together in herds and so survived. These horses were introduced and those that escaped from farms and were not found by the owner.

Thus, the horse began to appear on the continent, some time later, their number reached two million. Called “Mustangs” they were, because in Spanish it means “wild”.

Wild horses Mustangs live in North and South America, there can be found even now. And animals that have been tamed, live on the territory of Europe.

This breed of horses, and now can be found in the wild. They live in herds. Among them there are leaders and alpha female, as well as other horses. In the herd a total of about eighteen individuals. 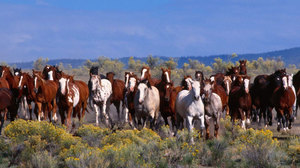 The main task of the leader is the protection of the herd. If over herd hovering danger, the fearless knight will have to resist the enemy alone, without help from others. But this time the alpha female will lead the herd away from danger.

In some cases herds are rallying to resist the predators. To do this, the horses make a circle in the middle of which are foals and fighting off enemies with their hooves.

Way of communicating with each other is their neighing.

Mustangs are direct descendants of the domestic horses, so they are very similar to them. Firstly, many similarities exist in appearance. But a lot of that has changed the nature and improved.

These horses can be compared with many breeds, but they still have a number of differences. They will always remain big and strong with the ability to develop a high speed.

Wild horses have a much stronger immune system than their home rodonachal, at least in the care and feeding they are quite unpretentious. However, they are very hard to housebreak, to tame, because their task is not simple. No wonder they say that a man who has the trust of the Mustang and train it, is a special man.

The character and appearance of

The character of horses

Wild horses have greater endurance, very smart, run fast and have a lot of power. All that they borrowed from other breeds such as draught horses, horse riding and pony trekking.

They are very skittish in nature and very loyal to the wild, as it is their habitat, but despite this it is possible to tame and command respect. If you manage to do it, then you will have incredibly loyal horse. 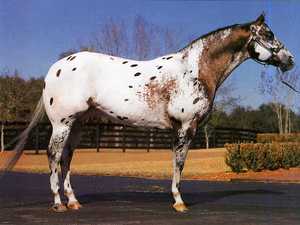 The appearance of these horses may be varied, as in them the blood is not of the same breed.

The most common colors:

In General, these horses have a length of about 1.5 meters, and their weight is 400 pounds. They have very strong legs, not very expressive withers, and back, neck and torso are short. It is this body frame gives them the opportunity to develop greater speed.

Mane they have beautiful, long and shiny. Mustangs are very clean, so the cover is always very clean and shimmers in the sunlight.

Like other horses, ponies are herbivores. They eat fresh grass, small bushes and leaves from trees. To find food, animals can overcome a very great distance.

Horses tamed at home eat about three pounds of feed a day. It can be feed, hay or fresh grass. These wild animals love to eat carrots and sugar. When the weather is very hot, they have close to sixty litres of water a day, if the weather is cool, then half — thirty liters.

Mating in horses starts in mid-spring and continues until early summer, it contributes to the reproduction in the future. In order to extend their own view, stallions must conquer the female. It turns out only strong individuals.

Their offspring, the female carries five months, this period can vary, the difference may be from seven to fourteen days. When the Mare is carrying a small horse, she is looking for a cozy place and is there until the birth. 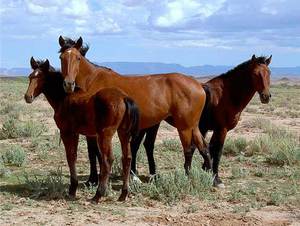 After two hours after birth, a small stud can confidently stand on his feet. For seven months of food for baby is breast milk. Then, a little later he will start eating the grass.

In the twenty-first century, the wild horses living in the wild, there were about thirty thousand. People kill these animals to get hides and meat, but at that time they did not think that the breed of ponies may disappear. In the United States in the legislation, there are acts that protect this kind of horses.

In 1971, a law was passed that forbade to kill these animals.

Wild horses at the farm

Many breeders want to see these norovlyu animals in the stables. As these horses can cope with huge loads and can be used in the household. In addition, they take part in various sports races, because they have very high stamina and speed, in this they have no equal.

And the Mustangs in the content is unpretentious and does not create any problems.

If you decide to purchase this horse, choose it correctly:

The fate of the progeny in the wild

The mother of the stallion, who was kicked, you may go with him or stay in the herd. Personally, it’s her choice.

Mustangs in the US are often used as symbols. For example, Nevada has in use a coin which depicts this horse. This breed is mentioned in many famous novels.

All famous car “Mustang” is also named after this horse.

Once upon a time the Indians were convinced that the horse is sacred if it has spots on the chest and head. They worshipped this animal and believed that it brings good luck in the war.

30 Comments on “Wild horses Mustangs. Horses in nature and agriculture”