Friesian horse is the pride of the inhabitants of the Northern provinces of the Netherlands –Friesland. It is called “Black pearl” for a bright appearance and unique characteristics. The breed was on the verge of extinction, but made a miraculous recovery. Today, the number of her admirers is growing despite high material costs required for its breeding and care. 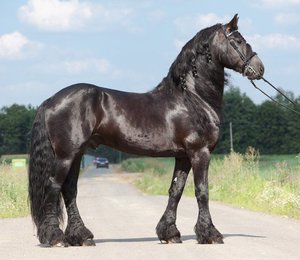 Friesian breed of horses refers to the Dutch bedrock. Its appearance was formed 7 years ago. In General, in the historical Chronicles mention of the friezes found previously for a thousand years, but their description can vary significantly with the appearance of the modern breed. At that time it was a low, unpretentious, hard-working horses. Frisian peasants gave them, and Frisian horsemen fought.

Aggressive violent process which lasted in Europe centuries introduced significant changes in the lives of people and changed the direction of breeding and selection of horses, particularly the Frisians. Grace and nobility of the lines, the horses brought in the times of Crusades from the East. Become king and the ability to have dressage horses from Barbary and Andalusian ancestors.

In the days of four wheel carriages and jousting tournaments, the horse should be stately and powerful, with agile and easily trained. Horses Friesian breed possessed all these qualities, therefore, to the XVII spread to many riding schools in Europe.

At the same time, the debut of frieze of horses as trotting on the ice, the Dutch lakes, glorifying them as the founders of many trotting breeds. Among the Frisians most often appear individuals, who were able to run briskly at a trot for a long time. Although the loftiness and power of the animal is not allowed to name the horses these horses, however, due to its beauty and vitality, the concept of “Frisian lynx” securely entrenched among the breeders.

The era of knights and kings are gone, taking with them the paraphernalia, and the majestic friezes rapidly losing popularity. The nobility was replaced by the bourgeoisie, and the peasants preferred the heavy draft horse, able to carry a big load and plow the field. The breed that was very popular in the past, they could permanently disappear, but there were caring people who recognized the value of national heritage.

In 1879 appeared the first Studbook of the Friesian horse. It was decided to make it register separately not only pure media, but also mixed. At the end of the 19th century, was born the “Society Studbook for Friesian horses whose purpose was breeding for agricultural purposes are medium-sized horses. However, this has not stopped a sharp decrease in the number of purebred animals, does not compete with varieties popular at the time. In the end, by 1913 there were 3 thoroughbred stallion in the world. From extinction to save a species could Dutch farmers, skrashivaya purebred animals with the Oldenburg breed.

In the 60-ies of the 20th century, the number of Friesian horses was 500 individuals. It was the second crisis. But the breed could once again be reborn, and to date Friesian horses — one of the most popular. They are used for equestrian sports and breeding.

Friesian breed of horses refers to a heavy animal, reaching a height of 160х165 see

These horses have their peculiarities:

The peculiarity of the Frisian horses are dense and long brushes (fascia) covering strong legs to the wrist joint, flowing to the black, large hooves.

Friezes characteristic of swinging high speed, which becomes most effective when the horse goes into a trot. Species cultivated in the “coach course” expressed the movement of the legs of the horse at the trot on a circular large amplitude. During such motion on a smooth ground speed is reduced, but on a soft (sand, snow) less costs.

The owners of the Frisians often training using a “Frisian harness”. This rope device with blocks, connecting the bit with each leg of the horse.

The nature and disposition of the frieze 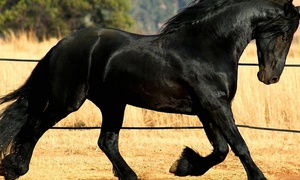 The main trait of the horse frieze – balance. These black horses are soft and friendly disposition. But external composure and calmness is hidden energetic temperament. This combination makes the breed popular among lovers of horse riding, and among professionals riding.

The Friesian horse is healthy and inquisitive, has an excellent memory and easy to train. Relatively undemanding animals can withstand changes in the weather. However, these horses are selective about the composition of the forage quality.

Modern state of the breed

Today the range of use of the Frisian horses are wide and varied from sports to circus entertainment and gaming. More and more people involved in competition driving, participate in eventing and dressage, and therefore, breeding work aimed at removing individuals with heightened athletic qualities. It is important that the frieze has not lost the elegance, the wit and easy nature.

According to the Royal Studbook of the Friesian horses (KFPS) in the world currently, there are 60,000 Frisians, while more than half of the population is located in the Netherlands. All horses entered in one of the sections of the stud book in the city of Drachten in the office. Each section has its own color forms, which can be used to determine the status of the stallion or the Mare not even knowing the language. In 11 countries its branches are entitled to issue documents and to evaluate to choose the young. Selection for breeding mares and stallions is very strictly. In addition to the requirements to the origin, horses have to show your quality of work, successfully passing the audit ke-rung.

In practice, the average rights of the producer awarded no more than hundreds of thousands of individuals.

Also KFPS registers each mating. The newborn foal is obligatory during the year, the implanted chip with the code.

KFPS has developed clear rules for the registration and purchase of horses Friesian, considering how important literacy is in the selection work. Animals, on the basis of intended use, are selected with certain characteristics. Buying the frieze, you should make sure that it has pedigree and passport numbers of microchips in both documents must match with a chip on the neck of the horse.

The countries KFPS members have their own national Association. Russia is NP “Breeders and fans of Friesian horses”.

The use of the breed 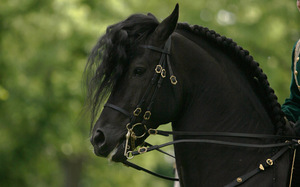 Friesian horses – universal. They both belong to the draught and riding, occupying an intermediate place between the horses of a Spanish type and heavy types. However, they have a clear four-wheel specialization.

Friesian horses take part in competitions of sled, circus shows, performances in dressage. Often they involve in the filming of historical films.

The versatility of the views expressed in the special manners and habits. Friezes are able to perform the most difficult elements while remaining draught horses.

As practice shows, frieze horse can handle even a novice at the time, how to control other species may be the only professional lovers.

2 Comments on “The horse-frieze, characteristic of the breed”