Thus, over 11 months of 2011, 10957 persons injured by animal bites on the territory of the Sverdlovsk region, including wild animals – 132 people were registered. Not fully captured and disposed of stray animals.

In the Sverdlovsk region, rabies “cleared up”

On the territory of 20 municipalities of the Sverdlovsk region there was an unfavorable situation for rabies, told about it in the press service of the regional Office of Rospotrebnadzor.

In addition, there has been an increase in the number of victims from attacks and pet bites. There are cases when there are no data on vaccination against rabies in domestic dogs and cats that have shown aggression. The risk of infection from contact with animals that have a laboratory-confirmed rabies diagnosis has affected 86 people.

The Department of Rospotrebnadzor in the Sverdlovsk region again draws the attention of citizens with pets to the need for annual vaccinations against rabies to their animals and the inadmissibility of interrupting the course of vaccination. Also, departmental experts ask citizens who have suffered from animal bites, not to stop the course of anti-rabies treatment without permission – for today refusals and interrupted treatment – in more than 40% of victims.

They also note that the spread of infection in the current season is also facilitated by the little snow that has settled in the Urals, when, due to a lack of food in the forests, wild animals rush to settlements.

The incident in June in the village of Dvor Savichi of the Bragin district of the Gomel region shocked and frightened people in the whole district. The experienced rabid wolf came out of the forest and attacked five elderly residents of the village and six domestic dogs. Fortunately, all the affected villagers survived, underwent a course of rabies vaccinations, now they feel fine …

However, the fear of being alone with a sick animal in humans remained. After all, visits of wild animals in these parts are not uncommon. Around – sparsely populated area, primeval forests, very close to the Polesye Radiological Reserve, where animals feel at ease. Not only wolves, but also foxes, raccoons, and boars from time to time appear in the local villages, causing anxiety and fear among the inhabitants, as evidenced by appeals to the editor.

The correspondent of NG, together with the heads of regional and district services and organizations on which the safety of people depends, went to the Bragin district to study the problem on the spot and discuss ways to solve it.

There are scars. And questions

In the village of Dvor Savichi, where a little more than three dozen people, mostly elderly, live, the meeting took place in a village shop, not far from which the chairman of the Chemerissky Village Council Adam Tsaryonok laid a double-barreled wolf that had done trouble.

“I rolled strawberries into the jars when I heard the cries of my husband.” So with a three-liter jar and ran out, began to beat off his grandfather. The wolf pounced on me, I fell, – Valentina Bereznyatskaya recalls with a shiver in her voice. – By weight it was a real calf. For a while was unconscious. Then the grandfather came to himself, again began to fight back, somehow caught the wolf to the gate and pushed him. Both have bites left scars on the hands, on the head. My grandfather has not yet recovered fingernails.

– I tried to score a wolf with a stick, but, as they say, it was not there. He clung to my hand, – says Leonid Boloban.

A resident of the village Natalya Titova called the chairman of the village council. Adam Tsarenok grabbed a shotgun and rushed to help people. An experienced hunter, he did not miss. And now he remembers that of the nearly forty wolves killed by him, this one, who knows no fear, is ready to torment everyone in his path, was one of the largest. One can only imagine what troubles he could have caused; do not catch him in time with a bullet from the chairman’s gun …

Everything is already experienced, agreed more than once, healed open wounds. But how did the scars on the bodies of the victims remain, so did the people, who was asked by Tatyana Karpenko, a resident of the village of Dvor Savichi, said:

“Can you make the animals not go to us?”

Lure the beast can not fool?

In the Bragin district, a decision was made obliging the forest guards and hunters to shoot not only wolves, foxes, but also stray dogs. But much depends on the civic activism of people, on how quickly they will report on uninvited guests. We saw a suspicious animal near the village – call 101, 102, these services will immediately respond. And if the beast is already in your yard, you can try to fight it off with an object, a stick or a shovel,

“A normal healthy animal comes to human dwell very rarely,” says Alexander Vasilenko, chief forester, first deputy general director of the Gomel State Production Forestry Association, with knowledge. – Our main task is to reduce the spread of rabies among wild animals. We have learned how to vaccinate them: we scatter lures along the roads with a vaccine that produces immunity to the rabies virus in an animal.

In the Bragin district, including in the reserve, this work is also being done, says the chief veterinarian of the district, Anastasia Abashina. But how effective is this method of dealing with rabies?

Not really, says Alexander Vasilenko. To achieve the desired effect, the bait vaccine must be scattered at the same time over the forests of the whole country – to organize a sort of “bait attack”. This requires coherence in the actions and use of aviation. The case is quite expensive. So the fight against the virus while the pinpoint and rabid animals still sometimes appear in the courtyards of the villagers …

For mined wolf and cartridge can not buy?

But there are still hunters who must regulate the population of animals even in the reserve. After all, the time is not the same, the same wolves can be so fertile that they will not be drawn to people by a disease, but an elementary hunger with the same terrible consequences for people …

Indeed, says Alexander Vasilenko, according to a specially developed methodology, wild animals are taken into account annually, they set the standards for shooting, the hunters compete with each other, who will get the “unwanted” beast more. Unfortunately, recently these competitions are not supported financially, as a result, the hunters lose their incentive …

“For 10–15 years, our district brigade of hunters ranked first in shooting, received awards,” says Fyodor Bobrinok, chairman of the Bragin Society of Hunters and Fishermen. hunters who come to grips with the beast, crumbs stand out. Meanwhile, one cartridge costs 15-17 thousand rubles today. And the cost of transport. Last year, the villagers were disturbed by the fox invasion near Bragin – they swatted many chickens from their private farms. The regional authorities were informed, the information went to Minsk, the funds were found. We shot about 180 foxes. It is necessary to resume cost recovery and bonuses for every head that is gained in order to stimulate the hunters …

This turned out to be an interesting conversation at the suggestion of “NG”. The main thing is that people now know that they are not alone with their problem, that when they hear a wolf howl not far from home on an early winter evening, they can call and call for help that will certainly come. But how to make sure that this assistance was not necessary or that it was held not only on duty and enthusiasm – this question remains open …

PS While the material was being prepared, it became known that two wolves were seen near the village of Grushnoye, which is one and a half kilometers from the Savichi Yard. Local hunters promptly reacted to the message of the villagers and took measures to destroy dangerous predators. However, due to the strong wind of the animals, it was only possible to hurt, they disappeared into the forest.

According to the regional council of the Belarusian Society of Hunters and Fishermen, in the Gomel region last year 250 wolves were harvested, since the beginning of this year – about 200. 1025 and about 1000 were shot, respectively, a significant part of them were infected with rabies virus.

According to the information of the Gomel Regional Center for Hygiene, Epidemiology and Public Health, for 10 months of this year, the increase in rabies among animals by 30 percent exceeded the same indicator of last year in the region.

On the same day, the participants of the departure to the Bragin district held a meeting with the staff of the state educational institution “Chemeris educational and pedagogical complex”. It was about the frenzy of not only wild animals, but also those who live near us. From the mouth of the experts sounded important information that should be remembered to each of us:

The most dangerous places for biting are the arms, legs, neck, head area. Saliva, wool, getting on the skin of a person, where there may be microcracks, also transmit the virus.

Before the arrival of the ambulance, the injured person or his relatives can treat the bite sites with laundry soap. It should be rubbed within 10 minutes, it is advisable to wash deeper wounds with soap and water using a syringe or a spray bottle.

A sick animal is subject to mandatory destruction. Doghouse, litter next to it burned. In the living room it is necessary to carry out thorough disinfection and destroy things with which the animal came into contact … 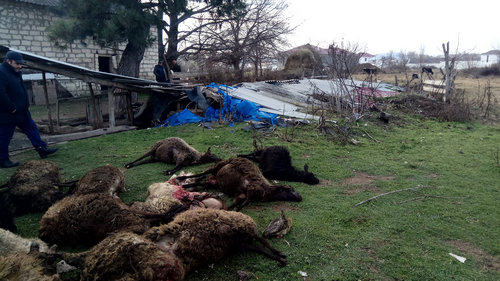