Great grey Shrike — a very rare bird. To meet him in the wild is extremely difficult. This requires a long time to sit and wait for her. Besides, the population of this species plummeted, and the bird was listed in the Red book. 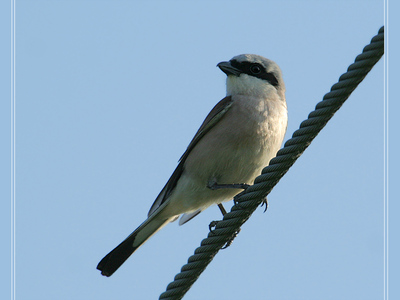 The first who described this species, is the founder of binominarny nomenclature Carl Linnaeus, he did it in the middle of the XVIII century.

This species comes from the family sorokafutovykh. Their closest ancestors are the corvids, i.e. crows. According to scientists, these families lived in the Miocene (about six million years ago). It is believed that the place of occurrence of the first modern representatives of Shrikes is the place between Minor and Central Asia.

This bird is relatively large. So, the size of her body in adult birds, on average, is about 25 inches, and weight of the Shrike is equal to 70 grams. Wingspan birds of medium size is about 36 inches. Great grey Shrike has a bright coloring, back decorated in shades of gray, and the belly is white. As well as, the breast of poultry flaunts figure. The wings and tail are bright black and at their edges there is a white stripe. The head of a Shrike has a white stripe from the beak to the eyes there is a black mask. At the same time, females and males appearance did not differ.

In males, the voice consists of various short but beautiful trills along with gurgling whistles. It sounds approximately so: “Tu-Tu CRE-Priya-Priya” or “TRR-TRR..Tur-Tur”. In times of danger or when males feel anxious, then they make a long, but sharp whistle. And to attract the attention of females, males combine the whistling with the song. To communicate among themselves they use a quieter whistle. 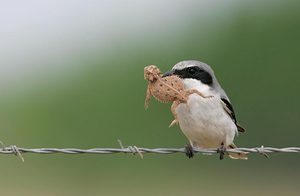 The main habitat of the great grey Shrike are areas with temperate and subarctic climates in the Northern hemisphere of the planet. Basically, settle in Eurasia, North America and Central Asia.

Some species of Shrike are sedentary and do not make flights to other places. This applies to birds living on Sakhalin and the Kuril Islands. The remaining members of the family sorokafutovykh, with the approaching cold of winter will fly South to the dry steppe. However, all populations of this species are individuals who, generally, will not fly and remain in place.

Grey Shrikes mainly inhabit open areas, since it is advantageous to take high places with a wide field of view this allows them to hunt successfully.

Shrikes can hunt anyone you want. But mostly, they feed on small birds and insects. There were cases when the victim of the Shrike, trying to escape from a hunter, fell into the hands of people, but that didn’t stop the predator, and he snatched his prey out of the hands of man. The prey birds are hung on the branches near the nest, then proceed with the cutting of the corpse. That is what this bird was called the butcher. When production a lot, they leave their victims half-eaten or even intact. So, according to scientists, they teach their offspring to hunt.

Shrikes are birds of prey. So, taking a good position to track his victim, waiting, and then instantly attack. And can attack both on land production, and on air. Then they carry the prey to its nest and eat it there. The bird has a very well developed instinct of a predator, they can hunt and not to feel this hunger.

Representatives of this species are very aggressive, so if someone comes into their territory, they instantly attack the enemy, even if it is many times more than the Shrike.

Shrikes are fearlessness, for them there is no difference whom to attack. They’re also not afraid of people and unable to settle directly near the apiary, where you will calm eat the bees.

The nest of the grey Shrike has a relatively large size. Building a house always involved females. In order to build a nest, females pick up a branch on the tree. Usually the nest is built on low altitude, about two meters. They do this in order to make it easier to bring the prey of large size.

Lay eggs Shrikes in the area of mid-spring, and in colder habitats in early summer. At a time birds lay about five eggs that have a green tint with dark spots. Hatching eggs does the female, and the male only occasionally replaces it. The incubation lasts about two weeks. After hatching, parents take care of their offspring for up to twenty days. After this time the Chicks are ready to go for your first flight. Feed their young usually small insects, but sometimes can give caterpillars or larvae.

There are about a dozen types found of this bird.

In Russia the most common grey and red-backed Shrike.