Ordinary river or gull black-headed gull (lat. сhroicocephalus ridibundus) is a member of the family of gull Charadriiformes. The habitat of black-headed gulls East coast of Canada and Eurasia. The birds that live in the West of Europe, a sedentary life, rest of winter, fly to the South. Birds living in the territory of Canada for the winter move South.

In Russia colonies of gulls river, the size of which can be several thousand, can be seen in the summer on freshwater ponds. Usually birds settle near food dumps and major cities. 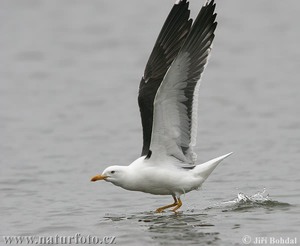 Do gulls have a feature: the front part of the wing is surrounded by a wide white stripe and the rear black. In summer, head to the back of my head chocolate brown colors, light colors contrast sharply with the dark, clearly shows how the eye is surrounded by white thin ring, the beak is dark red slightly curved, on the mandible you can see the bright red spot.

Mostly the coat color of pink and white, but base color of the wings is considered to be gray. Limbs same color as the beak. In winter the head becomes pure white, with pronounced dark brown spots on each side.

Young birds have gray-brown color of the head and torso. On their wings you can see a large number of red and brown spots. The beak and legs they have a dark yellow color, the tail with a dark brown stripe. 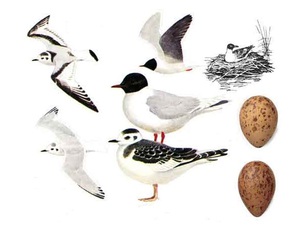 River gulls nest in colonies, often in the same place with other birds of the family of gull; river or white-winged black tern. To build nests, use a variety of wetland plants, often with stems of reeds. The clutch usually are olive or buff eggs with spots from 2 to 3 pieces. Laying starts in late may and continues until mid-summer. Incubate the females about a month (21-25 days). Young Chicks are fed by parents up to three weeks so they can begin to fly. 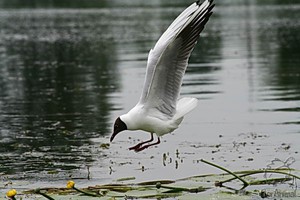 The diet of birds is varied. River gull feeds on insects and invertebrates (dragonflies, beetles, their larvae, earthworms, etc.), as well as berries, seeds, fish, small rodents and food scraps.

Insects mostly caught in flight, and the rest of the food is produced on land and from the water surface.

Behavior and daily activity of birds

Active black-headed gull constantly, day and night, including during the breeding season; also migrates, and night and day. There are two peak activity of birds is early morning and evening. In Western Europe in winter roosting birds accumulate to 100 thousand individuals.

Black-headed gull begins to breed at the age from 1 year to 4 years, and the female has a tendency to earlier reproduction. 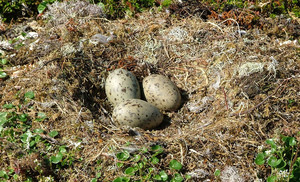 Nesting gulls in mixed colonies. Location of colonies in the absence of adverse factors are constant and can be preserved for several years. Migratory birds arrive to breeding grounds much earlier than uncovered ponds and there are first thawed patches. More often it occurs in late March or mid-April.

After the arrival of black-headed gulls kept close to each other and wander in search of food. This spring bright expressed their demonstrative behavior, the male with cries pursues the female in the air, pulling the head forward. At the time of pair formation, the female bends her head, begging, thus, the food, and the male feeds her.

For the future of choose bird nest inaccessible to predators place — splainin marshy, grassy island, peatlands, lowland swamps, sometimes on a coastal meadow. Secured territory around the nest is about 47 cm, the distance between nests in dense colonies from 50 cm to several tens of meters in sparse colonies. 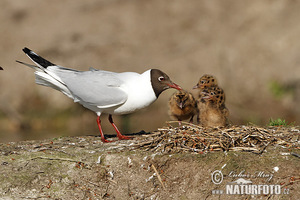 If a colony appeared uninvited guest begins a General loud commotion, birds start circling near the nest, screaming and showering the offending droppings.

Once the Chicks hatch, the parents feed them out of his beak. In young Chicks body is covered with buff-brown feathers with black-brown spots, the color of which allows them to blend in with the environment. To fly, the young Chicks start after three to four weeks. 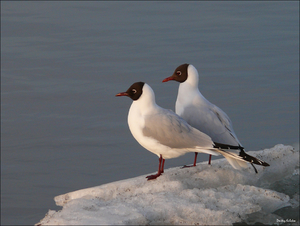 Leave the breeding places of black-headed gulls just after the young birds begin to fly. Migration depends on the local conditions, when it falls mainly in the third decade of June and lasts until early August.

Black-headed gull is able to wander after the nesting this is especially true for birds that live far from the border of the area and have non-directional in nature; birds, living close to the borders of the area have direction and are capable of its breeding to extend the range.

Distant wintering birds starts in mid-December, and in February their number in these places is reduced. For the next hibernation (for example, in the South-West Baltic) black-headed gulls are at the end of October and remain there until November, sometimes mid-March. The timing of arrival of birds depend on the spring weather, but it arrives black-headed gull ever before. 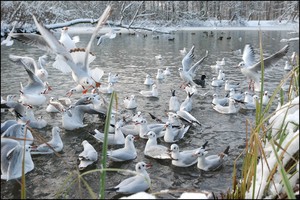 Birds nesting to the East and North of the January isotherm of 2.5° C, are considered as migrants and arrive on the British Isles and the Mediterranean basin. Settled mostly adult birds, and young birds that inhabit the intermediate area of the territory — migrants.

In a large number of black-headed gulls fly in almost all European countries, in particular, where there is no ice in the winter (for example, the Mediterranean, the Caspian sea, the Black sea coast, and Indian and Pacific ocean surrounding the Eastern and southern coast of the Asian continent).

In the last ten years, black-headed gull has wintered on the coast of North America: the territory is located from the island of Newfoundland to new York. Also in Mali and Niger (crossing the Sahara), countries of the southern and Eastern coast of Africa, in Tanzania and Kenya, where the number of wintering gulls river associated with the number of birds wintering in the territory of the former USSR.

For gulls, wintering in the territory of the former USSR, migration, and wintering most accurately studied in the East Baltic population, which combines birds of the following countries:

These birds fly in the winter in the vast territory of the Canary Islands, and North-Western coast of Africa, the territory in which they arrive, lasts up to the East coast of the Black sea; also, the Bahamas and the Caspian sea. 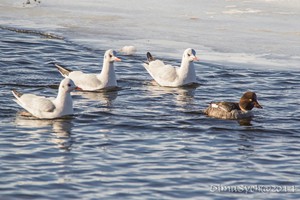 The most common places of wintering of this population are considered: the Baltic sea in the West, which occupies the territory to the South of Denmark and Switzerland; North Eastern Germany and the North sea coast, which includes the North-West of West Germany, Belgium, Netherlands, Northern coast of France, southern British Isles, the coast of the Iberian Peninsula; the rivers and lakes inside the continent (in Germany, Hungary and Switzerland); Western Mediterranean; Adriatic sea on the North; the valley of the Po river and the South of France.

Wintering in these areas are achieved in two ways:

Black-headed gulls that nest on the North Baltic region, more inclined to the first path of flight, and birds nesting in the South — to the second. 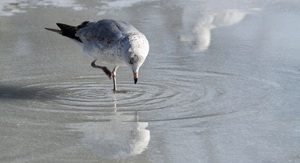 Gulls inhabiting the Central regions of the European part of Russia (in the areas of: Moscow, Ryazan, Ivanovo and Yaroslavl) overwinter in the area from Western France to the Caspian sea in the East, but their main wintering is the Black sea coast and the southeastern coast of the Azov sea and the coast of Yugoslavia, Italy, Greece, the Mediterranean in the East (mouth of the Nile, Cyprus, Lebanon, etc.), upper and middle course of the Danube and Switzerland.

During the migration to the places of their wintering gulls are delayed by around 2.5 — 3 months in the lower and middle reaches of the Dnieper, on the Azov sea, and lower reaches of the don, which gives reason to believe that they have a place intermediate the flights.