A family of blackbirds has tens of types. The Fieldfare is one of the largest representatives of these birds. Not so long ago such a thrush could not be found in the city landscape, it was purely a forest dweller. Now in connection with the search for food, he became a frequent visitor of parks, squares, gardens, city streets, planted with mountain ash. In Russia, it prefers areas of Siberia, is ubiquitous in Europe. 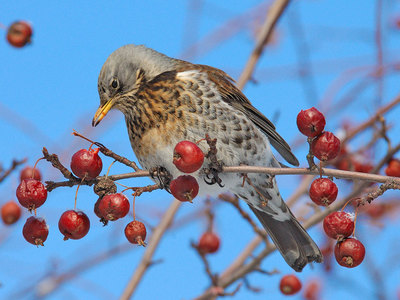 But in the Caucasus, Central Asia and Northern Africa thrush can be seen as a migratory visitor.

Young birds look like adults, except their plumage slightly less bright. The life expectancy of Fieldfare in the wild – 10-17 years. 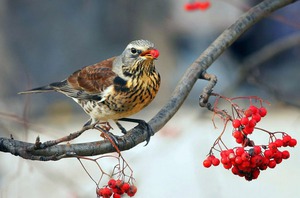 Part of the population of these birds lead a sedentary way of life, others tend to migrate. Thrushes, the fieldfares do not tolerate hunger, so in the absence of food birds go to warmer climes. During the flight, many of them die. Several harsh winters in a row can significantly reduce their population.

The of the Snowbird a lot in common with another type – belobrovik a Blackbird. Often birds form joint flocks, as a way of life and diet they have similarities. Staying close to the bushes of mountain ash, thrushes aggressively drive away from the feeding areas of the competition. 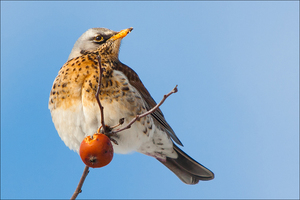 The Fieldfare has an interesting feature. Attacking the enemy, the bird bombards him with their droppings. For other birds it is a direct threat, as glued together with droppings and feathers do not allow them to fly. People do not just happen to fall under such attacks.

It is a noisy bird, the Fieldfare has a very unpleasant voice, reminiscent of a crackle and bubbling sound.Especially sharply chatter of the Blackbird sounds during fear or discontent. The singing of the thrush, Fieldfare also can not be called great, he sings rarely. 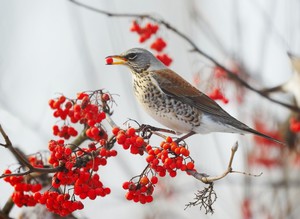 When thrush annoyed, his tail cocked upwards and relatives just see his willingness to join the fray.

The fieldfares easy to provoke scandal, and some birds learned to use it. For example, a flock of crows uses this trick: while some distract their parents, causing their anger, other predator brazenly abducted from the nest eggs. 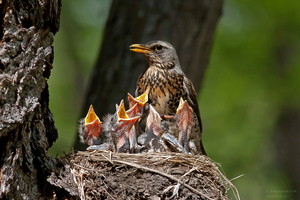 More diverse all the fieldfares feed on in the summer. The basis of their forage this time of year are a variety of insects, earthworms, snails and spiders. Since the ripening of berries, particularly Rowan, blackbirds switch to them. Because of these preferences, this kind of thrush called a Fieldfare.

By the way, apples and pears they are also a good choice. The berries and fruits they can peck right on the branches and collect from the ground. The fieldfares – known sweet tooth.

If the crop of mountain ash was plentiful, thrushes remain on wintering in his native place. In winter, birds willingly eat berries of viburnum, rose hips, sea buckthorn, and elderberry.

In the last month of winter, when forage in the trees remains, the thrushes, the fieldfares feed on invertebrate animals from the ice-free waters. In the spring the birds their food is produced on the newly ploughed fields, turning over the clods of earth in search of insect larvae.

Before breeding the offspring of a pair of blackbirds starting to build a nest. Rather, it builds the female, and the male takes over security functions. This building is a large Cup made of dry grass and bonded particles of clay and solid roots.

Inside birds line their nests with soft bedding. Attach your nest thrushes, the fieldfares in the fork of thick branches to have a reliable support.

The colony is usually formed by 5-6 pairs, sometimes more, flocks of fieldfares a few.

Benefits and harms of Fieldfare 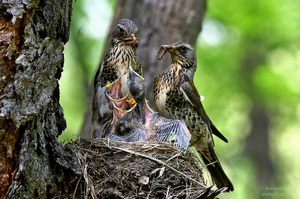 This kind of thrush though and can eat a wild bitter ash, but tasted varietal berries, pecks them first well before reaching maturity.

So if a flock of these birds attacked your mountain ash in the garden to eat berries you are unlikely. Birds have good memory, remembering places of feeding, the following year, they not only return there, but will bring relatives.

In agricultural lands the fieldfares can cause damage to strawberry plantations, attacking them in packs. Then birds fly into the woods, where they feed on berries, and by the end of summer can once again return to peck cherries, currants, apples, pears.

But space invaders is extremely necessary and the mountain ash. The fact that under the influence of gastric juice there is an increase in seed germination. Undigested seeds go along with the dung and in the future easily germinate and take root. Some gardeners deliberately use this property in order to obtain seedlings of mountain ash of her bones.