Thrush is the most common migratory bird in Russia. But it is known not only for that: after all, the Blackbird still has a beautiful voice of a chorister. 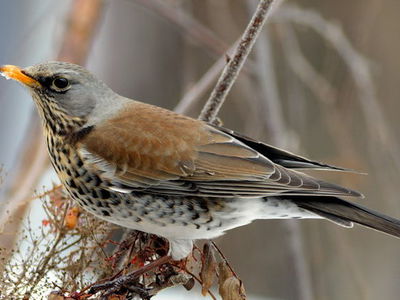 But what else is known about these birds? How do they look? What to eat? Where you live and what types are there? All this will be discussed below.

Thrushes belong to the order Passeriformes and the family Drozdov. In the Russian forests can meet of about 20 species of this songbird, and all of the world there are about 60 species of this bird.

In Russia and the CIS inhabit the following types: 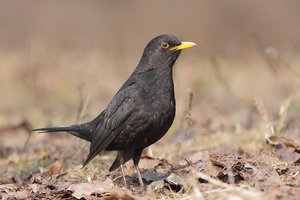 In General, the size will depend on the species, and some thrushes weigh 50 grams, the other about 180 g. the same applies to the length of the body.

Characteristic external features of these birds are short, the beak is yellow or gray, and a very mediocre, dull plumage. Also, depending on the species, the thrush can be speckled gray or solid black. The nature of this bird is difficult, one might even say hectic. For example, repulsed from the pack, a thrush begins to yell and panic.

By the way, thrush is difficult to distinguish the female from the male, because they have exactly the same color of the plumage.

How to multiply blackbirds 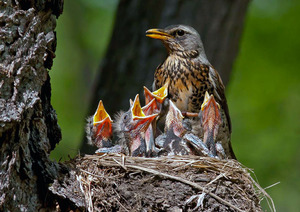 This bird is building its nest in the spring, choosing the shrubs or trees are not higher than 5-6 m. Often they can choose for this purpose the high grass, an old stump or even be on the ground. Themselves nests weaved from twigs, lichen, moss, dry grass and leaves, everything is sealed with clay. Housing turns not only reliable, but also spacious, it is insulated with feathers and down.

The female can lay eggs twice a year. In the masonry may be up to 6 eggs, blue or greenish-blue color with small brown speckles. The first clutch, the female makes at the turn of April and may, the second in late June or early July. Chicks hatch about 2 weeks.

The first two weeks hatched Chicks are completely dependent on their feathered parents. Those, in turn, about 200 times a day fly over the berries, seeds and insects to feed offspring.

Two weeks later, the juveniles begin to get out of the nest and learning to fly, however, still continues to be fed parents produced food. In this period most of the Chicks are killed, leaving only the hardiest.

How to eat blackbirds 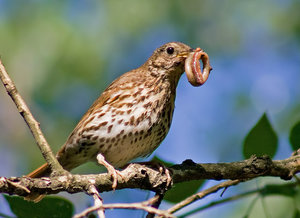 The food of these birds is entirely dependent on the time of year. For example, in the winter they get their berries, seeds or fruit. And when a sufficient amount of winter feed thrushes and does not fly away for the winter.

In summer the Blackbird, especially as a Fieldfare, turns into a real pest and the enemy of all gardeners, so as the food goes it is in gardens, where it destroys the harvest of berries, for example strawberries, cherries, cherry, honeysuckle. You can often see a Blackbird in the gardens and fruit trees. But besides this, love to hunt such birds, and various insects, snails, larvae, worms.

Below will be described three main types of these birds, which are found in the Russian forests:

Interesting and ambiguous role played by these birds in human life: on the one hand, they are able to destroy the crop, and with another — actively eat insects.

We can say that these birds maintained a balance in nature.

4 Comments on “Looks like the bird is the Blackbird, her food and the types of”