Practically every citizen of Russia at least once in my life met small, like Sparrow, bird Chaffinch. Despite the resemblance to the Sparrow, to distinguish between these two representatives of passerine will not be difficult.

Finches have a more bright color, especially males. They can brag to fellow colorful red breast, blue head and brown with a green tint back.

Females nature has endowed less remarkable coloration, their plumage is not surprised by the brightness of colours, it looks faded compared to males. Under natural conditions these birds rarely live to three years of age, while in captivity can live more than ten years.

Should look to the external appearance of these birds. Many have noted the similarities with the sparrows, but the color of finches is their hallmark.

Stand out males of this species:

In the fall the bird begins molting and the new plumage of the males becomes as faded as that of females. Then the colors gain saturation, and in the mating season, more vivid and provocative.

The color of the finches beak changes depending on the time of year. In winter it acquires a brownish tinge, and in the spring and summer and bluish.

Color of females is not surprising riot of colors. Their plumage is painted in a pale color. This is necessary in order to make the bird less conspicuous to predators. Especially this color helps in the period of incubation. The female merges with the surrounding landscape and does not attract the attention of undesirable persons. Female finches feathers brown on the back, chest colored the same as males. Overall, their color is made in a more restrained tone, and has dark green tide.

Grown Chicks are painted in the same plumage as the females, but then, at the first molt as adult birds, their feathers get the desired color, depending on the sex

The habitat for the common Chaffinch

Ordinary finches inhabit the entire territory of Russia and Europe. Still they can be found in North Africa and in Asia. Ornithologists say the finches are truly unique creatures and this opinion was fully justified. Despite its small size, these birds can easily fly long distances, seas and oceans. To settle finches prefer forests, but due to the large number of cities, these birds can be found in urban parks, gardens and squares. People are calm and have learned to get from this neighborhood benefit and their own benefit.

Though the finches and are considered migratory birds, but some flocks prefer to stay at home for the winter and do well with the cold winter climate. Other birds in late summer are starting to stray into groups of fifty or a hundred individuals, and in September flying to Central Europe, Asia, Crimea and Kazakhstan. There they wait out the harsh Russian winter and spring back home. 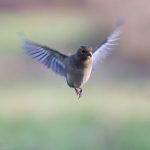 Not all flocks make long flights, some individuals just prefer to move to neighboring southern regions and stay there for the winter. During the flight to the South of the finches with a speed of approximately fifty-five miles per hour. Periodically birds stop for a few days, where we rest and feed.

Finches left to spend the winter in his home region, too, gather in groups and to winter time move from forests to meadows, fields and other open areas. They often beat the finches or sparrows and finches graciously accept them into their pack.

The bird’s name Finch came from such words as to feel cold and shiver as they fly away to warmer climes only with the onset of cold weather, and return home in the early spring. Our ancestors had a lot of take related to these wonderful birds, for example, they believed that the Finch sings to frost, and if it is found in the winter or in early spring, it is warming. In Latin, the name of this bird sounds like Fringilla, which means cold.

Ornithologists divide the finches on the:

The lifestyle of these birds depends on the geography of their habitat.

Finches fly pretty fast, and the earth move by jumping. These birds are virtuoso singers. They have a pleasant, clear and loud voice, like a lark, but has a varying personality. 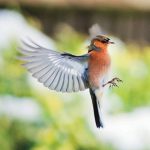 Finch songs consist of the three second songs. Between them, the bird makes a short pause. Young individuals are characterized by simplicity of performance, but gradually learn from more Mature individuals, gain experience and improve their skills.

Ornithologists have noted that finches of different regions differ from each other with their sounds. If Chaffinch is a nomad and periodically change their place of residence, then after a while after the flight, his songs are similar to songs new neighbors. Each of Chaffinch repertoire, which includes a maximum of ten songs, the bird takes them in turn.

With finches it is possible to predict the weather. Experts have spotted a pattern – if a bird sings a song reminiscent of the sounds of “ryu-ryu”, then soon it’s gonna rain. Singing chaffinches begin immediately after returning from hibernation, and ends in July.

Before flying to warmer climes birds are singing softly and very rarely or not sing at all. Finches, which are found in the home, begin your song in the middle of winter.

In recent years, many fans songbirds tend to acquire Chaffinch. But these creatures are not meant for keeping in the home. Finches – wild birds, they feel very uncomfortable in a cage, stressed and don’t stop trying to get out. In such cramped conditions in the finches may experience problems with eyes or obese. And to pick up food for these birds is problematic.

Food the finches eat plants and various insects. These birds have strong beaks, strong facial muscles and a special structure of the sky that allows them to crack hard shells and shells of bugs.

Often farmers are accused of chaffinches in the spoilage of crops, but these birds can safely be called assistants. They are in large numbers are destroying the seeds of weeds, than have a significant benefit to the field of cultural plantings and woodlands.

With wintering flocks of females and males are returned separately. Birds-the boys arrive early to occupy a territory for future nesting. Then the males begin to sing songs similar to the chirp of the birds, thus luring females into their possession.

The period of reproduction in finches starts in the early spring. While selecting males choose separate sections that have their boundaries and vary in size. Adult individuals every year choose the same place. Finches are closely monitoring the borders of their possessions and wandered competitor is immediately expelled out. Often the young in fights with more Mature males to defend their territory or to narrow.

In the mating season the males finches behave like real bullies. They can argue and fight among themselves, vying to sing songs to each other. The female chooses the male and the attracted flies closer to him. She then proceeds to get acquainted.

In order to meet any cavalier girls finches do so:

All these actions are accompanied by a quiet beeping, like “zi-zi”. Met so birds on the ground or on the branches of the tree.

After about a month the birds begin to build nests. The main thing in this case is the female, the male also appears as an assistant. Ornithologists have discovered that creating home the female has to fly over content is not less than one thousand three hundred times. Nests finches build almost anywhere, but most often they can be seen at a height of four meters, among the branches of a tree.

Approximately one week lasts for nest construction, the finished design resembles a Cup with a diameter of up to one hundred centimeters.

For the construction of a dwelling birds use:

All materials are fastened together by webs.

Nest walls are very durable, they can reach a thickness of two inches. The external part of the dwelling, birds, trim the moss and bark of trees. Inside the nest will become available, consisting of down, feathers and hairs of animals. So warm and well-camouflaged shelter.

Females lay three to six greenish with red speckles eggs. While she is engaged in hatching Chicks, be responsible for the care and feeding of the mother assumes the male. Approximately two weeks after laying the Chicks appear. At first they have bare red skin and a little dark cannon on the head and back.

First, the kids absolutely helpless, and the parents alone procure them food and put the Chicks right in the beak. At this time in any case impossible to approach the nests of these birds because they can fly and don’t vernuche. In this case, the Chicks are doomed to starvation or death from predators.

Closer to the middle of June, the Chicks are covered in their first plumage, gain strength, and will make attempts of departure from the nest. Parents about a month will accompany and help them in flying.

Finches are dying most often from carelessness and negligence, from the clutches of predators or humans.