Regular, though a little humid in the summer meadows, in early spring, after the snow melts and the rivers turn into small ponds. In the summer there is a high juicy green grass on the belt, and early spring the water, but very shallow. And at this time there are a lot of birds: black-and-white Lapwings with a tuft on the head and unusual voices, seagulls, ducks, and many waders. Here they build nests, lay eggs and hatching. Today’s story is about a small gray kulychka with a very long and a little up curved beak. He called Terek Sandpiper, or, in Latin, Xenus cinereus.

The first time I was able to see him on the shore like either puddles, or lakes, when I looked for a small prigorochka, and he briskly walked along the water’s edge, immersed in her own long bill and pulling out any boogers. Noticing me, the bird took off, but did not immediately hide in the Bush, and flew to the middle of the lake, sat on the speakers out of the water a snag and continued their search for insects, as if chuckling over me: I can see you, but you’re far away and can’t reach me. Indeed, the distance was too big even for my telephoto lens. The second meeting was much more unexpected: we go together from the forest by this pond, not bothering anyone, when suddenly from under the legs something head over heels crash, and even rolling, and not limping to the water, where frantically trying to take off.

I really thought that accidentally stepped on the bird. My companion, by the way, was of the same opinion. But, a little pogromov, and relegating us to a safe distance, Terek Sandpiper and takes off as if nothing had happened flies away into the distance. Such a simple maneuver, natural pretense she took us out from the nest. But there is literally 10 cm from my foot directly in the ground among last year’s oak leaves, a small hole lined with grass, and in her four speckled eggs of a light olive color with brown speckles. You can go two steps and ignore the nest and sitting on it the bird. 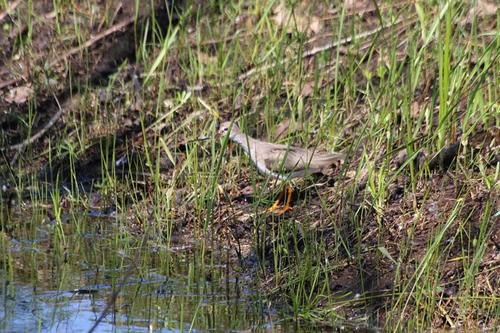 Terek Sandpiper is a small, very much alive and active Kulik. Well distinguished from other waders monotonous grayish-brown plumage, with binoculars you could see two darker stripes on the back (on the shoulder). The bill is long, slender, curved upwards. Very rare Terek Sandpiper sits on the trees (mostly willow shrubs). 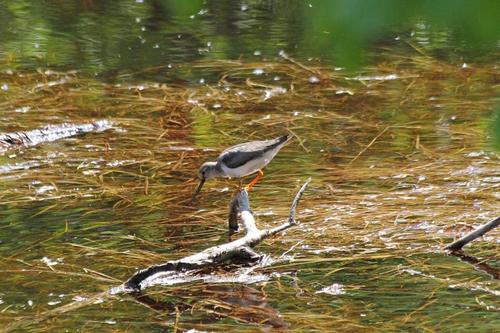 The size of a thrush. Addition and color similar to the carrier, but is somewhat larger and stocky. The main characteristic of Terek sandpipers that distinguish it from other beketovyh birds — long, flattened and noticeably curved upwards beak (similar to the shape of the beak is also found in the Avocet. and related birds). The base of the beak yellow, the remainder black or brownish-black. Legs rather short, yellow, orange or gray-green (the latter option is usually the old birds). The iris is brown. The total length of 22-25 cm, a wingspan of 38-42 cm, weight 55-120 g. 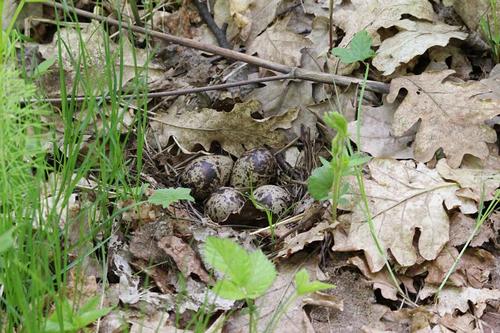 Sexual differences in color are absent. Eyebrow light. The upperparts are brownish or smoky-gray with dark spots, underparts are white with brown longitudinal lines on the neck and chest. Summer on the shoulder blades along the back developed two black bands most of the endangered birds after the autumn moult. In flight on the wing is clearly visible broad white band — like a herbalist, but a little narrower and not so contrasting. The lower part of the wing entirely white. Winter clothes in General like summer, but more monotonous — the bright parts of the plumage are absent or barely noticeable. Birds the first year of life on top of a darker brown with a rufous or Buffy edges of feathers. 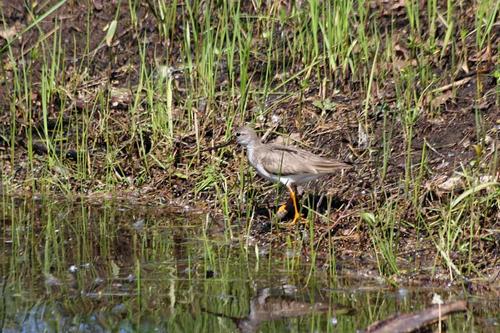 Terek Sandpiper mainly breeds in forest swamps, but sometimes also in the tundra and steppe marshes. Nesting selects the banks of rivers and lakes, swampy and heavily overgrown with shrubs and sedges. Particularly favorable, apparently, a winding river, in the floodplain which formed a large number of ponds and puddles, interspersed meadows, overgrown with willow, Kuga, homem etc.; swampy mud shores. 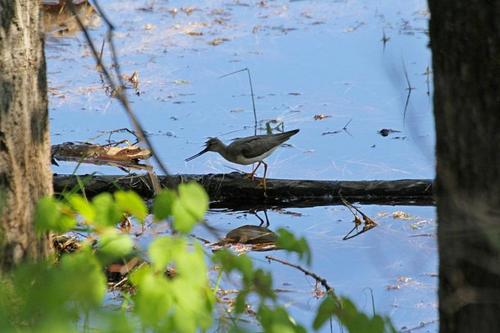 Widespread in Eastern Europe and Siberia, mostly in Russia. A typical migratory bird, it winters in the tropics along the sea coasts of Africa, Asia and Australasia. Breeds in forest, forest-tundra, forest-steppe zones of Eurasia from Finland, Belarus and Northern Ukraine eastward to the Chukchi ridge and the Anadyr basin. Sometimes penetrates into the southern part of the shrub tundra. 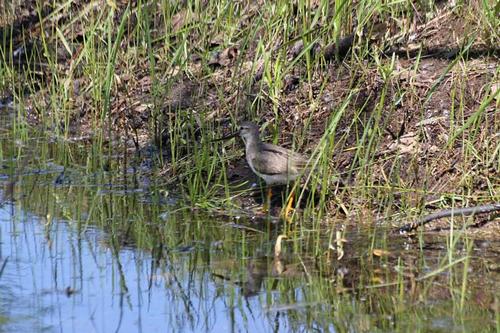 During the breeding period it inhabits the muddy banks of freshwater bodies, covered with low semi-aquatic vegetation. Often lodges in the valleys of meandering rivers, which abound with channel oxbow lakes, puddles and littered with flood debris mud shoals, and the shores consist of meadows with dense thickets of willow, wild cherry, rushes, horsetail and other plants. A necessary condition of habitat in the breeding period are the marshy areas of the shore, consisting of nessaderevko of soil — silt, sand or peat. The greatest density of settlements in the Northern reaches of the forest zones and some parts of the tundra, where it often settles on the outskirts of the forest of swamps, lakes and sluggish deaf shaded rivers. On the other hand, in the middle zone of Russia is considered a rare species. If the summer Terek Sandpiper inhabits only the interior fresh water in the winter in most cases lives on the coast, where it adheres to silty, rarely sandy beaches. During low tide the waders feed on freed from water areas of the sea, at high tide, resting on rising above the water the roots of mangrove plants. 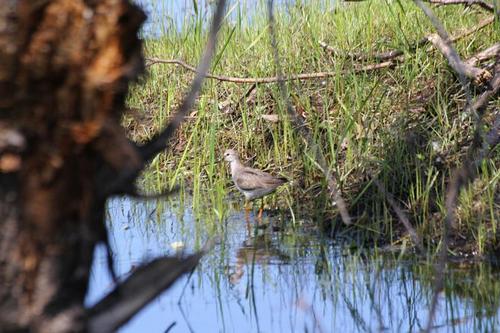 The main food during the breeding period adult and larval midges, predaceous diving beetles, ground beetles (ground beetles, Rove beetles, weevils, leaf beetles, scarab). According to observations in the valley of the Pechora, in the stomachs of birds in late may-early June in addition to insects found algae and a large number of gastroliths — small stones, necessary for grinding the food. On migration the diet more varied, includes a variety of insects, small molluscs, crustaceans (including crabs), spiders and annelid worms. Birds often feed in shallow water or on mud and sand banks near the water’s edge. In search of food Terek Sandpiper usually slightly bends his legs and tilts the beak at a very small angle to the surface of the water, and then drives it from side to side. On land, soil probes, plunging the beak in the soft substrate, often the entire length of the beak. Catching larger prey, birds often flee along with her to the running water in which to rinse before swallowing. 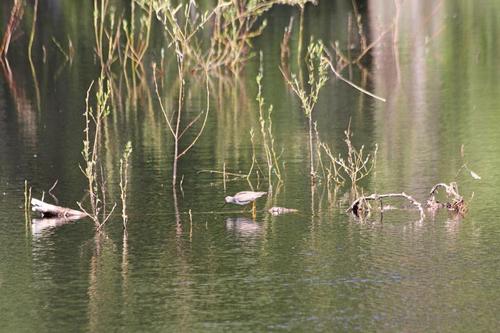 In the spring of Terek sandpipers usually arrive in the midst of the floods in mid-April on the southern periphery and in the second half of may in Northern. On migration often holds flocks of 10-18 species, rarely flies alone or in company with other waders. Being a monogamous bird, the bird sometimes remains loyal partner for several years in a row. Pairing occurs in breeding areas, which is preceded by a noisy mating behavior of males. Takuya standing on the shore Sandpiper lifts the tail and trembling wings, while shaking the whole body and wide opens beak. In the mating flight, the male flies in an oblique line up, a few seconds flutters its wings in one place and without the strokes, in the same oblique line slides down. In both cases, the mating is accompanied by a characteristic ringing cries, heard at a great distance. 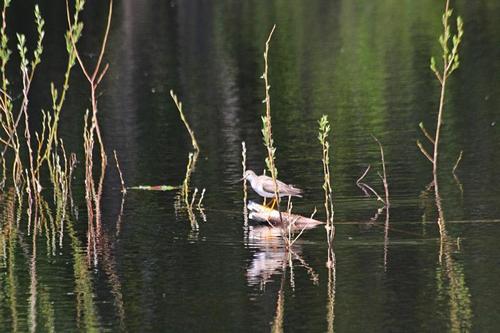 Breeds in separate pairs or in small loose colonies, together with porucheniem, Lapwings, Veretennikov, Fifi, Terriers and other marsh birds. The nesting construction of the primitive is a hole with a depth of about 31 mm and a diameter of 90 to 92 mm, lined with a variety of collected nearby materials — pieces of bark, sawdust, stalks of grass, fragments of cane, shells and other forest debris. The composition and abundance of pavement may be different even among neighbor breeding birds, not to mention the criteria that are characteristic of the species as a whole; often come across nests entirely without lining. The location of the nest also varies widely. Most often it is located on a dry place near the water, but also can be as crude shallows of a river or shore of the fin in the grass and at a distance of 100 m from the water, to be completely open, or hidden under a tuft of grass or brushwood. 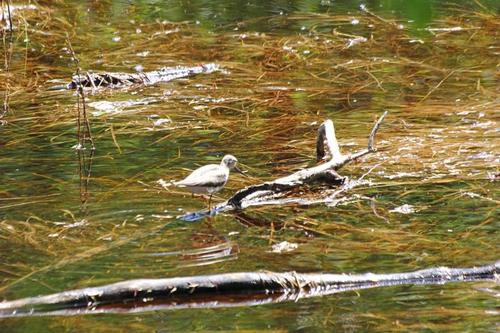 The year is only one brood, but with the loss of the original masonry, the female breeds again. Full clutch contains 4 eggs, rarely 3 or 5 eggs. They have a pear shape and painted in ocher, light brown or grayish in color with a deep grayish-purple and superficial dark brown spots. Size of eggs: (33-43)x(24-29) mm. Hatch, apparently, both birds of the pair (according to others, only the male) 23-24 day, starting with the third or fourth egg. With the appearance of the person at the beginning of incubation before go to nest and hide, towards the end — let on a short distance, after which peep is removed, portraying a wounded bird. The birth of the factory, the 20th of June to 20th of July number. Broods are kept near water, often in difficult marshy places, swamps, wet areas of meadows, thickets of horsetail. 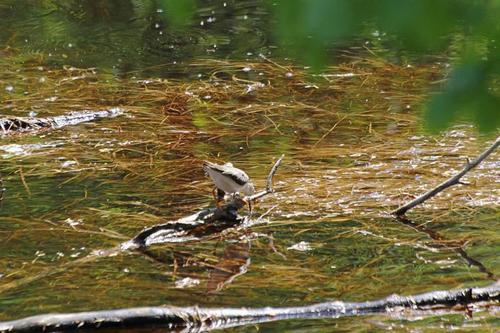 Unlike many other species, the appearance of the person is not hiding, but rather draws attention to itself sitting on some elevated point, like sticking out of the water a fallen tree branch. In some regions of Russia is considered as a rare species, it is included in the regional Red lists of books