Almost everyone heard about this amazing bird. It belongs to the family pelikanova and has several types. Pelicans are common in tropical and temperate zones on almost every continent. 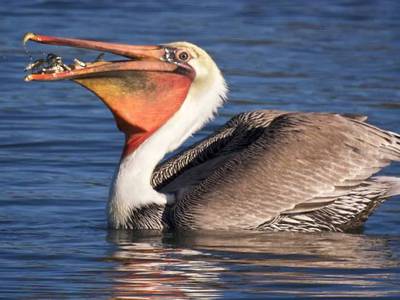 In our country there are two species of these birds: pink and curly Pelican. 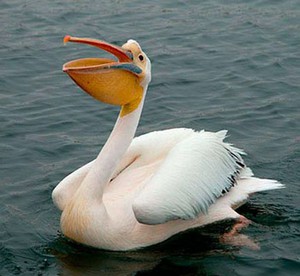 This is a very large migratory bird, its length can reach two meters, and a wingspan up to three meters.

They are the largest among waterfowl, belonging to the order pelecaniformes. Key habitat areas are located on the coast of seas and oceans.

They settle in the trees, building a rather large nest, using for their construction the reeds, of small branches and dry leaves.

All natural species of pelicans, a few different between them, and it depends on the environment. Mostly they have white feathers.

These birds are different from other some features:

The main diet of this food for waterfowl, fish, which it catches in shallow water as it does not know how to dive. Despite the fact that on land, it looks very awkward, Pelican rests perfectly on the surface of the water, as it has under the skin bubble layer.

Lifestyle pelicans and their food 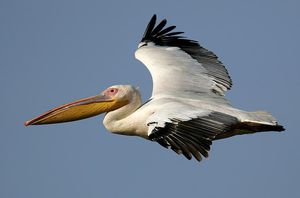 As mentioned above, they mainly live on the banks of large bodies of water, feeding on fish, crabs, and jellyfish. The fish is mainly mined in shallow waters, forcing it there with the help of wings, which they flap along the surface of the water.

Some species prefer to forage together with other birds, seagulls, cormorants, as well as in the community of other pelicans. Leather bag, where they put fish, can be used to collect twigs during the construction of the nest. 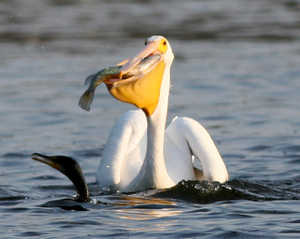 Despite their strange appearance, this is a very peaceful bird. They prefer to live in packs, which can be up to several thousand individuals. As such the leader in the pack is not available, and, living in a big happy pack, they assure their security. Vigilant observers, misleading of the flock of approaching danger, and she’s ready to scare or get rid of culprit peace.

The pelicans are rarely conflicts among themselves, which end fights beaks. Despite the fact that the bird is a bit clumsy on land, in the air, it feels great using when flying the air currents. On long flights especially difficult to have the leader that sets the pace of the flight, so they constantly follow each other. 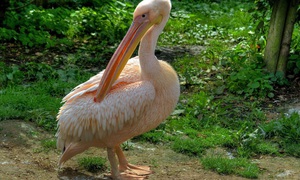 To output offspring pairs are formed only on one season, mostly in a clutch is two or three eggs, which the female incubates for about six weeks.

Building nests is engaged in the female Pelican males are zagotavlivayut material for construction, is that the pelicans build a common nest on a few pairs. 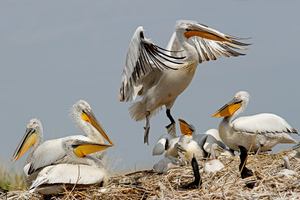 Mortality among the young is very high, as they emerge from the eggs, blind and naked, besides, it still depends on weather conditions, attack by predators, famine and other causes.

Chicks are fed by both parents digested food, which they regurgitate from the stomach into the beak. After two weeks the juveniles begin to fledge, but for two long months, until they rise on the wing, the parents will carefully care for them and nurse. The life expectancy of these birds depends on many factors, but basically it lasts about twenty years.

There are other varieties of pelicans: Australian, Californian and others. 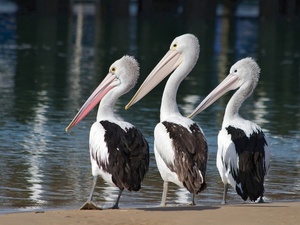 Gradually the population of this beautiful bird is declining, and this is due to the use of pesticides that negatively impact on populations of these birds. Some species listed in the Red book.

In some countries they are trying to breed in captivity, but as with all gregarious birds, they multiply bad, but almost live up to twenty years.

Pelican can be found in tales and legends, his image is used in some countries in heraldry, mythology, and his mention in some religions.