This small elegant bird got its name due to the thin voice. The sounds pika, very similar to squeak. She belongs to the order Passeriformes, family pishevyh. Its dimensions are so small that sometimes a bird is hard to even notice. 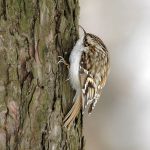 Moves it generally spiral up and down the tree all day looking for bugs, spiders and insect larvae.

She prefer to lead a daily lifestyle. Night pika, as a rule, spend the night with his flock, and by day looking for food everyone in his tree. These kids live about seven years, twice a year, making the laying of eggs in the amount of five or six pieces.

On the European territory you can find two kinds from the family of pikas. This is a common treecreeper and tree-creeper. Outwardly to distinguish them it is difficult, even under close inspection. But these various birds singing, in which these types of and share.

In the Himalayas inhabited by three species of pikas, of which pika Hodgson has long been available in a separate view. Externally these birds differ in some characteristics. So, pika Nepalese are very light, and pika korichnevaya has the dark color of the throat and flanks. The Himalayan species is more colorful. It does not have a uniform color typical for all types.

American and European birds are similar to each other.

Lifestyle this bird prefers sedentary. Pikas rarely roam in packs through the countryside, trying not particularly move long distances. In Russia they can be found wherever trees grow. They are not only in the steppe zone and in the far North.

Eurasian treecreeper is the most common type of family with pikas. She lives in all the forests of the temperate climate ranging from North of Ireland to Japan. These birds are not migratory. Only living in the North can fall to fly to a more southern region. And also pikas living in the mountain forests in the winter, can go down.

The usual diet of these birds consists of:

Habitat common pika is already talking about her eating habits. Living in the woods for the trees, the bird seeks out all day with his sharp beak insects from tree bark. Most often she can be seen on the slopes of rivers and lakes. And in the abandoned gardens and coniferous forests.

Interested in the extraction feed. It leads the entire body with a strong tail and pull insects out of crevices. Unlike the woodpecker, which is waiting for the victim to get out by myself, pika makes it much more efficient and faster.

The favorite food of these birds are the bark beetles. For that pikas can be called healers of the forest. From spring to autumn, these hard-working birds are able to destroy a lot of wood pests.

Finding rich in the insects the tree, the bird will again and again return to it and examine it again from the bottom to the top.

In the winter months, when to get insects is not possible, birds feed on the fruits of coniferous trees or a variety of seeds.

This bird flies a little at small distances, preferring enjoyment in any tree. Despite the fact that the night birds prefer flocks, pika still more inclined to be by themselves. Only with the onset of cold weather these birds can be seen in the group. Interestingly they often join flocks of Tits and sit with them tightly pressed to escape from the frost.

Eurasian treecreeper likes to mark its territory and bravely to protect her from other birds. Surprisingly, the person she is not afraid and, in General, is somewhat besstrashnaya to all animals and birds.

In winter, the pika falls into a state of laziness, but with the onset of spring is again becoming very active. Seeing food on the footpath or the road, she breaks down from the tree and grabs her, but after always returning to the branch.

Very often you can see a little disheveled and mangy tail of this tiny bird. The fact that due to constant use, and the tail, as we know, is by her side, the feathers break and fall out. Therefore, pikas are very frequent molting of the tail.

During the mating period, which starts in March, males become very aggressive and pugnacious. Fight these squeaky birds can be identified by squealing that raise bullies.

In April they build nests in the hollow of a tree favored by a width of about forty centimeters and a depth of thirty. It is noteworthy that nests are sometimes placed very low to the ground.

In order to build a nest, the bird requires up to two weeks time. All responsibilities for the dwelling device to future Chicks lies on the female. Building material, as often happens with birds, are the twigs, moss, lichen, spider webs and your own fluff. Industrious pika enhances its not at the bottom of the hollow, and on the wall. Thus, the socket is not, and hangs in the hollow.

At the end of April, you can see the first egg laying pikas. Males for this period stop. Eggs usually turns out to eight pieces. The usual number is five or six. Their color is white with red small spots.

Sometimes the clutch starts later in June. It depends on the weather conditions in the area inhabited by birds. The eggs are very small and almost without the sharp end.

Chicks on the fifteenth day after the calculations. Moreover, when a large gear a few eggs may be undeveloped. Weak Chicks can trample in the nest in the first hours of life. The male with the female, trying to feed their offspring, constantly flies on the food.

Once the Chicks are a little older, they try to unravel at the tree, still firmly clinging to the bark. The closer parents the pips begin to squeak and open his mouth.

Usually broods from pikas happens twice a year. But as has been said it will depend on the climatein which they live. Young Chicks usually settle near the parents. Starting from the first year of life, Chicks fully fade. This occurs in late summer and lasts until mid-September. A contour feather is replaced first and the fluff later. Moreover, a new pen is usually brighter than the previous one.