The most common species of birdsbelonging to the family opolznevy, this nuthatch common. It is found in many countries of Europe, Japan, China, Korea and Russia. In the Russian Federation different subspecies of nuthatch are common in all parts of the country. The whole area of the habitat from the Atlantic ocean to the Pacific. This species is distinguished by its rapidity. Also, can move vertically, even upside down.

The nuthatch common body length from 10 to 16 inches. At the same time, there is a subspecies of the giant nuthatch. This subspecies is distributed in China and Thailand and can be a length of 20 centimeters. And the wingspan in width from 21 to 28 inches. Nuthatch common weighing approximately 25 grams. The head of this bird is of large size, the body thick, the tail short. A straight-shaped beak, painted in dark grey color. The beak is medium in length and resembles the shape of the beak of a woodpecker. Using its beak, nuthatch common can crack nuts or hard seeds. The color of the feathers depends on the area of residence of this bird.

The nuthatch living in the Northern and Western parts of Europe, the Caucasus, and in the forests of the Western part of Asia neck white. In Northern Europe the abdomen has brown color and the top color of the body gray-blue hue. In the forests in the West of Europe and West Asia in the abdomen nuthatch common red color. In Northern latitudes the habitat of these birds, usually, abdomen white, sides brownish-red, and the tail is brown with white spots. Have the birds found in Eastern China, the trunk bottom is shaded to a light brown shade. 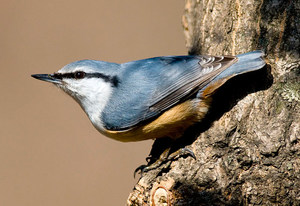 In the far East, the nuthatch, unlike other regions, the white color of the abdomen. And the color of the feathers on the tip of the tail is highlighted with specks of white. Recognizable feature of this bird is the presence of a narrow black strip on the head passing through the beak and neck. Paws with long claws and colored gray-brown color. The male and female have different body sizes. The males look a little more female. Other signs distinguish from each other.

Most often, they choose to live coniferous, deciduous or mixed forests, parks, gardens. Located in the high old trees. From their homes already do not fly. The nuthatch is not an ordinary bird. Exceptions are only some subspecies living in the Northern regions. They are in the season of cold weather, do not stay to spend the winter, and migrate to the southern edges of their habitat. But the most common nuthatches live and spend the winter only in one area. For this reason, they do not consider migrating.

Other birds to their place of residence are not allowed, but do not fly into other people’s possessions. If it is cold, sometimes join flocks of other birds. At the same time, common nuthatches in the pack not going. 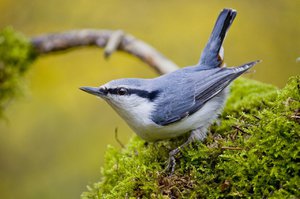 Nuthatches common in the wild can quickly move vertically in either direction by the trunks of trees. They have this capability due to the presence of long and very sharp claws. Often these types of birds settle near places of human habitation. Most of these birds can be easily tamed. They are made to special homes, where they then settle and multiply.

Singing nuthatches are common in different frequency. Despite their small size, they can emit loud sounds, covering a wide range of frequencies. The composition of the sounds of their singing consists of a whistling, bubbling trill, different sounds. During mating season the singing is usually reminiscent of the sounds posylku, however, longer. If the bird is looking for food, it makes a short repeated whistling. For these sounds received the second name in the people “coachman”.

With waves, plays loud sounds that are similar to “TEC” or “TEG”. These sounds with frequent repetitions have a pause. Can also common nuthatch to issue various trills at different frequencies, something like “tiui-tiui-tiui”. The most noisy nuthatch ordinary, published by sounds before the start of the breeding period. This period starts around the end of winter and ends in spring.

The diet of the nuthatch common 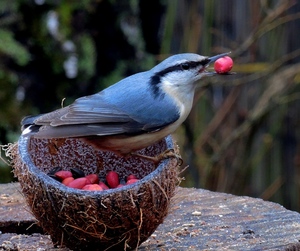 The main menu consists of the following foods:

As eating insects nuthatch common chooses butterflies, beetles, flies, bedbugs, ants, caterpillars, weevils. Using your pointed end of the beak, he pulls them out from various cracks or small holes in the bark of a tree. Some trees common nuthatches can even scrape a bit of bark in search of food. In summer and autumn, engaged in the production of seeds, acorns, fruits, and nuts. The whole warm period of the year to replenish the stocks and hide them in the crevices of the bark of trees, covering the top with moss. If there is no nearby lichen, then uses the pieces of bark. Winter periods are also happy to use feeders that people have prepared for them.

Periods the life of an ordinary nuthatch

The life of this bird can be divided into several stages:

Nesting bird nuthatch in the spring months from about April to June. They can be attributed to monogamous type, because you find yourself once a couple and live life together, caring about each other. As a socket choose a ready-made hollow, often in abandoned woodpecker nest or a natural cavity in a tree trunk. The spot selected for the nest is situated at a height of not less than 3 and not more than 8 meters. The nest entrance is a hole with a diameter of about 4 inches. 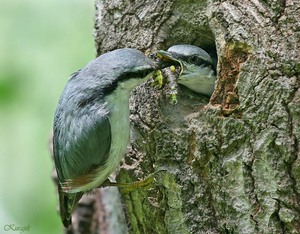 If necessary, nuthatch common reduce entry hole to the nest, using clay. At the bottom laid out the leaves and small pieces of pine bark or birch. If there are no trees nearby, you can use pieces of bark of fruit trees.

In one clutch of eggs is deposited in an average of about 7 pieces. Eggs with a matte shell, and painted white. Also, the eggs are red-brown small spots. The nest is sitting only female. She can leave her future Chicks only if directly her life would be in danger. In the case of a strong need to fly out of the nest, laying eggs covered with litter. The process of incubation lasts 13-15 days. Hatched Chicks are born covered with long down.

Production of food and feeding of the Chicks do male and female together. After the babies were born, they are fed up to 4-5 weeks. 20 days after birth, the Chicks are able to fly. Almost all grown Chicks in late summer, have time to choose their place of residence. But at the same time, the final choice of site for the nest and have a permanent partner the next breeding season.