The Kestrel belongs to the Falcon family, the order of Falconiformes. Lives on the European continent in Western Asia, North Africa. The largest spread is observed in Europe. 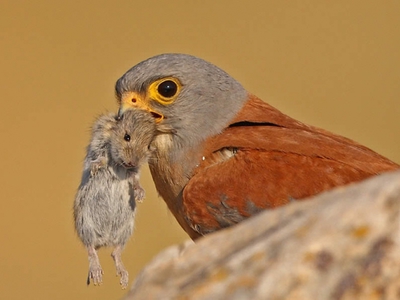 In the wild Kestrel lives 15-16 years, but sometimes life expectancy is 22-24 years. The mortality rate among young birds is 50%.

Kestrel settles in cities with the same ease as the peregrine Falcon. The nests these birds build on the balconies, in pipes, under the eaves, and in other unexpected places. Birds are often encountered on the boulevards and in the parks. On the tracks of the bird could just sit there, watching the traffic. Where the lives of Kestrels, must be food, otherwise the predator looks for another refuge.

Indeed, this bird is small in size:

During the year, the weight of the Falcon is kept constant. Females are the greatest mass reach during egg laying. The weight of the mother directly affects the survival of Chicks. Than a bird more it weighs, the more it is laying, and the Chicks are more resilient.

Upper torso and head of the female has a Buffy-rufous colour, plus are transverse dark bands. The flight feathers are dark brown, in contrast to males. The tail is brown, there is a lot of dark lanes. The tip of the tail as in males, has a broad dark stripe with a white rim. Of young specimens the coloration as females. However, in contrast to females, the young falcons wings shorter and more rounded. All the birds of this species around the eyes has a yellow border. The cere is the same color.

The main diet of the Kestrel include:

Hunting this bird is also on:

Attacks the Falcon, and birds, for example sparrows and nestlings of pigeons. Prey Kestrel kills, hitting with the beak in the head. For hunting, the Kestrel requires a large space in the bushes of the forest food, they will not look.

Adult Falcon in the day it takes 6-8 voles. Technique in hunting common Kestrel uses a variety. The predator can sit at altitude, looking for prey. Noticing such, Falcon immediately attacks her.

To look out for prey bird may image in a fluttering flight at a height of 10-20 m. Making frequent flapping wings, the Falcon is able to hover in one place. This tactic is very successful in the case of places with large concentrations of rodents.

Kestrel perfectly perceives the near UV light, in which well-marked traces of urine of rodents than the predator enjoys. Noticing the prey, a Falcon headlong attacks her. On worms, shrews, frogs and lizards Falcon hunts on the ground. In flight it produces small birds. 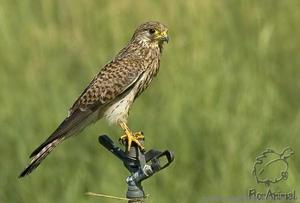 The common Kestrel population in the North and in the center of Eurasia, breeds from April to may. Individuals who prefer the South of Europe and Africa, breeding occurs from August to December. These falcons themselves build their nests not. They make their nests in hollows of trees, rocks, in abandoned nests of other birds. Laying Kestrels were found on the ground, in shallow burrows on artificial objects and structures.

During the laying and rearing of offspring Kestrel in harmony with singing birds, and the masonry of the representatives of different types can be placed next to each other.

Kestrels are prone to colonial nesting. Grounds of these birds, as a rule, not exceed 30 hectares, and the raptors rarely fly them more than 500 m. Sometimes Kestrels form colonies of several dozen pairs.

Their territoriality falcons do not control strictly, and at one site can accommodate several families simultaneously.

The eggs do both parents, and doing this four weeks. The number of eggs varies. As a rule, the nest is 3-6 pieces a minimum of 2 eggs and a maximum of 8 pieces.

The light nestlings of Kestrels appear completely white. Moreover, white not only down, but the claws and beak. Gradually the birds become greyish, a week later blackened nails, and turn gray beak. Little Chicks fledge quickly, and can fly after a month after birth. However, over the next month fledglings remain with parents who teach them to hunt. Mature young birds become in the next breeding season.

The common Kestrel is not on the verge of extinction. There are about two million of these birds. A quarter of this number living on the European continent. This birds will not be able to do falconry, an empty bird will not catch the prey for man. But at the farm the bird may be useful, as hunting for rodents. On the day the predator can catch up to three dozen animals.