Albatrosses are very large and strong birds. One day birds fly up to 1000 km . Home for albatrosses – the boundless ocean surface. They can several weeks without seeing land, spending all my time on the water. Typically, albatrosses live over the waters of the three oceans from Antarctica to the southern shores of Africa, Australia and America. The Albatross is a bird of the Antarctic. Some species only live in the Northern hemisphere of the planet, but many of them have chosen, and the southern part of the Earth.

Length of both species up to 130 cm and weight is 10 kg . The wingspan of the Royal and wandering Albatross comes to 340 cm . As for females, their size does not differ from the size of males. The wings of birds are characterized by their rigidity, have an arcuate shape. The wings are long, but very narrow. There is also thickened streamlined leading edge. The beak is quite large. The tip of the beak is bent, and the edges sharp. The nostrils are on the sides of the beak. Such nostrils provide individuals a very good sense of smell.

To move around in the air, birds use rising air currents reflecting off the ocean surface. Initially, the Albatross climbs, and then expanded plans wings over the surface, gradually decreasing to the surface of the water, simultaneously examining her. Fall birds at the height of 1 meter . At this altitude they can fly 22 meters horizontally. 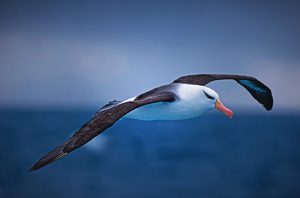 To save energy, the Albatross allows special wing design and planning. That is why birds can stay aloft for hours without flapping wings. When there is calm, albatrosses have to do the flapping wings, but this time they prefer not to fly at all. Always Albatross was considered a bad sign for sailors, as their appearance was talking about the approaching storm.

To relax, albatrosses land on the water or on the masts and decks of ships. Due to the fact that birds have very long wings for take-off they need to run. Prefer albatrosses take off from the cliffs or steep slopes.

Juveniles can be distinguished from adult birds by the color of their plumage. The plumage takes on a different hue, when birds reach sexual maturation, and it occurs within 6-7 years after birth.

Regardless of the kind, whether wandering or Royal Albatross, birds feed mainly on the following food:

In addition, representatives of these birds can eat and the dead inhabitants of the waters, of which there are plenty in the vast seas and oceans.

Albatrosses often settle down in the Wake of ships, accompanying them for a long time, absorbing all the waste that is discharged into the sea or ocean. And if the way the birds come across some floating base for processing of marine products, Albatross ready to fly such ships for months for a few thousand miles. However, this way of life for individuals is commonplace. It’s no wonder the wandering Albatross got its name. These birds are constantly on the move.

Albatrosses believe eternal nomads. They have not only permanent habitats, but they are in constant motion, capturing their flights virtually the entire planet. As mentioned earlier, these birds most of their time on ocean or sea surface far from the coast. Not to see sushi for months is quite normal for these birds. Albatross flying at a speed of 50 km/hour, sometimes the speed can reach 80 km/h. At this speed the birds can fly virtually around the clock. The day the Albatross travels the distance of nearly 1,000 km . Individuals who have been marked with geolocators, circled the entire planet for a month and a half, and some of them did it more than once.

Interesting is the fact that, despite this homeless life, albatrosses are nesting strictly in certain places.

Each species has its own place for nesting:

Each bird always returns strictly to the place where she was born.

Studies show that their nests individuals equip approximately 22 meters from the place where they were born. What an amazing and phenomenal accuracy of topographic memory for individuals who do not see the land for years! 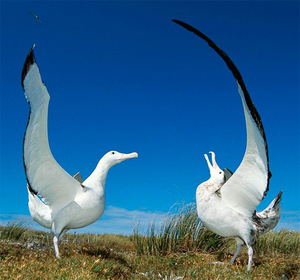 For albatrosses typical monogamous lifestyle. Such birds in all his life find themselves just one pair and remain faithful to his beloved until the end of his days. As mentioned earlier, growing up in individuals occurs at 6-7 years of their lives, so the families they start to attack this age. It happens that the birds are looking for a mate a few years. The process of courting a female is very interesting. When meeting males do a kind of mating dance in front of his companion. This courtship can last for several days.

If the female the male is attracted, they are still some time spend at the place of their acquaintance, and then go to some deserted island and begin to justify your future home, building nests of grass and moss.

The female Albatross lays only one egg, which they hatch in turn. Vary between birds, usually every 2-3 weeks. To hatch an egg for a long time. Chick was born on 75-80 day. For this reason, albatrosses during the breeding lose up to 20% of its mass.

Chick growth is very slow. The first three weeks, the parents feed him every day, and then only once in a few days. Birds care about their offspring for a whole year, until the chick is not strong enough to be able to earn their living independently.

Therefore, the mating period of birds it happens once in 2-3 years. In some cases, even less. However, no matter how much time took a break, every autumn the male flies to the island and waiting for his beloved, which usually arrives a little later. So continues the family life of these unusual birds. If one of them arrives on the island, the second for the rest of his life is one. So strong their Union is.

The life expectancy of the wandering Albatross and other species is approximately 50 years.

It should be noted that the mortality rate of these birds is low. Over the open ocean or sea birds is almost no danger. Danger can arise only during the breeding season when birds are nesting. But it’s very rare. As a rule, the predators do not live on Islands where nesting pairs.

The threat may only come from:

These enemies can attack both on parents and on babies.

In the last century the greatest threat to birds were presented. People ruthlessly slaughtered birds for feathers that were used to decorate ladies ‘ hats. At the present time almost all types of albatrosses are protected under the international Union for the conservation of nature.