Jackdaw — one of the members of the family Raven. It’s a little smaller crows, but has a full addition. Body length is 33-38 cm, weight 137-270 grams, wingspan 64-75 cm, Males larger than females. It is sometimes mistaken for a crow because black color, although the color of the plumage of crows black with a dark grey tint. Beak small, broad, partially covered with firm bristles. The tail slightly rounded and narrow. The legs are black. If the bird is excited, then the head can form a tuft of fluffed feathers. Birds of brilliant wings and blue eyes.

In the sun, their wings shining blue color. Young birds have grayish plumage without sheen. Jackdaw makes a sound like “Kai” or “Kyaw”. The jackdaw can be seen in the groups with rooks, crows, and other birds. Like to nest in pairs, often in stone buildings. Cold birds not afraid of thick and fluffy tail.

Jackdaw attracts people since ancient times. Near the settlement of people, the attraction to beautiful items, sociability and domestication — all of these characteristics are reflected in our culture.

The homeland of this bird — Western Eurasia and North Africa, mostly lives in small towns. Almost all of Europe, Western Asia, Tibet, the Arabian Peninsula is filled with this kind of birds. Natural abode is the sandy cliffs, meadows, fields, rocks. But also, the checkbox can be found on the territory of the Palaearctic region, in the center of Altai. According to estimates by the International Union for conservation of nature daws, there are more than 90 million Close relative of the common Chough is considered the Daurian jackdaw, which is common in East Asia. Looks like a regular Daw.

The character and the lifestyle of birds jackdaws 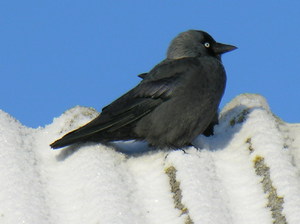 Birds are in search of a roommate in his youth, and the relationship lasts for a very long time, I love to take care of each other. Sometimes you can watch them combing each other’s feathers. Individuals live alone without a pair. In early spring couples the mating season begins. They begin to build their nests and the case jackdaws are very sensitive. Nest in places inaccessible to predators. In the construction of the socket part and the male and female.

As a material used twigs, stems, fasten the construction of manure and earth. 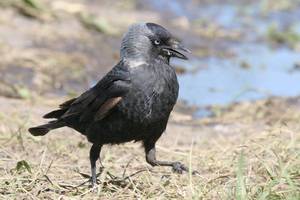 Bird a jackdaw is omnivorous, and its diet is diverse. It feeds mainly on animal food and vegetable. In summer it feeds on beetles, larvae of butterflies and flies, ants, worms, snails and other invertebrates. Produces larger prey: mice, lizards. Feeds on carrion, but much less frequently. From plant foods prefers cultivated plants and various berries. Can eat food waste, often the jackdaw can be seen in garbage dumps.

Typically produces food in an open area on the ground, rarely on trees, digging in the earth and dung. Climbs onto the backs of domestic animals in search of insects — parasites. In the villages, feeding in the gardens, near the roads and garbage cans. If the checkbox settles close to the sea, she may eat a variety of marine gifts. Birds cause severe damage to agriculture, but also benefit from them no less because they eat rodents and insects.

One Comment on “The bird is a jackdaw habitat”