Garden Warbler — small nimble bird, widespread in the temperate forest. It is known for its vocal abilities. Her melodic singing is easy to recognize in the General chorus of bird sounds. Warbler garden is rightly considered to be a young soloist of the forest theater. 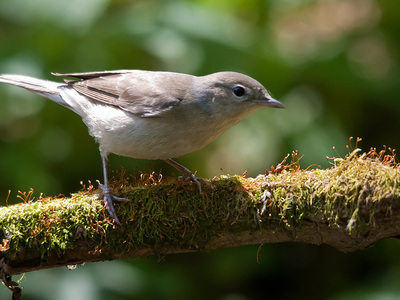 To see a garden Warbler among the branches and leaves is difficult. It has an unassuming appearance, and the color of the feathers almost merges with the bushes. The plumage is greyish-olive color. Abdomen and chest are bright. After the autumn moult the feathers are more vivid. Males and females are virtually identical, have the same body weight of 16-22 g body Length with a tail from 12.5 to 15 cm. Wingspan up to 25 cm.

Unlike other warblers birds:

The location of the birds can be identified by her singing. Warbler belongs to the category of songbirds. She lets out a short melodic trill, resembling the sound of a flute. During the singing, sit in one place, trying not to show his eyes. In case of danger, sharp cries with a loud voice, “chak-chak” or “check it out”.

Birds Warbler singing in a strictly defined period. Singing males starts immediately after returning from wintering and ends with the appearance of Chicks. Especially loud “concerts” young soloist gives during the breeding season. “Performance” most often in the morning, less in the evening. 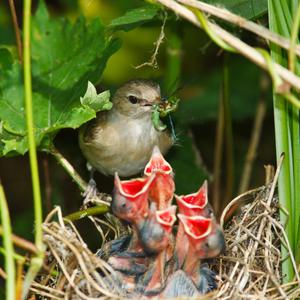 A little bird has many nicknames, which got favorite places of its nesting. The people garden Warbler called the black currant Bush, a big Bush, pokropivny, travnicek. But for the briskness and speed it is sometimes called the “garden hopper”.

The habitat of the Warbler covers a huge area from the British Isles in the West to Baikal in the East, from Finland in the North to Turkey in the South.

For your stay garden Warbler selects sparse light forests, gardens, bushes along the river lowlands. Most of all she likes thickets of wild cherry and alder.

A bird is considered migratory. With the onset of cold weather, leave the places of nesting and rushes South. Flights warblers do at night. Zoologists believe that they are guided by the stars and accurately choose the right direction. Garden warblers winter in subtropical and tropical areas of Africa. Back in the spring in temperate zone. Arrive quite late, closer to the middle of may. And the first to their homes to get the adult birds and the young after them.

Usually warblers-Smorodinka prefer to live alone. The exception is during the breeding season. The form is monogamy. At the beginning of the breeding season, the male collects a bunch of twigs, thereby demonstrating that they are able to build a good nest. These “surges” attract the attention of females. Thus, pairs are formed.

Then select a place to nest. Nests neighbors removed from each other at a distance of 40-150 meters. Area breeding area depends on the terrain and on average is 0, and 1.0 ha.

The nest is constructed over 3-7 days. Materials are thin twigs and roots of plants, dried stalks, moss, spider webs. Birds covertly collect them and bring them to the chosen place. The nest is pretty messy in appearance, shaped like a Cup. The bottom and walls are very thin, delicate. The diameter of the socket 7-14 cm, height of 6-8 cm

The nest is either placed on the ground among the thickets of grass, or at a minimum height of 70 cm, on the branches of shrubs (currant, hawthorn, raspberry). In rare cases, birds warblers nest on high altitudes of 1.5 – 3 meters.

The clutch usually consists of 3 to 6 eggs. Their dimensions: 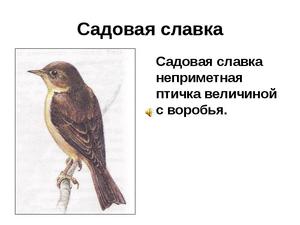 The color of the shell varies in color from grayish to yellowish-white, occasionally with a greenish or reddish tinge. On the main backdrop stand spots of different size brown, dark brown or gray.

In hatching eggs to the same extent and involved the female and the male. The incubation period is 11-13 days. Newborns are very tiny birds, their weight is 1,4–2,3 g. Parents are actively engaged in looking for food for her babies. Feed juveniles small insects. Young quickly acquires feathers and gaining weight.

On 10-12 -th day after birth, the Chicks leave the nest. Parents continue to feed without the kids for about 10 days. Only at the end of this period, the Chicks become fully self-sufficient and earn their living. Sometimes over the summer, a couple of garden warblers manages to bring up two broods.

The duration of the period of incubation and reproduction due to the fact that nests on the ground often attacked by predators, and destruction. Smorodinka can also leave the walls if they are very scared and disturbed. Another reasonfor which birds leave the nest with the eggs, it getting wet during heavy rains.

Nests of warblers cuckoos often use to flip your eggs. When the birds find in your laying alien egg, they leave it. Cases of feeding podkrovelnoj of little cuckoos are very rare. 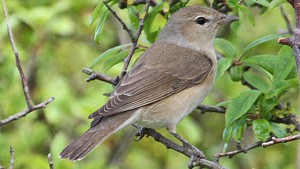 Warblers— Smorodinka is insectivorous birds. They carefully examine the stems and leaves in search of invertebrates and collect their beaks. Flying insects warblers did not catch. Their diet mainly consists of caterpillars, bugs, and shellfish. Autumn menu birds is changing. They go for vegetarian food, love to eat shrubs with berries — elderberries, currants, blueberries, grapes.

The destruction of harmful insects garden Warbler brings great benefit to the forestry and landscape gardening.

Little bird and her offspring represent easy prey for numerous predators. Danger of pogrebenkov and on the ground and in the air. The main losses caused by the attack of predators such as grey Shrike-red-backed Shrike, pied woodpecker, squirrels, Martens, snakes (Viper).

The average life expectancy of garden warblers in the wild is 7-10 years.

Melodious singing of pogrebenkov attracted the attention of lovers of bird trills. Sometimes birds catch and contain the house in a cage. With proper care, Warbler can live in captivity up to 12 years.