In winter on the branches of trees you can often find beautiful little birds with a red plumage on the breast. They are known as bullfinches, which unlike many other birds lead an active lifestyle in the cold season. How do they look? What to eat and where you live? If they fly somewhere for the summer? Details will be given below.

Bullfinches are very visible and appealing, no wonder their photos are widely used to create Christmas cards, calendars and other products for a winter theme.

The size of these birds is very small, they are only a little more than the usual sparrows. Body type this winter feathered strong, but despite this, the weight of it is small — about 35 gr. Calf length is approximately 18 cm, and a wingspan equal to 30 cm.

To distinguish the female from the male here is very simple: 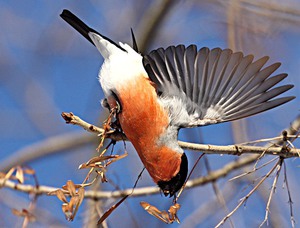 The color of the rest of the plumage in both males and females identical. At the head of a bird there is a so-called black crown, which descends and forms a black chin clearly under the beak.

Back bullfinches painted grey with a slight bluish tint. The wings of these birds have only two colors — black and white, but at the same time, they are very bright, as these colors, alternating stripes.

The bird’s tail short, rounded at the end, always painted black. The feathers under the tail, on the contrary, white. 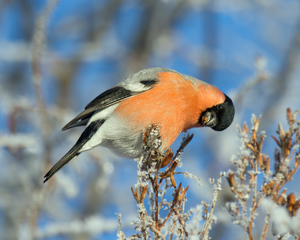 Cheeks, sides and neck of the bird is grey, its intensity varies depending on which subspecies is the bullfinch. As a rule, the plumage of the Chicks is always paler than in adults.

The beak of the bullfinch is small, broad and very strong, black. The birds feet are painted black, they are tenacious, strong, have three toes on each, which, in turn, has sharp claws.

According to this description it is easy to recognize bullfinches among other birds, as well as to see who among them was the female and who is male.

Bullfinches are easy to find on special singing, because they make sounds that are difficult to confuse with the sounds of other birds. The song of the bullfinch is almost reminiscent of ringing metal whoosh (sometimes it resembles the creaking).

Especially sing loudly the birds in the mating season, and what is most interesting here, singing not only males but also females.

The lifestyle and character of the bullfinch 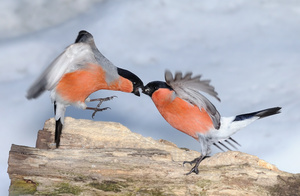 As already mentioned, the Snowbird is a winter bird, and therefore it settles in the respective areas is mixed and coniferous forests. The habitat of these birds is very wide, they can be found in the taiga massif in Europe and Asia from the Atlantic to the Pacific shores. By the way, in Russia they can be found also in forest-steppe.

Sometimes birds can be seen in city parks, but this is the exception rather than the norm. Often these birds arrive in residential areas to find food. For this reason, they often ate from bird feeders on the Windows of houses.

The bullfinch is a resident representative of the feathered family, but as you know, on the eye it only appears in winter. In the summer they will not meet, so many believe that bullfinches fly away to winter in other places. This view is mistaken, as these birds simply fly away deep into the forest and there equip their nests.

What is the bullfinch 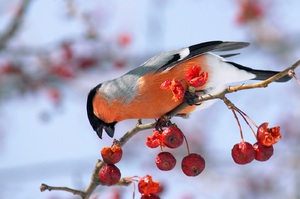 Since it is the winter birds, it is no wonder that their favorite treat is red ash. By the way, Rowan branches bullfinches often depicted on various photographs and paintings. When a flock of these birds sits on a branch of Rowan, it is possible to observe how nobly behave the males: they pass forward females and allow them to choose the largest and most juicy berries.

By the way, if you take a closer look, you can see that the pulp of Rowan berries they don’t eat and only choose the seeds.

In addition to Rowan, these birds also eat the alder, elder, maple, hornbeam, ash, and again, they choose that the seeds of these trees.

In summer, these birds fly to the fields and there find the seeds of sorrel, thistles, pigweed, and other grass field.

Quite sometimes they do not disdain and insectsI. by the Way, it’s agile and nimble by nature, the concept becomes quite clumsy during feeding, which can be dangerous if they fly out of the village to eat from the trough: often these birds fall into the hands of domestic cats, can benefit from the clumsiness of its production.

On the breeding of bullfinches 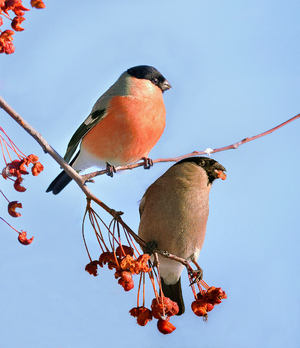 In the mating season the bullfinch melodiously sing, and do it exactly males to subdue females, and they, in turn, respond to them more quiet whistling. By March already formed pair. Interestingly, in the family of bullfinches, the main role is played by a female.

The nests of these birds settle predominantly in coniferous trees at a height of not less than 1.5-2 m away from the trunk. Nest weave themselves thoroughly: the birds with their legs and beak skillfully weave between thin twigs and dry grass. At the bottom of this socket being coated with lichen, dry leaves of trees and even animal dander.

In may the female lays blue eggs with brown speckles (about 4-6 pieces), then incubate them for about 2 weeks. Hatched Chicks are incredibly greedy and constantly demanding food, so their feathered parents without breaks fly for berries and insects.

In the wild, bullfinches live about 15 years, but often they die sooner. This happens due to the unbearable temperatures, and also due to lack of food. 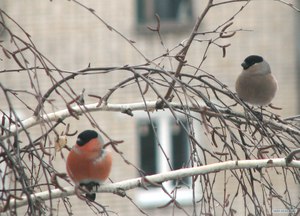 Surprisingly, a bird which used to live in the wild, it can also feel great next to the man if are met the necessary conditions. These calm and steady birds not particularly active in the presence of people, especially females. But if you buy them a tasty treat, they will be very grateful and happy to start eating.

If I got the idea to have such a bird as a pet, then it is worth remembering that high temperatures, it can not tolerate, it is therefore necessary to provide her with comfortable accommodation, where it will be maintained cool air.

I wonder what these birds are quite friendly and with careful handling, they quickly lend themselves to domestication, and can also entertain people with a simple onomatopoeia and whistling memorable tunes.