Grouse belongs to the pheasant family and is a fairly common bird. Often these birds can be seen near the forest edge or in the valley of a fairly large river where they live. The largest number of grouse observed in Russia, it is also possible to meet in the centre of Eurasia, where the steppe. 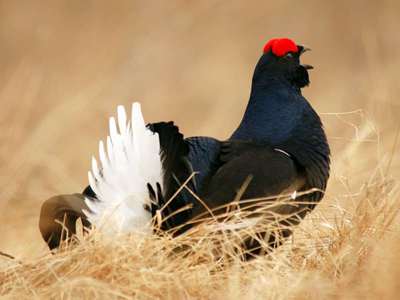 Grouse is very beautiful and quite massive. Head in proportion to their body is very small, and the beak very short.

Dimensions of birds is as follows:

From grouse observed pronounced sexual dimorphism. This means that the anatomical structure of birds the male and female kind is different, not counting the differences in the structure of the genital organs.

Have the following external characteristics:

Feature of grouse is the sonorous voicethat females and males have distinct differences. The sounds of female grouse is similar with chicken clucking and are more severe and rapid than in males. The murmur of the males are long and in case of imminent threats, loud cries turn into deaf and alertness. 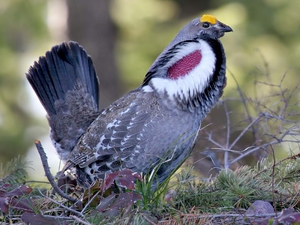 Grouse prefer to spend your time on earth, however, in particularly cold weather the birds have to dwell in the trees. There they get their own food. The manner of take-off and movement is very similar to the movement of the chicken. Grouse run very well, but the steps they have slightly shorter poultry, which used to move more boldly.

Interestingly, even in spite of its rather large weight, the birds quietly and without difficulty move about on the branches of trees, which can be very subtle. Also the dimensions of the grouse did not interfere with its smooth flight, which can be not only fast, but also long. If necessary, they fly a few tens of kilometers, making it without any stops.

To catch grouse is not so easy: the birds ofbladud sensitive hearing and sharp eyesight, and in case of danger immediately fly off to a safe distance or fly to a tall tree.

Activity birds are either early morning during sunrise or in the evening. If the temperature drops very low, the birds seek shelter under the snowwhere they can keep warm. In order not to waste in vain the warmth, blackcock in extreme cold fed only once a day. 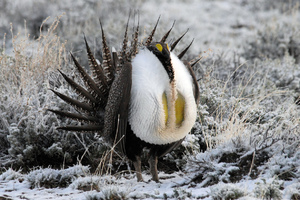 Grouse aren’t used to being alone, so they stay relatively small groups, however, researchers had found, and such groups in which there were more than two hundred individuals. Often, these gof the group consist of females and males in the same ratio, but there are cases when in the pack there are only male or female. But the latter is very rare.

A favorite tree of grouse — birch, because of her kidney are included in the daily diet of poultry. To them they spend most of their day, and after dark and noticeable cooling, the birds are hiding under the snow, where they form special tunnels for a comfortable stay. In a particularly chilly days birds been able to stay in it for twenty-three hours and only get out for a very quick meal.

Surprisingly, the grouse is always on guard and off guard don’t find them. Due to its excellent hearing, they noticed any noises, be it the movement of foxes in the snow or an approaching person. Sensing danger, the birds immediately strikes the walls of the tunnel with his large body and immediately fly into a tall tree.

As has been said, most individuals can be met in forest-steppe parts of Europe and Asia.

Speaking less vague, the habitats of black grouse are the following areas: 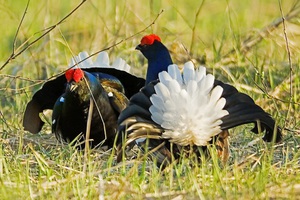 In some locations, black grouse inhabit the forests and steppes, and in more mountainous terrain. This is due to the constant changes in climatic conditions and intensive agricultural activity of man. For example, in the Alpine mountains of birds can be found no lower than the height of a thousand feet, despite the fact that a few decades ago, the land on which they lived was much more.

Unfortunately, the increasing human activity, the fewer birds remain in the developed area. A striking example is the almost complete disappearance of them in the Eastern Sudetes.

Also individuals of black grouse in lesser quantities, but still can be found in the following areas:

Favorite places of black grouse are places that successfully combined both high vegetation and small bushes, and there are areas with a net of trees squares. In the valleys of major rivers and near marshes most often there is a large number of individuals. Avoid birds, black grouse and dense dark forests.

These representatives of the birds can lead two ways of life: as settled and nomadic. For some reason, scientists and naturalists have been moving the majority of the population in certain years. Perhaps this is due to the fact that the number of birds increases considerably, and they can not coexist on the territory of such a huge group. Seasonal travel among black grouse are observed infrequently, and their familiar spots birds leave only in case of special need. 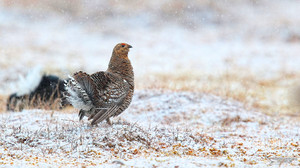 The diet of birds is very diverse, but most of it consists of plant feeds. Certain plants are eaten by grouse at certain times of the year when the need for supplementing certain substances.

Canna, birch, larch, alder — all this is the food of the black grouse in the spring, when there is an acute shortage of protein. Autumn, of course, there comes a time different berries: blueberry, bilberry and cowberry. If a group lives near the field, where there are fruit crops, birds tend to eat there, preferring the wheat other grains.

In the winter, when almost nothing is impossible, the birds have to eat catkins of birch to scrape the soft bark of trees, if possible, there are spruce needles, larch and juniper berries.

Chicks in their diet you want to include more plant foods than an adult. However, with age, their needs for insects and invertebrates much reduced.

Grouse, of course, have many qualities that help them survive in difficult conditions, however, often become victims of various predators, which include wild boars, foxes, hawks and Martens.

The above representatives of the canine sniff of birds hiding under the snow, and instantly attack them, breaking the thin wall of the tunnel. Also hunt foxes with sable on small Chicks. The hawks also stalk their prey from the air and throw lightning at her.

Despite the fact that, according to the study, influence of predators on grouse has increased significantly and provokes some changes in the lives of these birds, it is not the main cause of population decline. This plays a role, and the other two factors, the first of which is a human activity.

Not only the uncontrolled hunting of grouse has a significant impact on their number, but also human activities. The more territories learn people, the more problems arise from grouse and all other animals. People cut down forests, put poles with power lines, from contact with which every year die more than twenty-five thousand birds. Tourism also has a negative impact on nature.

Climate change also contribute to the decline in the population of black grouse. Winter sometimes issued very severe, and sometimes actively warm weather alternates with cold. This leads to the formation of small, but still has a strong influence on the life of grouse, the icy crust on ice.