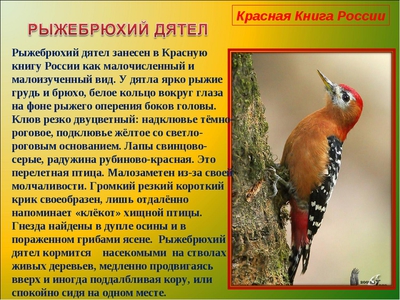 Now take the objective information from the book, which was released in 2001.

Itself the Red book of Russia is divided into 3 sections, they are inscribed:

In Russia, lives and multiplies 1334 bird species and 111 bird species inscribed in the Red book. Many of them live exclusively in nurseries, nature reserves.

Over the last fifty years people have destroyed 1/4 of all known species of birds and 11% of the remaining are on the verge of extinction.

The article describes 10 species of rare and endangered species of birds which are described in the red book. 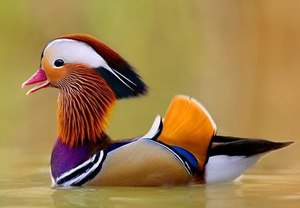 Ducks belong to rare species. They weigh from 400 to 700 g. the length of the wings 21-24 see birds live in the Sakhalin and Amur areas. In the Russian Federation now has 15 thousand pairs of ducks. Males have bright orange plumage. The population lives on a deserted mountain lakes and rivers, as ducks are great swimmers and great hold on the water.

If you compare them with other species of ducks, then dive they absolutely do not like, they only dive when wounded. Rest, preferring to sit on the rocks and the trees. Eating seeds, weeds, acorns. But if this food is little, can eat shellfish, fish ROE. When ducks lay eggs, the Chicks hatch from them in a month.

In Russia ducks dying due to the fact that raccoon dogs, foxes, raccoons destroy their nests. To hunt this species is now prohibited. 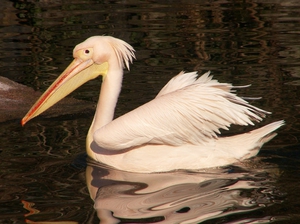 Pelicans live near the Volga river, on the Islands Martinache, Yeysk spit, Tuzla. Birds are related to species that dies out, they are written in the Red book. These birds are beak fish. The body length of the male to 1.85 m, and a wingspan of up to 3.8 m. the Pelicans do not dive, but simply immerse the beak of the water and grab them the fish.

The number of birds is reduced due to the use of pesticides that fall from the ground into the rivers and the sea. And their habitat is shrinking as people draining the reservoirs. Pelicans gather in flocks and hunt together for fish. To breed, arriving as a flock, and then form pairs and reproduce. In 2-3 days the female builds a nest and the male collects grass and passes it to the beak of the female. Juveniles hatch from eggs on day 26. They grow plumage at 70 days after birth. 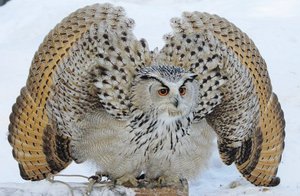 It is the largest bird of the owl family. Their wingspan of up to 1.9 m. They have massive body length of 60-75 cm, feathers are mostly red colors and shades of ochre, orange eyes, and above them “eyebrows” of long feathers. The female’s weight is 3-3. 2 kg, and males between 2.1—2.7 kg. Is predators, sleeping dayand night hunting for mice and other rodents, snails, small birds. Each owl has a certain area where hunting.

Hunters use owls to catch hares, partridges. However, owls can be dangerous for people. Owls fly very fast, right after take off, they can fly at full speed. In Russia the number of birds is gradually decreasing.

Swans live only in Russia. Have a wingspan of 1.95 m. they Have a body length of 1.15—1.27 m, they weigh 4-8 kg. swans Have white feathers and black beak. Eat grass, berries, potatoes, sometimes catch small size fish. When the swans will be 3 years, then they find a mate, which mate for life. The nesting swans on a small, dry hills, and sometimes the nests remaining from the previous pair, being used by another couple.

The young hatch from eggs in a month and then the swans lead them to the pond. And begin to fly the Chicks in 45 days.

Currently in the Russian Federation, trying to restore the number of birds. They also brought in the Red book. 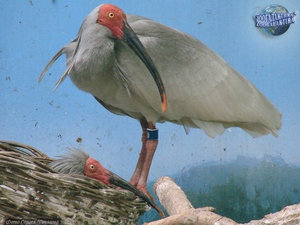 The bird has a white with pale pink feathering, legs brownish-red, around the eyes the bird has a red tint. The bill is black, and on her head flowing on her neck crest. IBIS settles in the far Eastern area. Japan declared the bird extinct. In Russia, watched a pair of ibises in 1990. It is unclear whether there are birds in the Russian Federation now. The voice resembles the cawing of crows.

Ibises inhabit the nearby marshy rivers, they catch fish and reptiles. When IBIS reaches the age of 2, they pick a couple with whom I live all my life. After the female lays eggs, they are incubated alternately by both parents. After 28 days the eggs hatch the young. IBIS are also listed in the International Red book.

Birds considered endangered species worldwide. In Russia the bird seen in the South of Primorsky Krai near the village of Hassan, but perhaps it has now disappeared in Russia. The cause of extinction is not a suitable environment in the places of building nests, for example, the burning of dry grass. Body length of males 15,3—16,4 see the Wing in males of 7.2—7.8 cm, females 6,8—7,2 cm

Buntings flit from place to place, gathering in flocks and together, hunting for insects. Inhabit steppes, build nests on the branches of trees and on the ground. Their nests are made of grass. Females lay 4-5 eggs and hatch them. When the Chicks appear, their nurses male. In one year, you may receive two generations of nestlings.

Oatmeal have the same size as ordinary sparrows. At the top of the oatmeal body brownish, paler below and on the chest — stain brown. 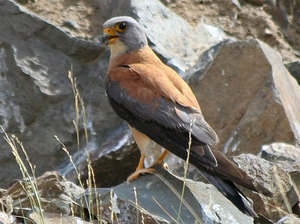 Kestrels dwell in the South-West of Russia and southern Siberia. They are predators, catching insects, is that they eat Scorpions. Kestrels get in packs and hunt in the desert. Sometimes it happens that in the spring of the Kestrel caught a small rodent. Birds that 1-2 years, select a mate, breed, and next season they have other partners.

Body length Kestrels 29-33 cm, a wingspan of 58-75 cm, weight 90-180 males g and females 135-210 g. bird Nest doing in the depths of the rocks on the hills. The female to create a nest digs a hole in the ground. The eggs hatch the babies of 28 days. Parents begin to feed Chicks, and after 28 days, the young leaving the nest. In recent years, the number of Kestrels has decreased dramatically since they eat insects, and in agriculture it is customary to use pesticides to eliminate insects. I think that birds are under threat of extinction. 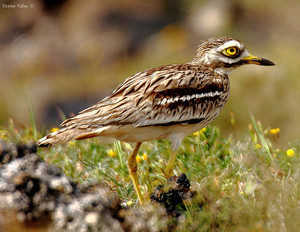 This bird has huge expressive eyes and long legs. Body length up to 45 cm, and the wingspan— 80 cm Flying avdotka very rarely, only if she is in danger. Most of the time the bird goes on his long legs. Day avdotka resting, lying in the shade, and night hunting for mice, snails, lizards, frogs. In April, the female builds the ground nest and lays 2-3 eggs.

Avdotka lives in deserts and steppes. Near Volga river and in the foothills of the Altai. In the upper part of the body in her grayish-red, the feathers having brownish-black stripes, and the bottom body cream. Tail and flight feathers are the feathers completely blue-black. Birds gather in a flock and prefer to live alone.

The eagles are rarely seen outside of the Russian Federation, only when they arrive to spend the winter. In Russia, they live on the Kamchatka Peninsula and the sea of Okhotsk. It is the largest and heaviest of the species of the subfamily eagle. Eagle can weigh 9 kg. Eagle is so named due to the fact that he’s a white middle coverts of the wings. These predators catch larger fish, I love salmon. In addition, the eagles could catch rabbits, foxes, seals, and sometimes carrion. Live off the coast near the sea, and build nests in the tops of trees.

Eagles very careful hard to make contact with the person. Because of this bad to understand how these predators to multiply. 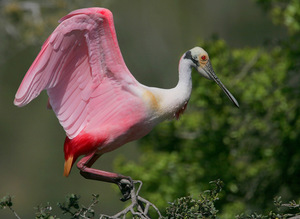 Spoonbill has white plumage and a widening at the end of the beak, similar to sugar tongs. Spoonbills have legs slightly shorter than in herons. In color the legs and beak black spoonbills. Body length up to 1 m, its mass is 1.2—2 kg Wingspan 1.15—1.35 m

At the moment there are 60 pairs of birds. The species is dying out due to the fact that after hatching from eggs in 1 year die 60-70% of cubs, and even birds begin to breed when they turn 6 years and 5 months, and they live 10-12 years.

Spoonbills lived on the shores of freshwater rivers and lakes, feeding on fish, insects and frogs. Now they basically exist only in the reserves.

In the far East there are a large number of rare species due to the fact that there is a many nature reserves. Now all the species of birds listed in the Red book, are protected by the state.