Man is always interested in the wild world of nature. Attracted by their mysterious and dangerous inhabitants, its unexplored mysteries, fascinating nature. Predators pose a particular threat to mankind. These animals and birds do not give time to think, they act quickly and decisively. It happens that a seemingly harmless bird and not able to bring harm, but should not be so trusting to treat this.

Recently the arena of world literature broke all of us have the famous American writer Rance Riggs with his novel “the House of strange children.” Based on the novel by Riggs shot a movie with Director Tim Burton. Starring small children with incredible force with her teacher Miss Peregrine Falcon. The teacher could at any time turn into a bird the peregrine Falcon. Today we will talk about this fascinating bird.

Brief characteristics of the Peregrine Falcon

Peregrine Falcon belongs to the family of falconwing and is considered a bird of prey.

The close relationship of the birds is:

Its spread has in the world except chilling North of Antarctica. This bird is one of the first places on the speed of flight. Scientists have proved that the peregrine Falcon can accelerate your speed when flying up to 350 kilometers per hour. This speed can not catch up with the speed of other birds. 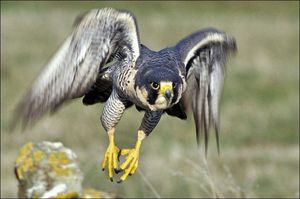 This is a quite large bird, the length can reach up to 55 cm and have a wingspan of 85 to 125 cm the Female of the peregrine Falcon weighs about 1 to 1.5 kg when the males weigh about 500 grams. So we can conclude that females are much larger than their males. It’s probably the only difference by their appearance the females from the male.

Has a pretty strong body, the broad massive chest is characteristic for the birds from the Falcon family. The muscles hard and visible. Well-developed bent legs with strong claws and a sharp powerful beak. Colors females and males do not differ. The top birds have a grey, sometimes with white stripes, including the wings, except for the tips and the parts above the tail. The ends of the wing are black.

Light abdomen, with a variety of shades. The breast streaks are teardrop shaped. The tail is medium in size, rounded. The lower side of the tail is black and may be white stripe. The head is gray, and the neck white or light. The eyes are large and black. Massive massive beak and nails painted black. Its prey the bird is striking with beak and talons, the beak the teeth help her in the hunt. Young peregrine falcons are not as contrasting in color as adults.

To communicate or attract attention use your loud voice. The voice coarsens, if the bird is disturbed about something.

The habitat of the Peregrine Falcon

Its spread has in the world except chilling North of Antarctica. This bird can easily get along in any environment. For peregrine falcons will not be interference nor frost -30, heat +30. With the exception of polar regions and high mountain areas, it can be seen anywhere, even on the Islands.

This bird is the most widespread predator in the world due to their habitat. Lives mainly in places uncommon for people. Most of all loves spending time near the water, near the rocky cliffs. The usual place that they could build their nest is near rivers and bodies of water. The most common locations for nests of cliffs or tall trees. Chooses a place with a vast visibility, which is water, and trees.

In the United States took the opportunity that the peregrine Falcon settled on the roof of a skyscraper with a height of 55 floors, and set – shooting for observation and study. 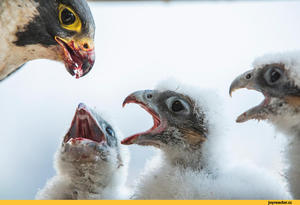 In the first year of life, the peregrine Falcon occurs puberty, but begin to reproduce after a year or two. If this bird finds a mate, they remain faithful to each other for many years. Also this bird is tied to their habitat and to their nest. The nest can be transmitted from generation to generation and so for many years and even centuries. Researchers have reported case on the island bred these birds in 1267.

Around since April it begins the breeding season,and ends in late June. In the Northern hemisphere, spring comes late and the reproduction is postponed to a later period. Male looking for a nest that will become future home. And after that fanciful flourishes beckons to his mates. From couples like this parody typical honeymoon. Half can care for each other to clean the feathers, feed each other. As the peregrine falcons, by their nature, are ring-fenced geographically, the location between the terminals is not less than 1 meter.

These birds are very sensitive to their housing, and therefore can not control himself at the sight of a stranger in their territory without seeing that the enemy is larger in size. When a person a feeling of anxiety that apart with a loud cry.

It happens that peregrine falcons occupy the nests of their ancestors. As bedding in the nest is nothing, only if there is some feathers or bones. As a predator near the nest can be scattered bone from the extraction.

Once a year the female lays eggs in late spring in an amount of from 3 to 5 pieces. Colour of eggs are brown-red. The average size of eggs from 5 to 6 cm incubation Period of approximately 1 month. Dad is also involved and sometimes substitute for a mate. The first time, when birds are born, the female need to heat and feed the birds. The second parent at this time flies to hunt within 25 km in search of food for his family. When the birds performed a month and a half, they can make their first flight.

Prey for the peregrine Falcon

The diet consists mainly of birds of medium and small sizes:

Lunch varies from birds. Adult male on the hunt, you need to think not only about themselves but also about their mate and their children. As long as mom stays with the baby birds in the nest, dad gets the role of a breadwinner.

Also for dinner can catch:

At this point in time there are about three thousand pairs. Some times the number has begun to decline. This bird has the second category in the “red book of Russia” .