One of the largest and most interesting migratory birds are cranes (from lat. grus grus). The common crane is the bird, whose clang we hear in the spring during their flight to the warm countries such as Africa, India, Iran, Iraq. This is the bird that sing in the songs and which is the main character of many fairy tales.

There are several species of these birds, but the most common and numerous — ordinary cranes. Consider their way of life, peculiarities of reproduction, interesting facts and more.

Males and females do not differ from each other in their appearance. The color of adult birds is grey. Only some parts of the feathers are painted in white and black color. The top of his head feathers are missing. A distinctive feature of this species is the presence of red caps on their heads. Incidentally, it is for the red caps this species is distinguished from other types.

The main features of appearance:

Breeding of cranes and development of Chicks

The breeding season of cranes starts from April to July. A couple have, as a rule, formed even before the flight to the nesting and wintering. On arrival, these proud birds with a crane dances, which represent jumping, wing flapping and important galloping gait. Dancing in courtship birds have a starring role that actually affects their reproduction and abundance.

A place to nest the cranes choose the water. Often nest far from it in dense thickets. Male and female notify each other about the proper place where the safe will display the new offspring, drawling voice. The same sound they report their pair of the impending danger of a different sort. Thus defend their territory.

The bird begins to lay eggs in may. Eggs can be several. From one to three. The male and female incubate in turn. The period of incubation lasts 31 days. And only after this time, the light appears a new offspring.

Chicks tied both parents who are equally well involved in their care. The first days the small cranes do not add much weight. Then begins the intensive feeding and only after some time they gain weight.

Immediately after birth, the Chicks are completely covered with fluff. The feathers on the wings and on the body grow by the third month of life.

When young cranes are fully stronger, parents have withdrawn them from their nest in the reeds and thickets. Once Chicks become capable of flight and are starting to climb into the sky, the parents fly with them in search of food in the grain fields and meadows. To rest the birds after feeding back into the reeds.

In early July, the Chicks begin to fly on their own. By the end of the month their parents returned to a nomadic way of life. The approach of autumn the cranes gather in flocks and are preparing to fly to warmer climes. The family life for the chickens ends. Now they live an independent life. 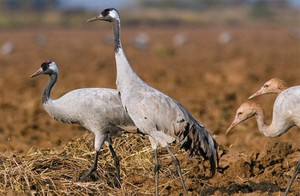 The main feature of the lifestyle of common cranes is that they are looking for their love once and for life. Disintegrate such pairs are extremely rare. Sometimes it so happens that the female or the male dies. Only in this case, the remaining bird finds another partner. Another may form another pair of unsuccessful attempts to breed.

Crane, as mentioned above, upon returning home, calling a female mating dances, extraordinary begins to shake a leg in the pack. To this we must add that such mating dance they can even arrange all alone. At this time they are very careful. Therefore, to observe such a wonder can only be from afar. The nesting birds are not satisfied with gregarious clusters, each pair of cranes nests far away from each other.

These heroes of many fairy tales build nests from a variety of materials, but most of brushwood. Building very quickly and carelessly. Each such socket is, in fact, a bunch of twigs collected nearby. Inside the nest is a tray, lined with dry grass.

The old birds take their old, long-built and a nest in which they live for several years. Every year birds renew their.

Crane’s nest is very large. The diameter is one meter. They need a big place, after all, in the nests of smaller size are big birds just won’t fit.

What to eat cranes

In the autumn these birds are feeding in the fields. They are not particularly picky eaters. Eat mostly cereal grain, but the main treat for them is peas. Food gray cranes in different months is different. In summer it feeds on frogs, small insects. In captivity cranes feed on bread, bread with grains and minced meat.

As for power cranes, it is necessary also to notice, is very important for them water. Even more important than solid food. They drink a lot. If there is no water, birds fly over it many times a day.

If cranes are living in conditions of captive maintenance, they are fed, as a rule, a full and varied food. In nurseries, the main power source of cranes is the feed for the chickens. In addition, birds eat live food, fish, cottage cheese, mixed with sprouted grain, carrots and vitamin supplements.

The number and distribution 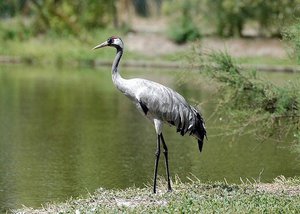 The majority of cranes are nesting in Russia and Scandinavia. Today there are about 250 thousand of these birds. However, their number has been steadily declining because of the construction of various facilities, drying wetlands, agricultural expansion and so on. In addition, the cranes are dying from the pesticides that farmers used for crop protection. The poaching of these birds if shooting in a small quantity. Because this fact does not affect the drawdown.

Cranes listed in the Red book and are under the protection of States from many countries. They are protected by the laws on migratory migratory and floating birds. Shoot and catch cranes is prohibited by law. However, despite protection and despite the fact that the cranes listed in the Red book, the number of these birds from year to year is declining.

In Russia there are two common cranes — Western and Eastern. They are almost indistinguishable from each other. The border of the distribution and independence of the species are not fully understood. It is known that the boundary separating these two subspecies, passes through the Ural mountains. Western subspecies of cranes lives in European Russia, and East Asian. In the winter the crane from the European part of the country flies in Africa. And from the East to the North of India or in China. A small proportion of birds remain to winter in the Caucasus. 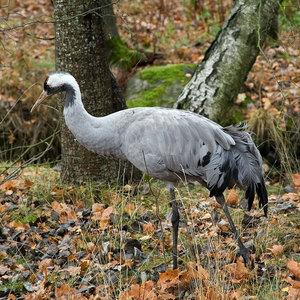 The most interesting fact from the life of crane birds grus grus is that they coat their feathers with silt or mud during the period of incubation and care of Chicks. This allows them to camouflage and hide from many predators.

Interestingly, as the crane flies. He, like many other birds, begin their takeoff from a smooth run-up to the wind, accelerating all. Opens the wings of the crane before the takeoff.

Cranes appeared a long time ago. Even in the time of dinosaurs (about 40-60 million years ago). And even then they were highly revered. This is reflected in the fact that the Pithecanthropus — the first people painted these birds on the rocks. This is evidenced by the fact that on different continents, scientists and travelers were met by the rock carvings depicting cranes.

The little Demoiselle, the largest Australian and Indian, the hardest Japanese. In Armenia, the crane is a symbol of the country. The lifespan of the cranes for about 20 years in the wild, in captivity birds live much longer, about 80 years, which among birds is extremely rare.