Many birds are permanent inhabitants of cities. Usually only the person is not able to determine the plumage, and especially by voice, what kind is it, is it just the usual pigeons, crows, jackdaws and sparrows. 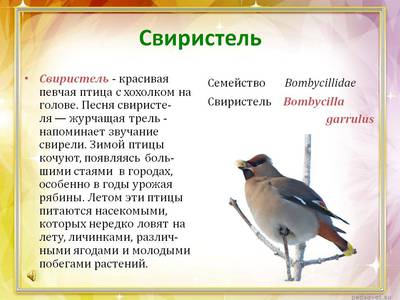 What can be said of modern urban man about the nature of his native land, if he sees this nature only on the weekends in a city Park?

With the onset of the cold time of the year, even in city parks you can often find birds with tufts on the head.

There are several varieties of crested birds:

Among the usual sparrows, jackdaws and other birds flocks of waxwings are allocated. They have plumage with silky luster and a crest on the head. Belong to the passerine.They usually stay in flocks and nest in colonies. 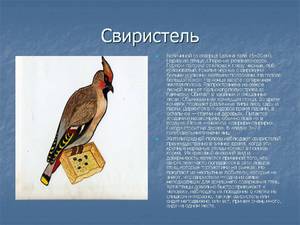 The size of the bird reaches 20 cm, the Plumage has a gray-pink color. On the neck – black spot near the eye – the black arrow, the tail is black. The beak is short with a small denticle.

Earlier this feathered lady thought were beautiful, but not able to sing. The name comes from the old Russian language and means “to whistle, to shout”. The second version of the interpretation of the name probably originated from sounds, like the sound of the flute. In the mating season Corydalis emit sonorous trills and sounds “suiriri-suiriri “.

Only this family consists of 8 species and 3 subfamilies. Despite the low species, waxwings are poorly known, much of their behavior remains a mystery. All varieties have similar features and differ from each other small signs, stands apart black the Waxwing and a gray female. Other types have almost no big differences between female and male.

The Waxwing black – the holder of a long tail, unlike the colored relatives, and red eyes. Its habitat is restricted to forests of Mexico and southwest USA.

Mostly birds live in coniferous and mixed forests of the Northern regions of the Eurasian and Severoamerikanskih continents. In Russia the bird the Waxwing is found in the taiga and forest-tundra. This nomadic family is not migratory, but often in search of food birds leave their usual place of residence and moving South.

Where food is rich and varied bird finds temporary residence, then they move on. In our country they can fly to the Caucasus and the Crimea.

With the onset of spring and the warming of a flock of birds seeking back North. More information about these amazing birds ornithologists draw it is during such flights, as in those places where birds gresults, they are secretive and sedentary.

During the flight, the Waxwing becomes movable. Most of the day they are busy finding food, for this gather in small flocks, with a population of up to 30 individuals. In flight birds beautiful. They fly through curves.

The mysteries of behavior

In winter, the city of waxwings sometimes afraid of people pretty close. Very attention grabbing chirping, singing and whistling. They do not refuse treatsthat person puts in the feeders, arranged in the green areas, gardens and even courtyards.

In nature for waxwings hunted by the predators:

For them, prey are eggs, Chicks and sometimes adults.

The main food of waxwings and berries, and the fruitsand the buds of trees and insects. The animal feed include: 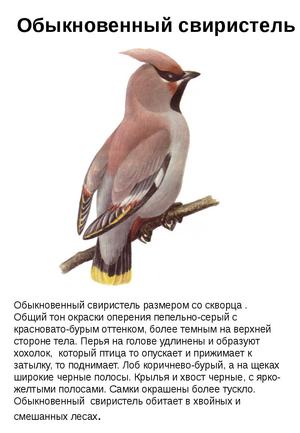 With the onset of cold weather, the birds begin a nomadic life not because of the cold weather, and due to the lack of food and hunger. Migrant flocks stop in the area where a lot of berries. This is Rowan, guelder rose, dog rose, juniper, barberry. Choice cranberries, hawthorn, mulberry.

Agile birds often hang upside down, pulling the berries from the trees, showing the wonders of acrobatics. A very good treat are the fruits of the mistletoe, so waxwings are sometimes called omoluabi.

It was also noted that sometimes the food got fermented berries, it had a negative impact on the state of the birds: they became like a drunken. In this state, the waxwings were sometimes lost orientation in space and couldn’t even fly. This disaster overtook some individuals, and they were down to the obstacles with imminent death. Sometimes people do not understand, when the birds started to beat in the Windows and walls. This madness was considered a bad omen. This phenomenon is due to the factthat the waxwings ate fermented berries or maple SAP.

To find out who feasts on berry bushes can on the balance. Thrush or bullfinch pecking the berries evenly over the entire branch. The Waxwing takes away everything, like locusts.

Not all food is digested, the seeds of some plants pass through the intestines are allocated, spreading elsewhere. This is the benefit of these birds. During the rearing of pups waxwings destroy harmful insects. And the adult birds eating berries, help to reproduce plants. Because of this, plants can be transported even over long distances.

Arrive crested feathered friends is impossible to predict. Their movement depends on the weather and harvest of berries in the area. The arrival of a beautiful noisy flocks is surprise and very happy especially children.

Nesting waxwings satisfied, returning to their native habitats, after its nomadic. The mating season birds begin before departure. During courtship the male ruffling his crest and fluffs tail, trying to seem larger. Pairs that were formed, wander together. About may they begin to build a nest. Meet the birds at this time is almost impossible, rarely it fails to do so as the bird family be careful and hidden from the human eye. This is done in order to preserve the progeny and procreation.

Nests usually are built in woodlands on the banks of small ponds, often chosen high ate, that the house could be build at a height of about 10 meters and hide it in the tree, firmly attached to the branches. For the construction of the nest are chosen thin twigs, feathers, pine needles, pieces of moss, grass stems. Sometimes the bird in such buildings even met the fur of the deer.

Nests are spherical in shape, sometimes like a big bowl. One female can hatch four to six eggs of a gray-purple color with speckles. It takes about two weeks. At this time the male takes care of her friend brings food.

After the Chicks were born, the couple brings up their children together. Young birds are fed larvae and insects, then gradually transferred to vegetable food.

In order for the chick learned to move and get their food takes 2-3 weeks. As they grow older babies together with parents go to roam. Sexual maturity in birds is reached at one year. After a year formed a new pair. The approximate life expectancy of waxwings in nature — from ten to thirteen years.

Delightful plumage has always attracted people. Amateur birders try to tame these amazing birds. They live in captivity, and quite unpretentious. Birds get used to people, but this existence makes the birds sluggish due to a sedentary lifestyle. Upholstered locked up, they almost don’t sing, and just create a separate whistles. It is better to keep waxwings in cages in small flocks. In such conditions they are more active, and bring more fun and joy.