The first impression when meeting with a hoopoe — a mixture of beautiful and funny.Despite the relatively small size, hoopoes quite voracious. The food they produce beak. Pre-pick out the prey from the bark of a tree or from the ground, sharp blows of the beak kill it, throw it up, catch and swallow.

The appearance of the hoopoe

The main external characteristics of birds, of the hoopoe are:

Externally and females and males do not differ from each other. Juveniles have less color saturated. They have a short crest and beak.

Habitat and behavior of birds

Hoopoe relates to migratory birds. In summer it lives mostly in North Africa and in Europe. In autumn these birds fly to winter in the tropical zone. Most often they migrate to India and Equatorial Africa, but sometimes the whole year living in North-East Africa and in China.

Bird migration takes place at night. The duration of its much delayed from mid-July to early November.

Hoopoes are usually outdoors and spend time on earth, choosing such habitats as:

So birds could easily feed on the earth need the presence of vegetation. Must also present a vertical surface. Hoopoes build nests on trees, walls, cliffs, haystacks.

These birds are quite weak wings, however, they are capable of long continuous flights, which proves their habit to wander. Flight of the hoopoe flying, not fast, but quite maneuverable. Therefore, raptors are rarely able to catch the hoopoe in the air.

On the ground these “sympathy” move nimbly and quickly. In case of sudden alarm, when the hoopoe could not escape, he pressed to the ground, swept tail and wings and his beak up.

In the period of hatching Chicks and feeding the adult birds and the babies produced an oily liquid with a very pungent odor. It is secreted from the oil gland, as a kind of protection from land-based medium-sized predators.

As appearance, vocal hoopoe also special. The bird has a dull, slightly guttural voice and patissony Creek “UD -UD -UD” or “OOP — OOP-OOP” repeated several times in a row. Between the series of sounds the interval does not exceed 5C. In cases of fright or surprise, the bird gives a shrill cry of “Chi-er”, which resembles the cry of the turtledove. During mating and caring for offspring, these birds emit a booming sound. 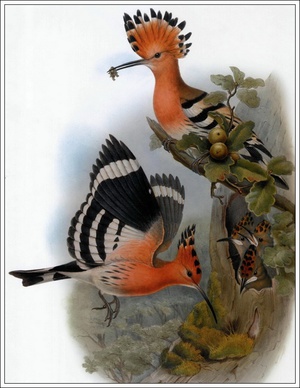 Hoopoe reaches sexual maturity at one year of age. These birds are monogamous. In Russia to their breeding grounds, they arrive when there are the first thaw in March and April. On arrival the males are very active, taking territory for breeding. They loudly shout and beckon the females. Often the same territory hoopoes use for several years.

Multiply hoopoes, as a rule, in separate pairs. Often males living in the neighborhood, put up a fight on the border areas, reminiscent of cockfighting.

The birds arrange nest in a secluded place. It may be a hollow tree, deepening on the slope of a cliff or a rocky cleft. In the absence of suitable shelter, hoopoes can lay eggs on the ground, among the dried remains of the animal.

The lining in the nest can contain only a few blades of grass, dung and feathers or no. Unlike most bird species, the hoopoe is not removed from the nest litter, which gradually accumulates.

The breeding progeny occurs most commonly once a year, but if birds are sedentary, cycles can be repeated up to three times. The clutch of 5-9 eggs is oblong in size with a weight of about 4.4 g. the Color varies from gray-white to dark brown, sometimes may have a greenish or bluish tint. Daily bird lays one egg, incubation starting with the first and continuing for 25-32 days. At a time when the female sits on the nest, the male brings food.

The Chicks are born completely blind. They are covered with reddish thin down, which changes a few days to pinkish-white, becoming more dense. Feed the kids by both parents. They in turn bring them worms and insect larvae. At the end of June the Chicks at the age of 20 to 27 days leave the nest. They begin to fly, but a few weeks stay with his parents.

The average period of life of the hoopoe — about eight years. This bird is quite ancient. Mention of it is in the Bible and the Koran.

The main food of the hoopoe are:

These birds feed on the surface of the earth on bare ground or in low grass. They often poking its long nose in the dung, in rotten wood and in piles of garbage. It is for this reason the hoopoe is often accompanied by grazing cattle. Everything else some species additionally eat fruit and drink flower nectar.