In the forest every year, settles a colony of blackbirds. Live there the thrushes, the Redwing (Turdus iliacus) and thrushes-fieldfares (Turdus pilaris). In summer and autumn they will make devastating raids on the surrounding gardens, and now equip nests, laying eggs and hatching. It’s pretty noisy and scandalous birds: any potential enemy who enters their territory, they trying to get rid of the whole flock: a loud screech, a flapping of wings, and if all these methods do not help, then the sighting and firing of droppings. You can often see them thus chased away the crows.

Anyone passing along the path of the person also causes great panic. But I’m a reasonable man, and such behavior of birds, on the contrary, unmasks their nests. Kind of just go along the trees, in one place screams dramatically increase, I look around — and here it is a nest! As if not specifically looked for, have slipped. The fieldfares nest high in the forks of trees, on thick branches made of grass and fastened on top of the mud, and the Redwings build nests low, no higher than a meter, in old stumps or polupoltinnik branches, if not on earth.

Pass, takes off from the nest, one parent swears in drozdina from the middle branches, and I can’t hold the curiosity, look for a second nest. Here they are, 5 neat testicles, the size of a little smaller quail. And not “blue, Robin’s egg, “as the song says. The color of the eggs is greenish-blue with gray-brown speckles.

And after a week in these same nests are only just hatched Chicks, still rosy, naked, with a huge closed eyes. And only along the back as some small dinosaurs, with a mane of white fluff. They’re just sometimes change the position and positivelt, but soon it will begin to actively open the beak and squeak, demanding food from parents. 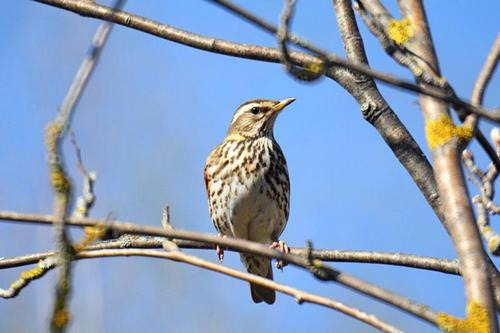 In the photo , the thrush, the Redwing (Turdus iliacus). The smallest and one of the most common on the territory of former USSR members of the genus thrush. Length 22 cm, weight rarely exceeds 60 g. the Color is brownish-green (olive-brown) on the back and bright with a dark (olive-brown) spots on the bottom. The flanks of the breast and the underwing coverts are rusty-red. Above the eyes is a whitish-yellow eyebrow; hence the Russian name of this bird. The female looks paler than the male. 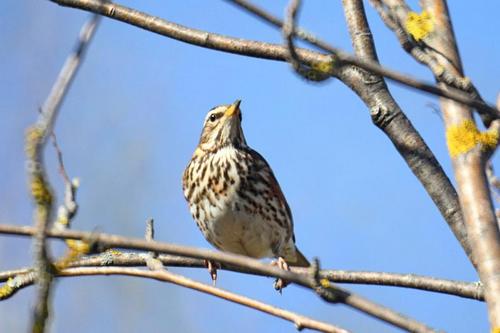 The Redwing is a bird, not afraid of cold. This kind of thrush before it arrives and later departs from the breeding area. A total of Redwing remains in these locations for about six months. The beginning of the arrival of birds depends on weather conditions and can vary from one to three weeks. As a rule, mass arrivals at breeding sites begins in April and ends in early may. 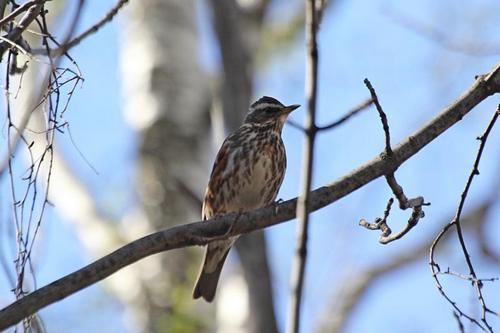 In city parks Redwing settles more crowded, and in natural forests, where much more space, dispersed. This bird prefers the birch undergrowth, in which there is a small admixture of spruce seedlings. Redwing prefers a light place, where a lot of bushes and there are bodies of water, and avoid dark spruce and pine forests. 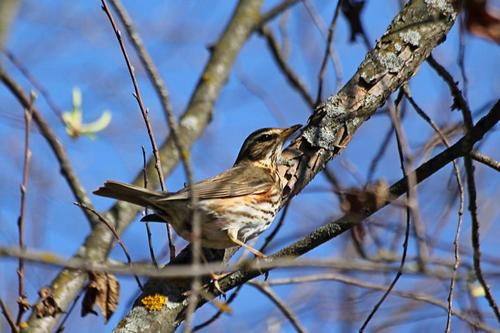 The food of the Redwing consists mainly of insects, earthworms, various butterflies and caterpillars. Earthworms, in the fledging period, Redwing bring in their beaks not one but the whole bunch that drops down in the nest, and then distributed among the Chicks. 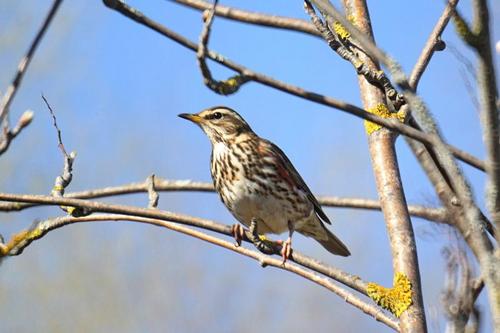 The thrush, the Fieldfare (Turdus pilaris) is also common form of thrush. Body length — 22-27 see the Feathers of the back dark brown, belly and underwings are white, the wings and tail are blackish-brown. The breast and flanks are buff with dark streaks. Restless and very active bird, constantly emits characteristic sounds Chuck … Chuck … Chuck , in the alarm state begins a deafening rattle RA-RA-RA 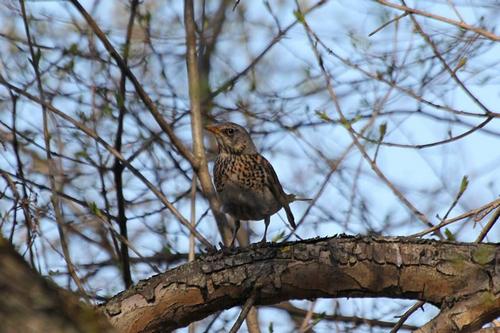 The Fieldfare is different from other thrushes primarily a way of life. Although some pairs nest in isolation, most of them going in average colony size, with 30-40 pairs. They love to settle in parkland and in coppices, on edges of forests, close to wet meadows. In the dense forests of mountain ash is not found. A Fieldfare feeds on both animal and plant food. In winter flocks of fieldfares flock to feast on ripe mountain ash and other berries (e.g. sea buckthorn). 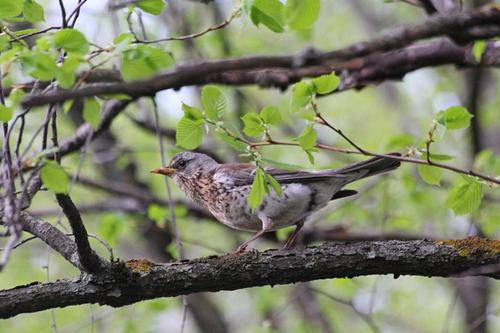 The Fieldfare breeds in colonies (up to 30 pairs). Socket — lasting and deep bowls that are then high, then low, then quite openly, disguised. Some colonies completely ruined crows, jays and magpies. Blackbirds are protected, rushing on enemies stone down and covering them with litter. Bombs from the litter are deadly weapons, so how can so pollute and glue the feathers enemies, that they will not be able to fly. People expect the same “attack” if they come to the colony. 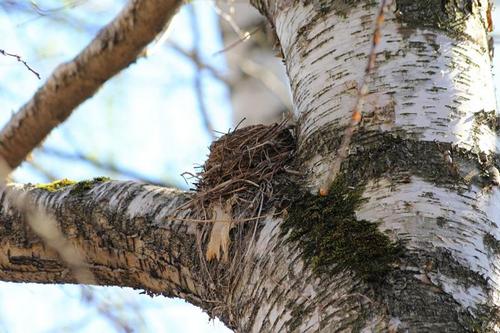 A nest of this species of birds builds a female. The task of the male is to support and protect the nesting sites and its second half. Material for the construction of a female, if possible, gathers nearby. The nest is a bowl is quite massive, the inside is lined with soft grass 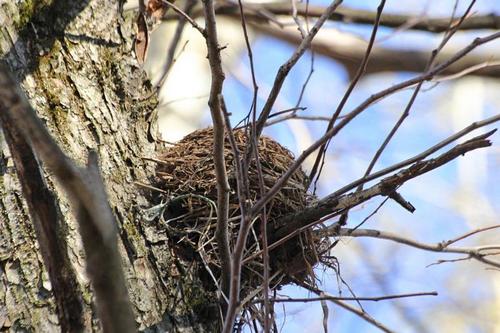 The Redwings begin building nests in late April, about a week after the start of construction is delayed the first egg. If the bird settles in the finished nest, oviposition is accelerated. During the selection of the nest or building a bird becomes very careful, it does everything that the nest was invisible. For Redwing is typical to place the nest close to the ground. Unless there is a reliable masking and reliance, the birds will gladly arrange there the top. They love the base of various trees, or use a small half-rotten stumps. 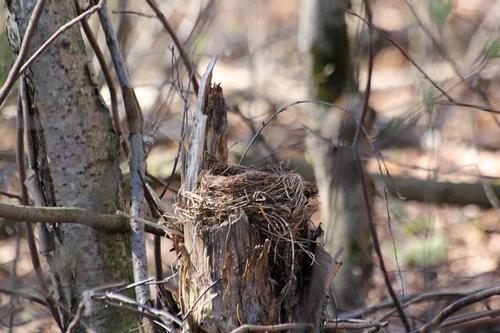 Extremely rare to see a nest of Redwing, located on the hills, in the hollows of trees, or on fences and railings. But if the Redwings will have a choice to make a nest in the hills, or just on the ground, overgrown with grass, the second option for these birds is preferred. The only exception are the parks that are frequented by people. In this case, Redwing make nests in trees out of reach of Park visitors. 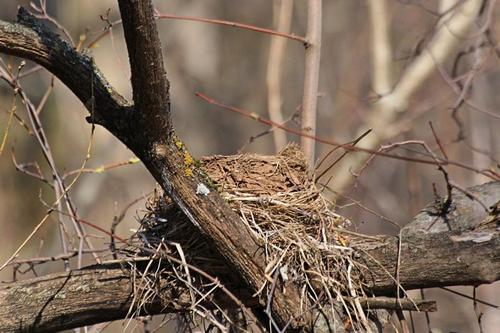 The nest of the Redwing may vary depending on the nesting sites. If the foundations are strong, then the socket will be more massive and large. But if the nest is built on the thin branches of the shrub, it will be easy and graceful. You can see randomly made a nest in the case of location it on the ground, and primitive nest in holes located deep in rotten stump. 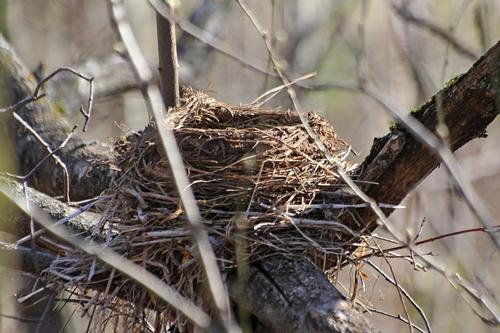 In clutch there are 4 to 7 eggs. Eggs greenish with brown spots. Incubation begins after laying last egg and continues for 12 days. Over the summer, laying there twice. 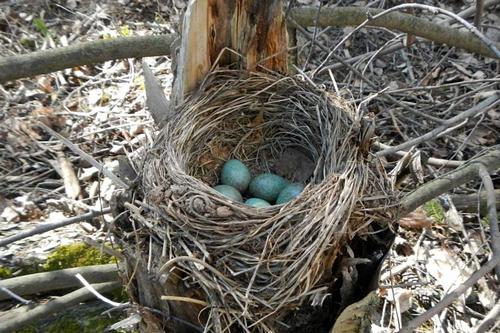 Let’s see the color of the eggs of the Blackbird are they blue, and why such impractical and quite noticeable color nature chose for them? In the catalogue there is an official name of “color eggs thrush” (robin egg blue) for color code #00CCCC is this:

On the website of Popular Mechanics I found an interesting article: Why the Robin’s blue eggs?

It would seem that bright, attracting predators egg color — a dubious evolutionary advantage; much more likely to survive the Chicks that hatch from mimicking the environment of the speckled or plain eggs. 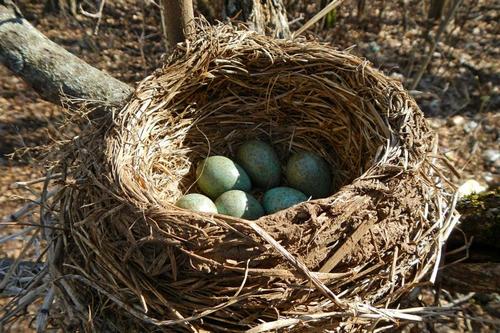 However, the bright fashion of the eggs of certain songbirds including thrush is an undeniable fact, and scientists have long been trying to explain it. It is obvious that the blue color of eggs should be a benefit that outweighs the increased risk that the clutch will find a snake, weasel or hedgehog. The most common among ornithologists theory to date is that the blue pigment in the shell serves to space invaders for protection from the sun. 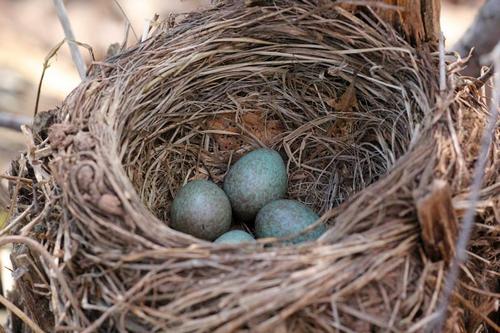 Some songbirds lay eggs of different colors and shades — from white to a bright azure. It is possible to determine how the shell eggs of the same species, but different colors holds sunlight. It turned out that the blue pigment reflects destructive for DNA ultraviolet light; however, at the same time, the blue shell absorbs the infrared rays, which warms up the contents of the eggs, speeding up embryonic development, resulting in a range of other problems. 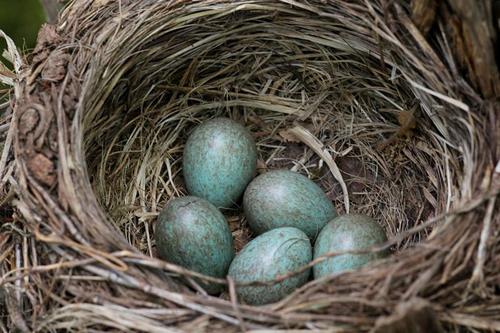 The conclusion is this: the blue colouring of the eggs of the nest — the result of a delicate balance between the desire to protect yourself from UV rays and not to overheat the egg; this strategy works only in a certain climate, and that not in every case — so some birds lay eggs of different shades. 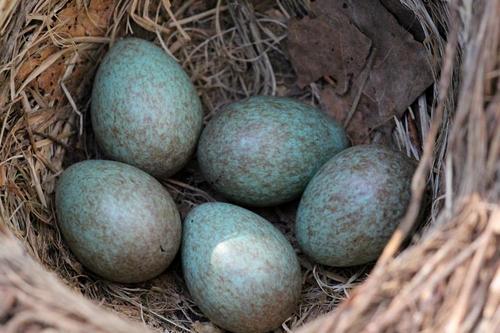 In these same nests that in the previous photo, some time later hatched Chicks: pink, wrinkled, with messy tuft of fluff on the head and along the spine. A couple of tiny pterodactyls. 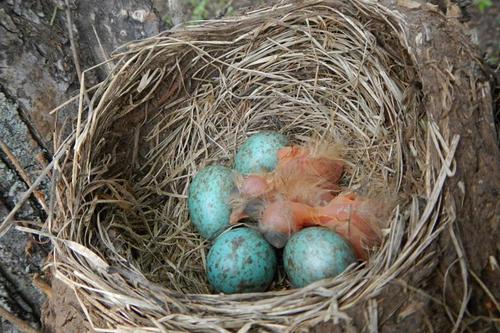 They are very small, with huge relative to the size of the head black, not yet open her eyes. 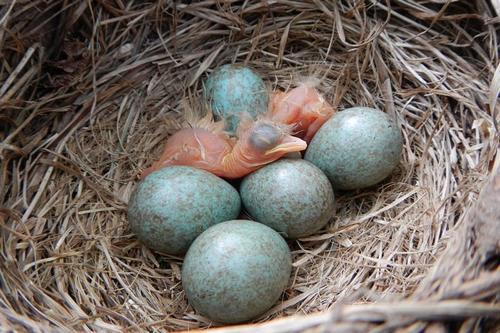 In the nest they will be short-lived as the Chicks will quickly grow, will jump out of the nest, and they will have to hide in the grass where parents will bring them food. 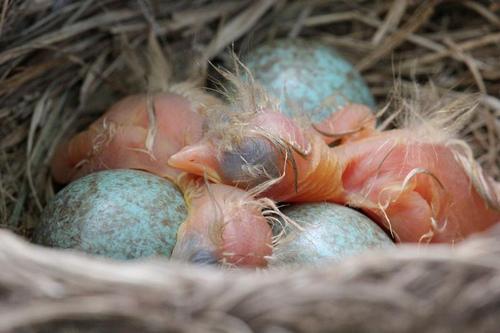 After the Chicks leave the nest, and it happens 10-12 days after birth, they live on the ground. Not even being able to fly, they are very mobile and move quite large distances from their homes. However, don’t lose each other, so as to continuously hear the voice of other Chicks, and parents guide their children, showing where to move. 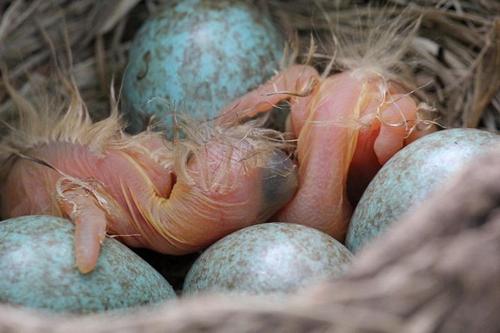 As soon as the chick develops the ability to fly, his agility increases, but they fly only if they are in danger. 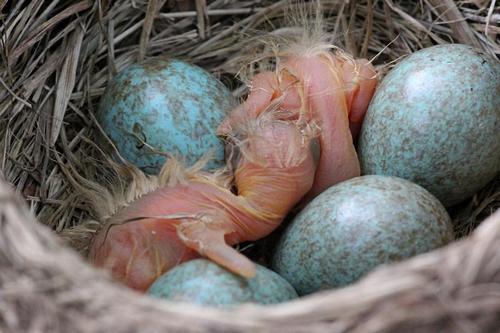 And a small video with Chicks of thrush-the Redwing nest, where there are still a few nephrosclerosis eggs:

2 Comments on “Eggs, Chicks and nests of thrushes”