Larks are small birds the size of a Sparrow. They live on all continents, but most species of this family are endemic to Africa or nest in Eurasia. Individual members live in America (horned lark) and Australia (lark Javanese).

Family Zhavoronkova refers to passerine birds. It consists of species of small and medium sizes.

The beak of birds of this family differ among themselves, depending on the species and genus. Protective coloration of birds helps to camouflage to the surrounding area.

The family Zhavoronkova there are 19 genera, consisting of 80 species. All these birds are excellent singers. Singing their sonorous and melodious.

About 50 species of birds listed in the Red book, 7 of them are under threat of extinction.

These birds prefer open spaces. They live in meadows, fields and steppes, in deserts or semi-deserts. But there are some species that occur in mountains or in forest clearings.

In Russia there are 14 types of javoronkova:

The most common of them is the forest and the skylarks.

Largest field lark is slightly larger than an ordinary Sparrow. He looks flashy. He has soft feathers that contribute to the protective disguise. The back bird has an earthy-brown colour, with black and brown spots. Abdomen yellowish grey-white. On the head a small tuft. The mild wings with two bright stripes. Tail brownish-grey, outer tail feathers are white. The tail has a shallow cut. Males differ from females in ability to sing and size. They are a little more.

Natural areas of habitat of the Skylark are the edge of the forest and meadows covered with grass. For their nests the most suitable fields sown cereal plants.

The nest of this bird is quite primitive. It is most often in the small hole in the grass on the soil surface. As a construction material used stems and roots of herbaceous plants. Inside the nest draped with fur, feathers and horsehair, collected for these purposes. Housing your birds try their best to disguise. 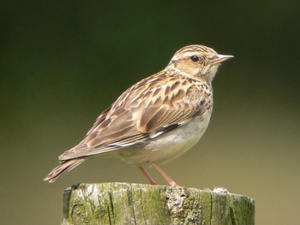 Engaged in building the nest the female. In may, she lays eggs (up to 6) and within 14 days to hatch. Chicks totally blind. Their bodies are covered with fine fuzz. The kids are in the nest ten days. Then they leave the parental home, but still unable to fly and to feed on their own. So a few weeks while staying in the thickets of grass among stalks of wheat and rye, they get food from their parents, gradually necessary for acquiring independent living skills.

The main food for the Skylark are the seeds of grasses and herbaceous plants. Their diet consists of small insects, various larvae, pupae, and spiders. To work properly the stomach, birds pick up small stones.

Lark never gets food in flight or on very tall stems. He finds the only food on earth. Birds quench thirst with dew. These birds love to bathe in sand or dust.

Larks field pertain to migratory birds. For the winter from Northern areas, they migrate in the South. They overwinter in North Africa, South Asia and Western Europe. Departure for wintering starts in September, and in October flights to all individuals. Flying North, birds of this species stay in loose flocks high in the sky. Before sunset they descend to the pools, remaining there all night, and early in the morning with songs and shouts rush on.

The ground nesting Skylark arrives early, as soon as open areas there are thawed. Initially, the birds continue to stay in the pack, but then break off into pairs.

The songs of skylarks poor sound, but very melodic. The bird combines the stock music, which are in her possession. She sings long and loud, ringing bells shimmering trills, it seems like this is ringing the blue sky, the hot spring sun. Usually sings the lark on the fly, lifting the circles up. He then quickly descends, continuing to flap its wings, making circles. In this song it becomes more and more jerky, it begin to dominate the whistling sounds. Stops singing bird at a distance of about 20 meters from the ground. She spreads her wings and slides down dramatically.

The singing lark continues from dawn to dusk. Sometimes it can be heard in moonlight nights. While the male sings, the female just sits on the ground or fed. Females are inconspicuous, and unlike males, they are rarely seen.

Skylarks benefit agriculture. They consume large quantities of ground beetles, leaf beetles, click beetles, weevils and other beetles. They also eat ants, caterpillars, true bugs, and locusts. In addition, they compete with mice. Birds are not shelling the grain from the growing corn and potirayut the ground. Large quantities of birds eat seeds of weeds in the fields. 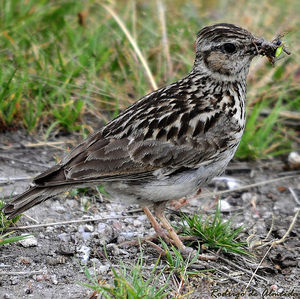 Lark or woodlark is a bird of small size, looks very similar to its field counterpart. The tail has the same color as that of the Skylark discreet. On his head a barely perceptible crest. The only difference is in size. The forest is somewhat less. And the tail is noticeably shorter.

Often, Yula sits on the branches of trees, what other kinds of larks do not. Arranging her nest, the bird often chooses a place at the foot of a tree, stump or Bush. It is constructed of loosely stacked dry blades of grass. Of thin stems and a small amount of horsehair intertwined in the tray.

The clutch usually consists of 4-5 eggs are yellowish or reddish-white color with small grey or blackish-brown spots. Most often, a year is 2 walls.

This species is distinguished from the field their habits. Most of the time Yule is the crown of the trees, sitting on a high branch. In pursuit of the insect, the bird runs fast on the ground. In early spring, rushing through the trees, softly feathered artist, but melodically sings: “Julia-Julia-Julia-Julia,” for which he received its name.

Crested lark prefers to choose places to stay in the neighborhood with the settlement: on vacant lots, gardens, around the ruins of old buildings.

The crested lark is a ground bird. He very rarely flies over buildings and avoid to sit on shrubs and trees. The bird runs fast on the ground, raising and lowering large crest, looking around. Wings uses rarely, preferring the movement of the earth with his feet, however, when need flies well. The color of the bird helps to merge with the sun-bleached vegetation and become completely invisible.

In late winter larks parujutsja. With a song in spring, they fly into the air and after a short flight, sit near the place where the nest is built.

Black bird for its size, color and body type differs from most other species. This is a fairly large bird, with a thick and strong beak. Its body length is 200 mm, weight 60 g.

In contrast to all other kinds of larks and most other passerine birds this birds have black feathers. His shoulders and the feathers on the sides and tail, as well as small flight feathers edged with pale stripes. Against the black color of back and sides seem to be covered with a Crescent of whitish spots.

The spring light edges of the feathers are upholstered, and the lark seems to be completely black. Total coal-black color complement black legs and dark brown eyes. Is allocated only a grayish beak.

Habitat of the black lark limited. It breeds in semi-desert, sagebrush steppe, in Kazakhstan and saline lower reaches of the Volga .

It is a nomadic bird. They swarm in the fall and undertake a wide dispersal, which ends in March. At this time you can hear the songs of the black lark for nesting. He sings, sitting on a tussock, drooping wings and raised tail. Shortly after the chants can be seen as the female chased by several males. The black lark, unlike other species, the number of males significantly prevails over the feminine.

Most often the nest is tripled near the water. It is fragile, the rough structure of last year’s stems, located in the deepening of the soil.[embedded content]