Grow carp in golevyh cages installed in a shallow freshwater lakes. Juveniles get here from females aged 4-8 years (think 6-7 years). The average working fecundity is 300 thousand eggs. In concrete swimming pools with an area of 50 m2 to 10 females a boost of 20 young males at the age of 3 years.

For spawning, use twigs of thuja. Spawning takes place at a temperature of 20°. Fertilization exposed to 1/3 of the postponed caviar. Immediately after spawning branches with caviar transferred to fry rearing rectangular pool with a muddy bottom and concrete walls, where hatching of larvae and rearing of juveniles during the month. The depth of these pools of 50-60 cm laid On the bottom of the pipes through which the water is injected atmospheric air, whereby the oxygen content in the water does not fall below 3 ml/L. 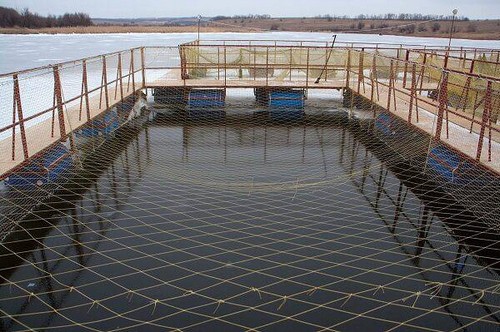 In the early stages of growing larvae in 5-7 days and fed with zooplankton (mainly Daphnia), which are bred in special concrete pools. Here make poultry manure at the rate of 1 kg per 1 and pre-treating it Ca based 100-200 g per 1 m, and yeast. A week after filling water in the pool in the mass of the developing zooplankton. 1 kg of growth of carp larvae spend 3-4 kg Daphnia. After a week the larvae transferred to the starter feed of the following formulation:

The content of crude protein in the starting aft — 42 %, fat 5 %, ash — 10 %. Feed sets automatic portion feeders. At subsequent stages of cultivation used 6-7 types of feed with different sizes of granules.

A course for profound intensification of production is the main direction of work. Here consistently implemented the transition to industrial methods of fish farming in cages and pools, which gives the opportunity for the best teams of the company to obtain from each hectare of ponds on 40 kg of marketable fish.

A rigid frame for delevic cages serve steel piles hammered into the lake bottom by two parallel rows, between which is arranged a deck to service the cages. In every tank planted 10 thousand fry. During the summer the growth of juvenile stocking density is gradually reduced, and the fall was adjusted to 3 thousand units on my tank.

On stilts in the center of each line, consisting of several dozen cages, place a small feed stock. Feed here bring in bags or soft containers on the boat. Hence the feed in the automatic feeders delivered a hand truck.

By the fall of the second year of cultivation of a commodity carp reaches an average weight of 1 kg and is in implementation. Daily consumption of granulated mixed fodders for cultivation of dokladov also is 4-5% of the mass of the fish. Used 3 kinds of feed with granule size from 3 to 7 mm. the protein Content in compound feed production — 39 %. Starter feed 2 times more expensive production. Feed mills of Japan are produced and floating granulated feed, which is 20% more expensive than usual, so it is used only when the demand for common carp is increasing.

Along with the commodity is grown and ornamental carp of different colors, which are in great demand and is used for stocking numerous small lakes and ponds in parks and recreation areas.

The processes associated with summer content and growing manufacturers of carp, consist of two stages, each of which poses its own particular challenges to producers. 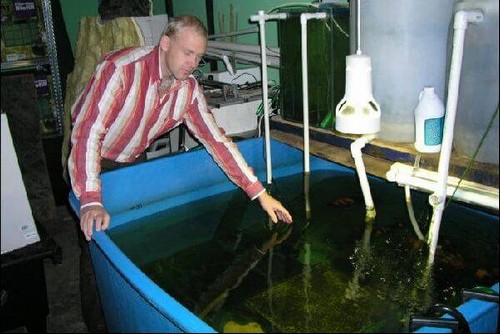 In the pre-spawning period the main objective of the fishery is to ensure the speedy recovery of gonadotropic and physiological functions of the fish organism after winter and prepare them for reproduction. For the release of organs and tissues of the producers from the accumulated winter toxins, restore the balance of amino acids and vitamins in fish, stimulating their functional activity is required, usually 15-20 days. Therefore, unloading of the wintering ponds in Siberia and the Urals should finish before 5 – may 10, in the middle lane until 1 may.

No long-term peredergivali manufacturers in zimbalo when the temperature of the water. This is especially dangerous when combined wintering males and females. Before spawning, they should sit in different waters. If this is not done, the fish is disturbed, the process of maturation of the gonads, lost reaction to a partner, and there is a failure of the reproductive cycle.

The area of nursery ponds should be at least 0.1 hectares, otherwise their harvest and selection of the nests will be difficult. The optimum size of ponds” for content producers before spawning: the area of 0,2-0,3 hectares, average depth is 0.7 — 1 m. they should not be rigid vegetation, irregularities on the bottom, it is necessary that it was no channels and concrete slopes and sloped to the outlet. Planting density in the pre-spawning period depends on the mass and sex of the fish.

When transplanting, transportation, and preventive treatment of fish must be extremely cautious because even a minor injury in the pre-spawning period may lead to blockage of the oviduct in females, non-spawning, and even the death of the producers.

Predicting sex of the fish when landing in the seedling reservoirs must be given the highest priority. Mixing manufacturers of different sex in the seedling ponds very dangerous. Especially a lot of harm can cause replanting of males in the pond, where the aged females. Two or three males can stimulate spawning in almost all of the females in the pond that can lead to the complete disruption of spawning campaign for the current season, since reproductive function in females, carp can be restored only after a year.

The first two or three days after landing, the food manufacturers do not take even under favorable climatic and hydrological regimes. So to feed the fish at the moment should not be, and need to carefully monitor their behavior, to remove weak individuals, with impaired coordination and reduced response to danger. Feeding should start when the water temperature is 10-12°. On the first day give a small portion of food and followed its palatability. If the fish are okay to consume food, start to complete feeding. Daily dose of feed depends on the weight of fish and temperature of the reservoir.

At a water temperature of 10-16 fed twice a day, over 16, single, carefully controlling its palatability. If the producers stop feeding under the influence of various factors (wind, pressure differences, lack of oxygen in the water), it is better to take a break for a day or two than to give untouched fish feed to turn sour.

Great importance is the composition of the diet, it often depends on how the economy provided food. The composition of the diet in the pre-spawning period should meet the following General requirements: the content of digestible protein should not be below 22 % (including at least 20% of animal protein), fat — not less than 2% and carbohydrates — not less than 50 %. As a mandatory Supplement, wheat germ is introduced from the calculation of 15-40 % of the diet. The wheat shoots up to 1 cm contain significant amounts of Tocopherols, stimulating reproductive function in fish.

In the pre-spawning period is very important to observe the behavior of fish. In the normal state producers in the pond, slow moving groups of 3-10 fish, scared of sudden movements of the observer and loud noises. On slow, fluid movements of a person react calmly. After 3-5 days they have produced a strong response to feeding, fish tend to thrown in the water subject. Deviations in the behaviour of producers indicate a change of mode of the reservoir, dangerous for its inhabitants.

Seasonal growth consists of increasing the mass of the fish body due to linear and volumetric growth of organs and tissues, as well as recovering mass of sexual products, swept away during spawning. This is especially important for females. If you take the mass of females after hibernation for the source, the expected increase during the summer should reflect the true growth rate and mass recovery of the gonads.

Consequently, the initial size should take the weight of females after spawning and to calculate the stocking density and the amount of feed required to total growth for the season.

Thus, in a very short period of summer foraging manufacturers have enough to grow rapidly. Average daily gain of body weight should be at least 14-16 g, and this can only be achieved with sparse planting and proper feeding fish. For the zone of Siberia and the Urals can be considered an optimum planting density of producers in a joint farming females and males from 120 to 200 pieces per 1 ha, in single — female 180 – 230 males and 250-300 pieces per 1 ha.

Summer content producers — responsible and complex process step, which depends on the spawning success of the campaign next year, and should be given much more attention than is common in most fish farms.