Breed of dog Petit Brabancon bred in Belgium, and refers to a small Belgian dogs. It is also called the Brabant Griffon. This is a small decorative dog, very affectionate and friendly, quick, nimble, agile, easy to train and studying various tricks. Small Belgian dogs are divided into 3 breed, which differ only in the type and fur color: Belgian, Brussels and Griffon Petit Brabancon. The Belgian Griffon black, stiff as wire coat of medium length, Brussels — the same wool, but red in colour, and allowed the black mask on the face. And breed Petit Brabancon hairless, somewhat reminiscent of pugs on the structure and type of short coat as red and black. 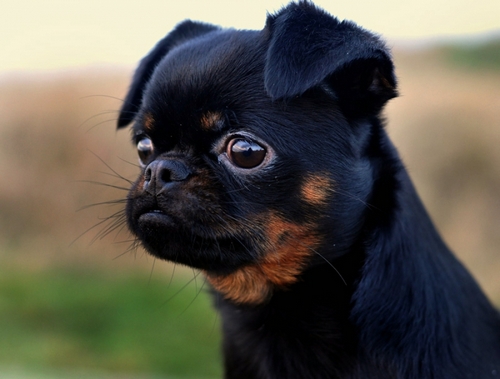 Breed of dog Petit Brabancon bred in Belgium, and refers to a small Belgian dogs.

Breed Brabancon, also known as the smooth-coated Griffon, Petit Brabancon, Griffon Brabant, or small Brabancon, first appeared in the nineteenth century in Belgium and is a pure breed Belgian origin. There is an assumption that all griffons are descended from affen Pinscher, which they are very similar, and the dog Petit Brabancon probably has the blood of pugs.

This Griffon were taken to combat rodents, which at that time was set as in the palaces of princes and in the homes of ordinary citizens. Dogs coped with their mission, as they were small and quick, that helped them quickly catch up with household pests. Dogs were trained to catch the rats behind.

In addition to this goal, small Brabancon was entrusted to protect the Royal carriages, however, a cheerful disposition and decorative characteristics quickly made it popular as a companion and friend of ladies who appreciated their easy-going character. Good health and sustainable over time completely translated it in this quality.

See also: Horses: description and characteristics of the breed, care and maintenance 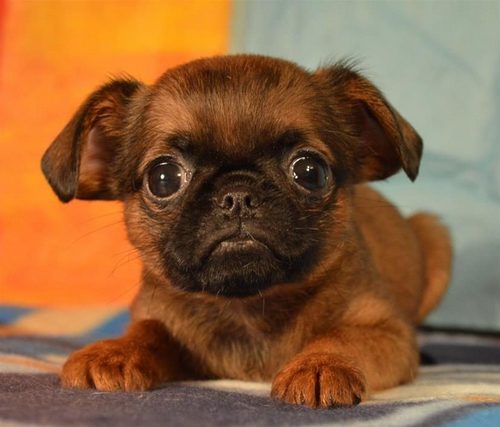 This kind of Griffon bred for rodent control.

Brabancon dog almost square format with a sturdy compact body, strong but at the same time elegant, weighing from 3.8 kg to 6 kg, whose height at the withers ranges from 8 to 19 cm Head is a notable part of the breed as it is quite large compared to the body as a whole.

Length straight and shiny coat not exceed 2 cm, and beard, typical of Brussels and Belgium species on the face of Brabancon missing. Thanks sderota tiny nose, a dog has a very opinionated view and looks very funny. The coloration of the coat can be black, red, and even mixed: black, red and brown at the same time. May have dark mask, which old dogs have is turning gray or becoming gray. Some dogs in Europe, cropped ears, however in Russia similar treatment of the griffons is not practiced.

The care and feeding

Care representatives of this breed is easy and consists of daily brushing with a brush and walks that he needs to maintain good physical shape and good health. In addition, it should provide the opportunity to communicate with other dogs that Griffon is of great importance. But if there is an urgent need, for example, it is very cold or illness will befall the owner, it without any problems can easily be accustomed to go to the litter tray.

Wash the baby not more than 1 time per month special shampoos for dogs, then you can dry a hair dryer. Winter bathing should not be. To walk the dog better on the harness.

In the choice of food animals is quite picky and only eat what they like. Initially, therefore, have to experiment with several diet options and choose the one that will suit the taste of pet. Balanced dry food of high quality can be the basis of the diet of Brabancon. The best nutrition advice to give to a veterinarian or breeder who has raised a puppy. 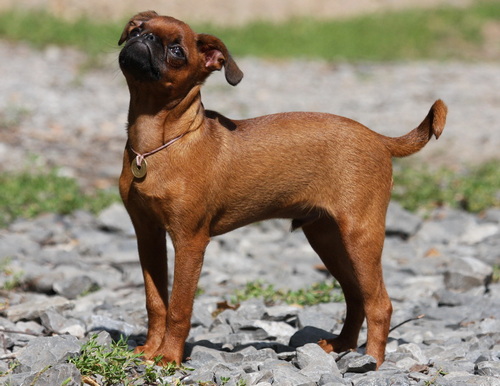 Puppies Petit Brabancon get immunity from mother’s milk. The breed has good health, which with proper care, it only gets better. But if you care for your puppies correctly, you do not take preventive measures to prevent diseases or to prevent contact with an already sick dog, the Griffon could get sick. Problems can occur in the most vulnerable areas, which for them are the eyes and the respiratory system. In summer, dogs can overheat under strong sunlight. Immunizations launch from 2 months, it is better to use a complex vaccine capable of protecting puppies from several types of diseases. Before vaccination, be sure to proglistogonit the dog, otherwise the body may give unpredictable response.

In addition to infections, this breed, like many other small breeds of dogs, has difficulties in childbirth. Puppies Petit Brabancon be born by caesarean section, so you need to take care of the veterinary clinic and find the right doctor whom you can trust your pet’s health. And the rest of Brabant Griffon is a very sweet, intelligent, charismatic and charming dog, a true friend of man.