It is a mistake to think that worms may not appear from the domestic cat, which contains the house. Parasites can bring into the house, even the owner, without knowing it. What to speak of those Pets, which were allowed to walk several times a day.

Unfortunately, to see the eggs of the worms is absolutely impossible. In addition, another carrier of worms are fleas. Fleas lurk not only in the wool street animals, but also thrive in the grass, waiting for the next victim.

Modern medicine offers a great selection of anthelmintic drugs. One of these, well-established in the pharmaceutical market drug is Drontal. This tool has several advantages. It can be used in the treatment of very young puppies and kittens, and had very little side effects. Means perfectly removes the animal from parasites and absolutely not harmful to the body.

Signs of worms in Pets

Parasites can live not only in the stomach of cats, but in the eye infestations, as well as in the lungs. If we consider the intestinal parasites, the symptoms of their stay in the body the following:

When the worms become many fragments of their bodies can be seen in the feces.

The drug Drontal for dogs and cats

Release it in pill form. Blister furrow separating the eight white pills oval. All Packed in a box with detailed instructions inside. Is this drug German pharmaceutical company.

Keep it for five years in a dry dark place inaccessible to children. In the event that the expiry date of the medicine is over, get rid of him. Overdue drug use is prohibited.

Use Drontal for the treatment and prevention of worms. The tool is not toxic, but in rare cases may cause vomiting in an animal. And it is not recommended to give the drug to pregnant cats and dogs.

How to give the drug

Many pet owners are animals when it comes to treatment complaining about the inability to feed your pet a pill. In the instructions to Drontal you have any tips for the occasion. It is recommended to hide the tablet in food, preferably in a small piece of meat, which the dog will immediately swallow. Worse with cats. They very often notice the pill in food and ignore them. In this case, grind the pill and distribute it throughout the food. Try to give the medicine cats in the morning when they are particularly hungry.

Many owners do not wait, when a pet will agree to eat the pill and just shove it in his mouth. If all the ways to quietly slip the medicine in vain, then you can also use this method. Do it as gently as possible, stroke a pet, hold his mouth until he swallows the pill.

For kittens it is advisable to use a suspension. Put it into the mouth of the kitten with a syringe without the needle.

Introduce the pill to the cat as deep as possible into her mouth to decrease the likelihood that he will spit.

For the treatment of animals released a special tablecolumnmodel – pillery. They appear in the form of a syringe, at the end of which is tablet. If you use tablecolumnmodel, the risk of being bitten is reduced. Before the procedure moisten the mouth a cat or dog water and deeply enter the drug. The animal during treatment, it is hard to hold as long as it doesn’t eat the medicine.

Some swaddled their Pets and placed them on the back. Then release your mouth and push the pill. Pet might bite you, but will not scratch.

Of course, it is best to choose the favorite dish of your cat and put the pill. For example, it may be processed cheese. Medicine is best crushed and mixed with soft cheese. Roll into ball and let sit in the fridge. A hungry cat will swallow it without thinking twice.

Drontal for dogs and cats is calculated as follows: one tablet per ten pounds of body weight. 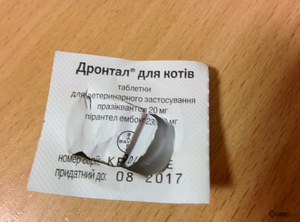 Drontal is a combined anthelmintic drug with broad spectrum of activity aimed at the suppression and death of the parasite in the stomach of cats and dogs. Under its scope come with both round and tape worms. The drug is rapidly absorbed in the intestine, and the remains of it completely excreted in the feces.

The active ingredientsincluded in the composition of the drug to paralyse the muscles in nematodes which leads to their death and also facilitate the withdrawal of the parasites from the body.

Prescribed drug at nematodosis and cestodosis, as well as the prevention of parasites. This medication has almost no contraindications, except individual intolerance of the individual components included in Drontal:

The norm for the animal is: one tablet four kilograms of weight. Recommended to give the drug in the morning during the first feeding. For the application of this tool does not require pre-preparation in the form of laxatives or diet therapy.

Immediately after the start of treatment in cats may experience some strange behavior, but this should not bother you. The cat may walk more swaying or sitting for hours without moving. Perhaps the appearance of mucus in feces. All these symptoms gradually pass as you recover the animal.

If the symptoms are delayed, it is best to seek the advice of a veterinarian. Perhaps the best way for your pet to change to another drug.

If you suspect your cat worms do not tighten with treatment. First of all, hand over analyzes of feces in a veterinary clinic. Only there can determine the presence of worms in the intestine.

When picked up on the street kitten, in most cases, he already has worms. Treatment is best carried out under medical supervision. The fact isthat when the worms start to die EN masse because of the action of the drug, the possible intoxication of an organism of the kid. In this case, he will need additional funds. You may need intravenous injections of antibiotics. 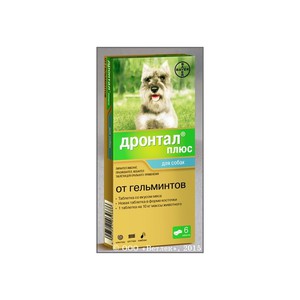 Person while working with this drug should take precautions. Wash your hands before supply of the drug, and after it. In case of contact with eyes, rinse them running water. If for any reason you accidentally swallowed the pill, contact your doctor. Don’t forget to bring the instruction of the drug. Exactly you should do if you experience an allergic reaction.

Packaging, which was Drontal, it is forbidden to use in the future for domestic use. Remember that people can easily catch worms from your pet. Do not kiss dogs and cats in the face, especially if they regularly go on walks and socialize with other animals. Protect yourself and your family.

One Comment on “Drontal for cats and dogs application instructions”