The German boxer is the most energetic, strongest and toughest dog in the world. They are called boxers because of the unusual fighting style: when fighting they cause the enemy strikes with its front paws, as if these boxers in the ring. At the same time for muscular ferocious exterior lies a quite good-natured temperament: the boxer communicates with other children and loves to play, making it quite a popular pet to keep at home. 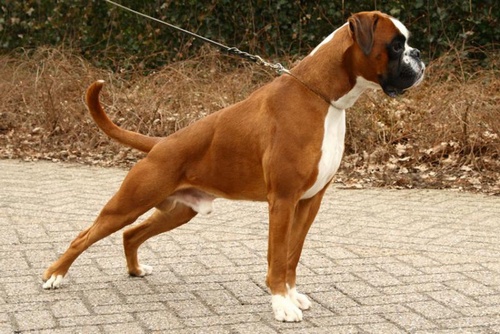 The German boxer is the most energetic, strongest and toughest dog in the world

The ancestors of boxers were the etching of a hunting dog involved in the hunt for wild boars. Huge head and wide muzzle with pincer jaw allowed these dogs to easily grab prey and hold it until the arrival of the owner. Etching dogs were bred before almost the entire territory of Europe and was then called bullenbeiser, which means “biting the bulls”. It bullenbeiser and became the progenitors of modern and favorite by many dogs boxers.

Boxer dog with familiar modern appearance began to emerge in the 18th century. Etching dog already had a wide short muzzle and strong jaw pincer, allowing them to hold prey and to breathe freely. Breeders in those days focused on these qualities of dogs and actively developed. Then the dogs began to cut off the ears and tails as the most vulnerable in the fight torso. A new kind of bullenbeiser got the name “boxer”.

The use of firearms the government has introduced a strict moratorium on public baiting animals, and boxers were left without work, and the breed was threatened with total oblivion. However, the features of the breed are that the boxer is a dog that is able to be not only an excellent hunter but also a great guard and a shepherd. This quality dogs interested the sellers of cattle and butchers, and the boxers began to slowly become the shepherds. To improve new security qualities of the dogs were crossed with the breeds of English and American bulldogs, from whom they received a larger body, shorter head and a large presence of white spots in color.

Until the late 19th century to new herding dogs in Germany were treated with great contempt. It was believed that the descendants of the etching dogs are primitive animals, and they will not be able to perform tasks assigned to them. For the dogs stood up famous and competent animal trainer, Frederick Robert, who proved that the advanced representatives of the boxer breed can far better solve their tasks than the etching of a dog. After such authoritative protection the boxer was allowed to participate in dog shows, in addition, was developed by the international standards of the breed. Over time, the boxers have become so popular and common in Germany that they began to have a numerical superiority on almost all dog shows.

The boxer is a fairly compact dog of small size but with a very impressive appearance. A purebred dog has strong bones, well developed musculature, and his body proportions to form a clear square. In every, even the smallest movement felt the dog’s strength and nobility. Head shape went to boxers from their distant ancestors, the etching of dogs. The skull has the shape of a cube with a small bulge from the top, as well as a fairly sharp transition to a slightly pinched muzzle the massive. The upper jaw of a dog is shorter than the lower 1.5 cm, which makes the breed special pincer bite, allowing them to effortlessly a long time to hold on to prey. Lips fleshy boxers hanging by the side, his nose slightly flattened and slightly upturned up.

At the beginning of the formation of the breed boxers from etching dogs got cropped ears and tail, it was believed that such individuals look the most presentable. But in 2000, the transaction was prohibited, the standards of the boxer breed rewritten, so now the tails and ears are not cropped boxers. Color of a boxer can be red or brindle in various shades with a black mask on the muzzle. Allowed the presence of small spots of white, which can take up to 30% of the surface of the coat. All white boxer in the international standard and description of the breed is not included, as it is believed that such individuals be born deaf, although the objective proof of this. 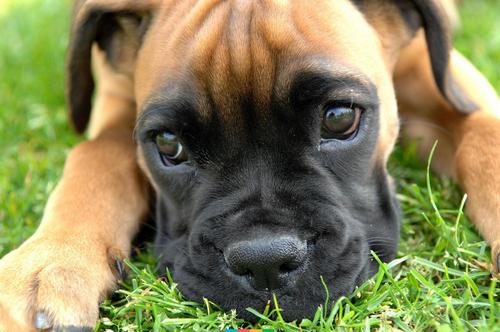 The nature of the dog

Boxers are energetic dogs with strong temperament, but at the same time, flexible character. At home he behaves very quietly, is good for all family members, and loves to play, loves to play and is ready to participate in all activities. Regular walks in the fresh air and frequent regular exercise is mandatory for dogs of this breed. Boxers get along well with Pets, but strangers to the animals, they are quite wary, and the neighbor’s dog or cat will never be able to pass them safely. Wary will be the boxers and to strangers, if they were not socialized properly.

These dogs have all the qualities of these guards and soldiers: courage, strength, agility and speed. These qualities in conjunction with skilled training, making them excellent guards. But for all its power and external power fighters is childish and nice. From his master, they did not achieve the desired pressure and aggression, and affection and charm. Representatives of this breed are very devoted to their owner, and use every opportunity to be near him. 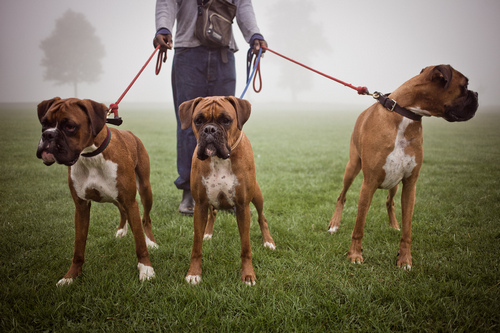 German boxers are pretty easy to care for. Coat they have short, it almost never gets confused, so do not need regular brushing. Bathing of this breed is more of an annual ritual than a daily, so soiled while walking the section of hair you can just rinse with clear warm water. Irrepressible energy these dogs require daily long walks and regular exercise. It’s good to feel at home maintenance, the boxers are only for daily loads, otherwise their unused energy can find negative output. These dogs do not tolerate heat, so in very hot days animals are better not to bore long physical exercises. Require special care eyes boxers, so while Hiking you always need to have on hand a soft cloth to remove particles of dirt and dust. When redness of the eyelids must be put in eye soothing ointment.

Representatives of this breed differ a good appetite, which can lead to the development of obesity, so diet dog you need to think carefully and do not overfeed the animal.

Boxer is a lovely dog, they are playful, inquisitive, but can not stand alone and need regular communication with the owner and constant training. However, the time spent is not wasted, because in return the person receives a great friend and companion, ready at any moment to come to the rescue and protect from the enemy.