Long-haired toy Terrier — a true treasure of Russian cynology. Despite the fact that the breed is relatively young, she managed to find a well-deserved love and popularity among people who prefer a decorative miniature dogs. Funny dog combines a lot of great qualities: beautiful appearance, reasonable curiosity, sociability, activity, and peacefulness. They become wonderful family members. Easy, friendly and flexible nature, easily find common language with all the household. Sweet, gentle and sociable creature leaves no one indifferent. It’s therefore not surprising that the big-eyed bright-eyed dogs so common on the streets of Russian cities. 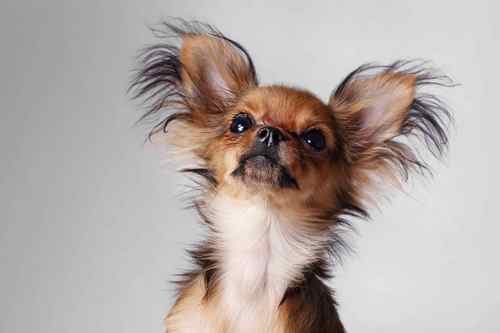 Long-haired toy Terrier — a true treasure of the Russian cynology

The history of the formation of the breed

The progenitor of the breed was the classic smooth-haired Terrier. He, in turn, came to light in distant Manchester through mixture of blood the Whippet, Greyhound and the English Greyhound. The first members of the species appeared in our country in 1716-1725. One of the dogs imported from England, belonged personally to Peter I.

But long-haired dogs were bred in the Soviet Union, for which he received an appropriate name — otherwise called the Russian breed of dog of the Terrier. The first individual was born in Moscow in 1957, the Mother dog was a bitch with slightly long fur, and the father — classic smooth-haired Terrier. Newborn called Chikki. It was unusual for this breed appearance: the legs and ears of the pet attended the fun fleece. The baby, who had such unusual ornaments, stood out from the rest of the shorthaired offspring. In this regard, a team of handlers, led by the breeder Flame, decided to consolidate this unique appearance in future offspring.

When Chikki increased slightly, it tied with the female, which had slightly extended wool. The result of this experiment exceeded all expectations of experts — the light born from 3 healthy calves. Each dog had long hair. Since the kids were born in the capital, they were given another name — the Moscow long-haired toy Terriers. Over time, animals have gained immense popularity in the USSR. Appreciated for their impressive looks, custom size and docile nature. In 1964, the breed first took part in the exhibition. And after only 2 years was adopted by the official standard, which prescribed the basic requirements for the members of the species. He operates to this day. By the beginning of 70-ies the population of the breed has reached 300 copies.

However, the good times for the Russian toy Terrier did not last long, with the beginning of perestroika in changing the country flooded with foreign goods. In the Soviet Union brought not only products, but also strange dogs of small breeds. Interest in long-haired Terriers who have already managed to slightly annoy people, began to decline rapidly. The breed was on the verge of extinction. Only 10 years later the dog was engaged in its restoration. Fortunately, everything went well. Today clubs of fans of these miniature dogs exist in many parts of the world. 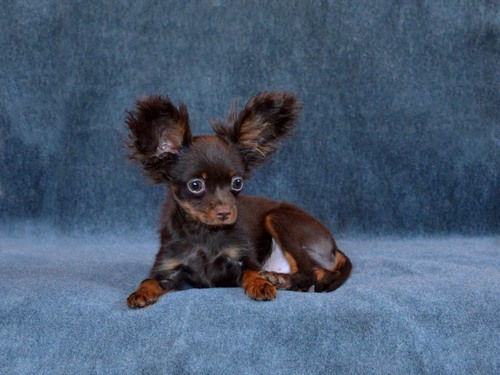 Looks like the Terrier can be described in just few words: small, agile and elegant dog that has high limbs, thin bones and lean muscles. Sexual identity is very weakly expressed in the exterior, however, evident in the behavior of the animal. A brief description is enough, if you want to get a General idea about the breed.

But if you decide to purchase a purebred four-legged pet, you should be familiar with the full requirements of the official standard:

See also: Varieties of furminators for dogs and rules of their application

The Terriers have moderately long fur. The average length of hairs 3-5 cm Hair is straight and wavy, tight to the body. On the front of the legs and the head hair shorter. On the back of the legs, conversely, lengthened. There are silky feathering. The lugs on the edges are covered with downy hairs with a length of about 6 cm or more. 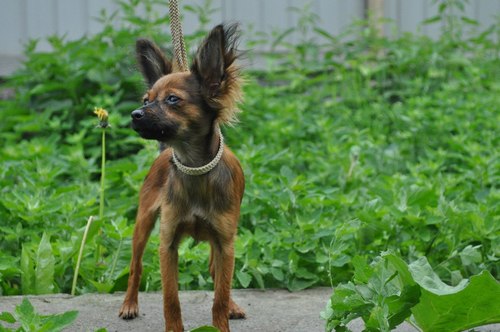 The standard recognizes several types of colors animals. Is considered a classic black-and-tan toy Terrier. Such specimens are much more common than others.

Also there are other colors:

A distinctive feature of Pets are compact in size. As a rule, the height at the withers of the animals ranges from 18 to 26 see Particularly large specimens can grow up to 28 centimeters. Normal weight is about 1.5 kg.

Despite its compact size, dogs that Terriers are holders of a very ardent temperament. However, if the owner will be able to find the pet approach and correctly, it will bring up the dog will demonstrate the exceptionally docile nature. Terrier will be happy to listen to other family members and carry their team, but only if they learn to control the dog.

Miniature dogs must be carefully controlled. If you do not give education enough time, intolerant nature will make themselves felt. Even so small, but ill-mannered dog can create its master significant challenges. It will be no breaks to bark and may even go into action. As a rule, the object of furious animals choose their own kind. A particularly bold individuals may try to attack and larger dogs. At worst, such impulses can end with a visit to the veterinary clinic. These particular species require vigilant monitoring, and active physical exercise. After a long walking the dog simply does not remain forces to demonstrate the harmfulness of his character.

Moscow longhaired toy Terrier is ideal for single people and for large families. He is nice with children, especially those whose age is older than 4 years. And with kids pet, may find a common language, but only if he received proper upbringing. The main thing that the dog is getting enough attention. If you realize that you do not have time for playing with a pet, it is better and does not start.

Another distinctive feature of the animal — excessive merlefest. As soon as the temperature falls below 0°C, pet begins to feel uncomfortable on the street and shaking hard from the cold. It can only save warm outfits. If you don’t want to spend money on buying clothes for dogs, better pay attention on animals with thicker woolen cover.

Many dog owners mistakenly believe that small toy dogs do not need careful nurturing. In their view, do create serious problems. The result of such a frivolous approach to training for many people have to face on the street with unmanaged dogs that constantly bark. And at home in a kennel is a little hysterical tyrant, which is simply impossible to negotiate peacefully.

To prevent the worst, to educate dog should immediately after she appeared in the house. Moreover, to train a pet is easy: it has a remarkable intelligence and wit. Long-haired toy Terrier can easily assimilate both simple and complex commands. The speed of learning depends largely on how well and consistently the owner raises the puppy. Normal animal has to know and follow the basic commands: “next”, “place”, “sit”, “lie”, “no”, “give”. It is important that the dog performed the tasks immediately, the owner did not have to repeat them repeatedly. It is advisable to practice exercises not only at home but also while walking. If this is not done, the dog will follow commands only in rooms on the street to achieve obedience will not succeed.

If the owner will make every effort and just lucidly explains the animal to your requirements in further training difficulties will not arise. Establish the rules of behavior should be immediately after the new family member showed up at the house. The restrictions will help the dog to understand who paired the leader and what the owner wants it to achieve. Little Pets quickly learn that biting the master’s things going out anywhere is impossible. Over time, the animal will understand that it is forbidden to take food from other people’s hands, jump in the household at the meeting and to bite the hands of man during the games.

Trust the upbringing of the animal can be, even for children older than 7 years. Small age is not a hindrance, perhaps a child that faster establish the contact. To facilitate control over the animal, make sure he gets enough physical activity. 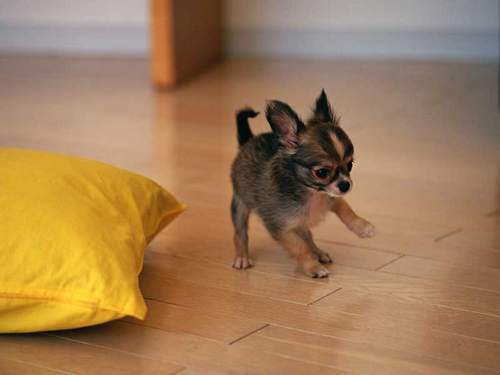 What to consider when choosing a puppy

To buy a puppy of that-Terrier to have in your pocket the required amount of money is not enough. When choosing a cute, brown-black lump you need to consider several important factors. In this case you will get a beautiful, healthy and adequate animal.

The first thing you need to pay attention to the conditions of detention of the offspring. If the puppies are hungry and neglected, live in overcrowded and unsanitary conditions, it is better not to risk and to go to another breeder. You should also not make a purchase from the owner who is poorly versed in dogs, trying to evade the answers to your questions, or demonstrates gross incompetence. Should not buy dogs in the markets, near the metro station, in underground passages. There is a risk that there you can slip a sick pet or even sell black and brown puppy is an entirely different animal.

Before buying, inspect the appearance of the puppy. The animal should not have dandruff and skin diseases. Unacceptable the presence of inflammation, rashes, redness, wounds. Mucous membranes should be clean and pink. Special attention should be paid to the dog’s behavior. The kid must be curious, active, communicative, friendly. When you take a pet on his hands, he can be frightened. That’s OK, because you new people.

Before you buy be sure to examine all the documents. The animal must have a veterinary certificate, which lists details of all vaccinations. 2 months should be placed 1 vaccine, 3 months — 2. The document must be given information about the dates of vaccination, bear the stamp of clinic and signature of the doctor. Without them, the procedure is invalid.

If the dog is purchased for participation in exhibitions and competitions, she must fully comply with the breed standard. To judge the external data pet in 2 months is still very early, so it’s best to acquire the dog, which had turned 4 months. At this age to assess the exterior of the animal much easier. The pet show class must be pedigree. The breeder must give the owner of the “puppy card” is a special document, which later needs to be exchanged for pedigree. 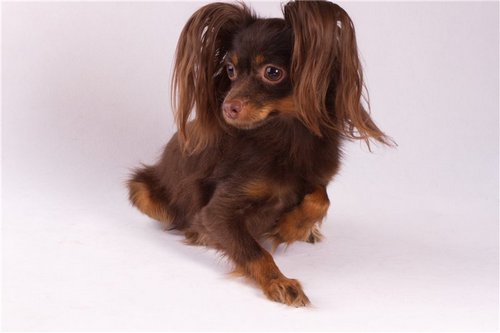 Long-haired dog needs to eat properly and balanced. Many breeders recommend to use for feeding your pet dry food. They contain all the vitamins and minerals necessary for an animal. The purchaser should give preference to feed a premium or Deluxe. Cheaper foods can cause irreparable harm to the health of the dog.

If you choose to feeding natural food, be sure to include in the diet with special vitamin complexes.

Sample menu may include:

Little dogs love to get treats. This delicious delicacy they consider dried trochee. They can cook themselves using the drying chamber, or to purchase in a special shop. As a reward you can give to Pets dried fruits, especially dried apricots, slices of Apple or banana.

Strictly forbidden to give dogs:

Animals should always have access to clean cool water. You need to change it at least once a day, preferably more often.

The Terriers don’t require complex care. With the care of small Pets easy to handle even for beginners. Just follow a few simple rules:

Proper care of the Terrier — the key to a beautiful appearance and health of your pet.