Interest in Laika as a hunting dog, originated in yaroslavschiny in the 30-ies of the last century. Active participation in this work received great enthusiasts and lovers of hunting with Laika, who became the first breeders huskies: V. A. Teplyakov, I. S. Plotnikov, F. N. Maslennikov, K. Fomin, V. V. Averkiev, A. S. Malakhov and others. 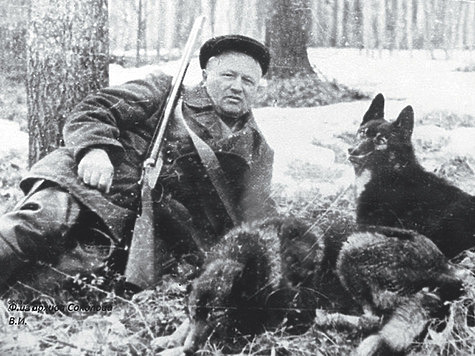 N. In. Kuznetsov, photo by the author.

An invaluable contribution to the popularization of the breed huskies in the prewar and postwar period was made by the Yaroslavl writer, artist, historian and a passionate hunter N. In. Kuznetsov.

In his essays and short stories, he literally sang his husky, based on your generalized experience of hunting with this breed of dogs and with lots of love telling us about hunting with Laika as a versatile hunting dog.

In 1955, he wrote and published the book “notes of a hunter with a husky”, which later entered the collection of short stories and essays entitled “My friend likes” in 1962, published after the author’s death.

In those years the hunting dog was under the wing of the state, even during the war worked in nurseries commercial dogs.

The most common sequel of sorts gave taken in 1945 from the Kostroma heartland black and tan Wild N. In. Kuznetsova. In 1949 from a mating Pellets Muraviev was with him received a Fly Y. P. Makovskogo, from Mink averkieva dog Bozo N. In. Kuznetsova, from Alma, Teplyakova Ginny Teplyakov II, and Alma Ardasheva — bullet Shigorina and Storm Janeckova.

In 1952, by close inbreeding in the Wild (II-II) and a pair of Jack-Ginny Maslennikova in article III-III from binding Tape Kuznetsova with Fly Makovskogo were obtained black-and-tan, cibrik N. In. Kuznetsova is one of the leaders in the rings of the Yaroslavl exhibitions of the mid-1950s years, and the Sable Storm Janeckova Gruzdeva gave a black-and-white Ayu N.D. Lebedev (formerly pehtereva).

The top Maslennikova with Bullets Chigorin gave Fido Milto and Ginny Volkova, from which the result of close inbreeding were obtained in 1956 Tarzan V. I. Melnikov.

It was the breeding material, which possessed the Yaroslavl fans of huskies to the time of the creation in 1954 of the Yaroslavl regional Consumer’s Association cattery of Russian-European huskies (station “Lutovo”, 40 km from the regional center). Huskies in our kennel were taken from the nursery, VNIO (station “Zavidovo” in the Kalinin region.).

In his book “My friend likes” N. In. Kuznetsov writes about the likes of the Yaroslavl region: “This breed possessing the most valuable universal qualities, has gained the sympathy of many hunters.

Now there is no need to bring huskies from the far North and North-East. In our region a lot of good huskies at exhibitions and licensed field trials.” Interest in the breed as a hunting dog grew violently that it was possible to trace the according directories.

The first Laika experts in the field was Sergei Ivanovich Plotnikov (expert since the late 1940s, Yaroslavl, Russia), Ivan Uraev (expert since the mid-1950s, Rybinsk). First certified in field trials Laika was a Joke B. V. Maslennikova (D. II. protein, 1950), and its owner Boris Maslennikov in the late 1950s, has become the third expert on the likes in the area. 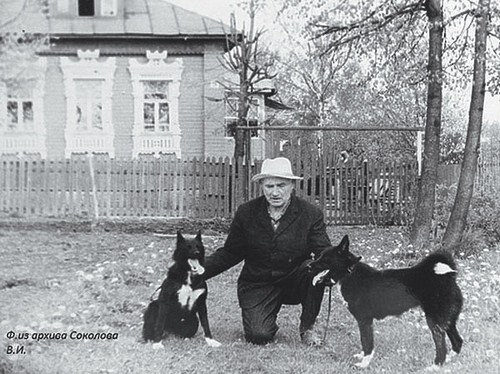 The first champion of the Yaroslavl exhibitions in the late 1950-ies was a Fly I Yu. p. Makovskogo the excellent rating of the exterior, three diplomas of II degree on squirrel and duck and two cool descendants (Zenta Bogdanova V. A. and the first paradiplomacy Bob K. I. Aref’eva). The owner Flies I Yuri Petrovich Mackowski in the 1990-ies received all-Union category of expert-the cynologist on breeds of huskies.

37th Regional exhibition of 1957 was the last, when all the huskies passed the examination on one ring, indicating differences in the type (Zyryan, Karelian, Ostyak or Vogul’skoe).

In 1958, at the next exhibition in Yaroslavl the expert of all-Union category E. I. Shereshevsky (Moscow), and in 1959 the expert of all-Union category A. V. Fedosov (Moscow) revolutionary method carried out the selection of all presented in the ring the number of likes on two standardized in 1952 breeds — Russian-European and West Siberian Laika.

Selection is made by appearance. Métis conventionally attributed to one of the first two groups, but put them closer to the tail of the ring with a low exterior estimates. In the formation of Russian-European huskies the huskies were selected primarily black and white color.

After these shows the sort of breed Russian-European huskies continued the unit of the Yaroslavl dogs. In the first place is occupied the first place in the conformation ring black piebald Con I V. I. Alekseeva (born in 1957, from Blackie Torunova and Venus Lysova with 1/16 part of the blood check of the Sables ‘ -Paki).

He gave of h Beans K. I. Aref’eva dick 1271/LRE Yu. V. Skvortsova and Joke 1272/LRE Aref’eva and I. V. Alekseeva Nera (Tarzan Melnikov — Dina Danilova) — True 1155 /LRE I. M. chlenova and AGC V. I. Alekseeva, included in the pedigrees of many modern Russian-European huskies in Yaroslavl, Vologda and other areas.

In Moscow a group of Russian-European huskies were infused blood Cibrica N. In. Kuznetsova N. In. through his daughter Saidu A. F. Lysikova and Dina P. A. Vlasov using her son’s True Zastavkin V. P. (formerly M. E. Ustyuzhanina). All this happened on the first after the adoption of the standard stage of development of the breed.

Thus, in the formation of Russian-European huskies of the Yaroslavl region includes not only the hours Fly Y. P. Makovskogo, but first and foremost her father’s Wild N.In. Kuznetsov and Kuznetsova Jack and Malek A. S. Malakhov.

In further work, beyond its population, and especially to those that existed at that time in the nursery Erops, the Yaroslavl fans of the huskies began to establish ties with other centres of breeding of this breed huskies in the first with Moscow and Leningrad (now St. Petersburg) and later in Kalinin (now — Tver), Kirov, etc. and exchange of breeding material using methods such as nonresident mating, the import of puppies from the best manufacturers and even delivery of adult dogs.

Since the late 60’s-early 70-ies the population of elk and wild boar began to grow rapidly, and they began to hunt with the use of huskies.

First Laika, certified by a boar in the early 70-ies was Akbar B. M. Guscina (b. 1970 from h Beaver h 1336 and 1334 Affection Zemnova). But after a decade in the directory 60th Anniversary exhibition 1983, dozens of Yaroslavl of the Russian-European huskies had diplomas on the free beast (wild boar). Among them, h 3065 Fawn A. F. Shkurenkova and Yugan 3810 D. N. Petralova with diplomas of I degree.

In the 80-ies, when were popular dogs for free wild boar, a huge role in preparing these dogs chetyrehkantnye steel cages in the Uglich, Rybinsk, Lyubimskiy, Pereslavl, Nekouz and other areas, which allowed to identify the best dogs in the work on the boar.

During these years, except for hunting of ungulates, and of great interest to hunters provided hunt with a husky on fur-bearing species and especially marten.

But the difficulties in testing and the reluctance of some owners to show their Pets on the marten allow to reveal not all dogs of this direction in the work. Only a few huskies came into the view of experts-cynologists.

The most extensive tribal use in the 2000-ies, as in the Yaroslavl region, and beyond, received two high-class manufacturer Yaroslavl breeding h beam 8792 Nosova, A. I. (g. Furmanov Ivanovo region) and h Amir 9005 Brankin A. I. (Rybinsk, Yaroslavl region).

It is noteworthy that the latter has no pedigree nor h Baron 5581 or 5582 Fight.

Different origin and manner of work, they differ in type. BIM 8792 increasingly inherited exterior features mother h Fir 6844 and grandfather Combat 5582, and Amir 9005 is an improved type of the paternal grandfather of dick h 3988 Skvortsova K. D. and his mother part of the Taiga 3237 Makarov V. M.

On the other line mother 9005 Amir Jan 8108 A. E. Sokolova “added” to his phenotype more blastcasta.

In the Yaroslavl region of centralization in the breeding of hunting dogs in General and huskies in particular, was not. In different parts of the region and breeding work with the breed Russian-European Laika was engaged in Alexey Philipovich Shkurenkov (tutaevsky R-n), Alexander Degtyarev (Rybinskiy R-n), Sergey Vashchilenko (Lyubimskiy R-n), Vyacheslav A. Trofimov, Viktor Ivanovich Potechin, Anatoly Ermolaev, Andrey Akishev (Yaroslavl), Sergei Germanovich Turkin (myshkinskiy R-n).

The positive in this work was that between the handlers responsible for breeding work, was always dominated by trust-based business relationships, the exchange of objective information on husky this breed inside the Yaroslavl region and beyond. This is the key to the success of maintaining a good reputation Yaroslavl of the Russian-European Laikas.

Possessing a large and high-quality livestock, Yaroslavl land became the center of breeding of this breed.

Four of the monopedigree exhibition of Russian-European huskies past in the Yaroslavl region has shown that it successfully develops and makes a worthy competition to other breeds huskies, in particular, in the field events of high rank.

And it could not pass unnoticed, not only for the Yaroslavl hunters, but also for lovers of this breed from other regions and neighboring countries.