The biggest dog in the world is the Irish wolfhound. Its height at the withers exceeds 90 inches, and weight is 54 kilograms. Of course, judging by the height, the breed record holder. However, there are other breeds that are superior to the Irish wolfhound on other parameters, such as the St. Bernard. This is the most difficult and therefore most large breed dogs. According to the breed standard, it can weigh from 65 to 120 kilograms and the height reaching sometimes 90 cm.

Each of these breeds has its advantages and wonderful qualities, which were developed by man from these fine animals over the years of breeding. They are great helpers and friends, always ready to save one from emergency. That is why these rocks and created such a powerful, huge and strong.

These dogs can be the height at the withers to the waist of a grown man, but despite their size, they are very friendly. Yes, a huge dog can love a person and care for him like a guardian angel. So what is it, the big man’s best friend?

The origin of the breed the Irish wolfhound 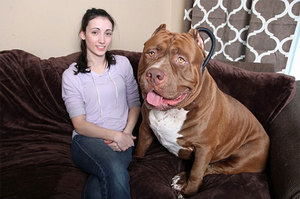 Any idea what the biggest breed of dog in the world was bred in Ireland around 7,000 years ago. In Irish literature, Dating to the V century, these dogs were called si Paul (“dog / Irish-dog / military dog / wolf”, etc.). The prefix C was used next to the names of respected warriors and faithful kings in written documentary sources.

Based on the found artifacts, researchers believe that the breed was already well-known in the year 273 BC. In written sources it is claimed that the Celts survived the Roman conquest, fiercely resisted the invaders on the battlefield along with the big dogs. This historical fact is mentioned by Julius Caesar himself in his treatise “Galilee war”, which was written in the IV century BC

Irish wolfhounds bred by peoplemainly in hunting. Still the Irish bred them not only for hunting but also for protection. During the conquest of Ireland by the British, the biggest dog in the world became very popular among the nobility. Large puppy was the best gift to important personalities and foreign dignitaries.

Irish wolfhounds in the middle ages

In the “History of Ireland”, written by Edmund Campion in the sixteenth century, a description of the dogs used in hunting wolves in the Wicklow mountains. The author notes the factthat this big dog was very popular and massively exported from Ireland to other European countries, and above all, they are very interested in the Royal house. Excessive removal of these dogs led to a sudden decrease in the number of wolfhounds in Ireland.

So, Oliver Cromwell, publicly declared at the time that the remaining dogs of this breed are not enough to control the population of wolves. The man who has devoted his life to the revival of this breed in Ireland and England, was George Augustus Graham. He lived in the 19th century, had the rank of captain. Unfortunately, the number of Irish wolfhounds were too low. In order to revive the breed, breeders and the followers of Graham were crossed with the Greyhound, including Scottish, German shepherd, English Mastiff. In 1885 captain Graham with other breeders created the breed club and model breeding. 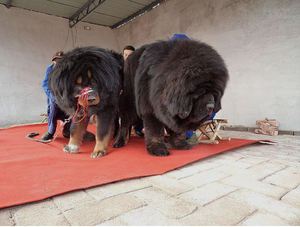 The rise of the German dog at the withers is high, can exceed 90 cm and a weight of 91 kg, is the largest dog. Usually, at the sight of this huge dog on the street, people parted respectfully before her. Since this breed has a very impressive appearance and posture. However, in fact this large dog is a wonderful friend and person, with a very fine mental organization, sometimes referred to as gentle giants.

The history of this breed began in the 16th century, when European nobility began to breed big, strong and long-legged dogs for hunting. Those who are now called Danes are descendants of Mastiff, crossed with English and Irish wolfhounds. In Germany they just called Hund Englishe or Tock , Docke – English dogs. In other European countries the situation was similar, the ancestors of great Danes there just called Dog, thus signifying their English ancestry.

Varieties of dogs in those days were many, however, particularly valued the big dog from Germany. They successfully hunted bears, boars, deer. The most beautiful representatives of the breed were sold for big money, they were held in the noble and Royal houses. For special merits and beauty, tall height, dogs received from their owners is not only good food, but gold collars, and the right to sleep in the bedroom of his eminent master. In General it was not a fad of a wealthy nobleman, after all, a strong big dog was protecting its master even in sleep against enemies during the feudal strife.

Dogs less than pleasant and pretty, but has a quite good hunting qualities, were awarded the silver collars and were kept in the house. In Germany called Leibhunde , which translates as “Pets”.

All other, less worthy of attention, just called Docke and kept on the noble kennels – ” Englishe Stall “.

After the advent of firearms, huge dogs simply don’t need hunters. And gradually their breeding went into decline. Many types of dogs in Europe simply disappeared, not even preserved in people’s memory. The breed became very rare, bred her active only in württemberg, and it is not for hunting, and as a dog-assistant in economic Affairs and for protection. This big dog was called “Ulmer Hund” Dog or Ulmer.

In 1878 the Berlin Committee, composed of the best breeders and judges a dog competition, has described the dogs as a separate breed. Two years later in Berlin, was created “Deutche Dogger” club, which later was engaged in the improvement and breeding great Danes.

The St. Bernard is a heroic biography of the breed 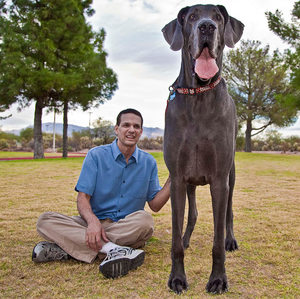 These amazing the largest dog, rescue human lives. The growth of St. Bernard’s breed standard high — 90 cm at the withers and weighs up to 120 kg. This powerful breed has a wonderful history.

The ancestors of the St. Bernard served the people of the century in the Swiss Alps. Huge dogs helped man the farm – grazed cattle, went with the masters on the hunt, they found a way in difficult transitions. Protected the property and people not only from other people’s ill intentions, but in emergency situations, which in the mountains is a lot.

By its origin they are considered to be descendants of molosser-type dogs that came to the Alps from Ancient Rome along with soldiers of the Empire.

The first written mention of the breed was in 1707, when the monks staged in the mountain monastery of St. Bernard refuge for travelers and pilgrims. The name St. Bernard named rugged pass and the trail that went through him. In the monastery held the pilgrims.

Monks, for search and rescue lost in the mountains of travelers, decided to take his assistant to the local dogs. And there was a remarkable name in this breed. Its mission dogs performed great. Their amazing ability to anticipate avalanches, gorgeous scent, which they found under a deep layer of snow affected person earned these beautiful giants of the big success around the world.

Until now, people cherish the memory of St. Bernard named Barry who saved for their lives and forty people. One of the rescued was a boy, who is a huge dog carried on the back of 5 kilometres, fighting with deep snow.

The modern St. Bernard, however, is very different in appearance from their legendary predecessors from crossbreeding with other breeds. In 1816 and 1818, the years in the Alps was a very difficult winter. The snowfall was unusually heavy in an avalanche, saving people, killing so many dogs that there was a problem of rescue of the breed.

Saints had to cross with the Newfoundland, but this was not a good idea. As Newfoundland, though a large dog, but not so well to endure the cold and snow of winter, as the St. Bernard. Breeders had to work hard to keep the basic working qualities of the breed.

It should be noted, that the Bernards stored in the genes of its main intendedie to save people. Therefore, a good representative of this breed do not even need special training, the dogs are older successfully teaching the young the skills of rescue.

The first breed club was founded in Basel in 1884. And four years later, the St. Bernard was listed among the first breeds of dogs in the Swiss state stud book. 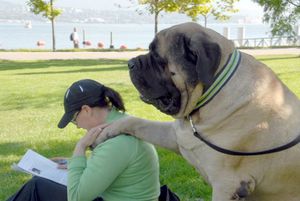 Even among these huge animals there the only ones distinguished by their unusual features. For example, an Irish wolfhound named Kane is the owner of the longest tail in the world of dogs. The length of the tail is 76,8 cm

Standing on hind legs, the Irish may be higher than even a very tall adult men in excess of 2 meters.

Recently, in 2014-m year died tallest dog in the world – the great Dane Zeus, the record holder, listed in the Guinness Book of records. His height at withers was 111,8 see When Zeus stood on his hind legs, it turns out, was slightly lower than the tallest man in the world – see 226 the weight of the dog was also significant for this breed is over 70 kg.

As I recall his owners, Zeus was eaten in once 12 cups of food.