Presumably, the ancestors of the Serbian hound was the dog that came to the Balkans from Asia Minor. Most likely, Serbian hound, can rightly be considered the first rock formed in the Balkans. This beautiful dog is a natural hunter. The powerful body and shoulders to help her cope with any situation. 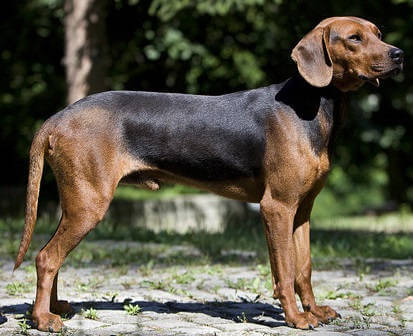 Dog running in packs, hunting as big game and small. Has a fairly clear voice, and prized by hunters. The characteristic of this breed is the presence of well developed hunting skills subtle flair, high voice, impulsiveness, reckless.

The first mention about this breed appeared in 1905, where it was called the Balkan hound. Recognition FCI dog got in 1996, the approved name to the Serbian hound.

The dog has a medium size weighing about 20 pounds. Body hound with a slightly elongated, legs long, smooth. The forehead is broad, the muzzle is elongated, the eyes are oval, brown. The coat is short and thick.

The purpose of this dog – hunting. Not suitable for apartment living, in a cage, in the role of a pet. In serious need of exercise and long walks. A true hunter and companion.