Russian peggy hound – a dog that has an excellent flair, high intelligence and extraordinary endurance. Thanks to such qualities, she became an excellent helper for hunters. If you look at the historical side, the breed can be called young, but in just a quarter of a century it has managed to reach the world wide and gain popularity. 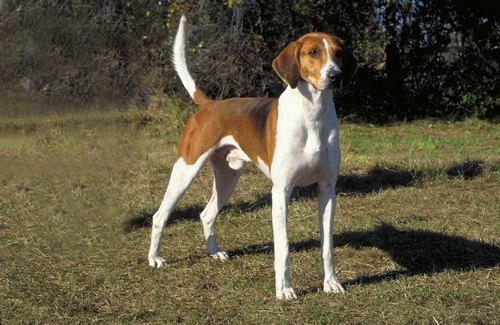 Russian Piggy Hound – a dog that has an excellent flair, high intelligence and extraordinary endurance

Origin of the breed

Officially, the Russian Pergaya Hound breed was recognized in the 19th century, but hunting dogs with similar external data in Russia were bred long before this event. Earlier formation of the breed was prevented by uncontrolled crossbreeding, because of which dogs with one phenotype changed their external characteristics and lost their working qualities.

When the community of the breed line was lost, and in every region different hounds began to appear, the hunters had no choice but to acquire hunting dogs abroad, and most often these were English foxhounds.

At that time, the British breed was distinguished by stability, uniformity and gradually acquired superiority in hunting. But the domestic representatives of Russian hounds could not boast of excellent working qualities – they did not have the malice for game and the ability to cast a loud voice. 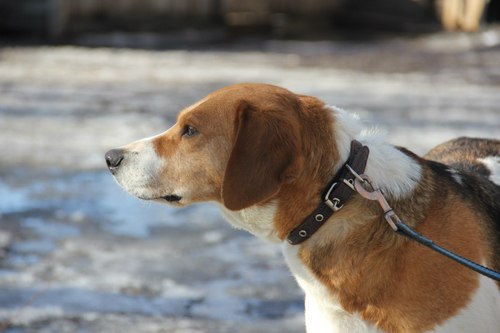 Officially, the Russian Pergaya Hound breed was recognized in the 19th century

Naturally, Russian breeders needed to breed their own breed, and for this Russian dog, the gonchak had to knit with other, more successful representatives – foxhounds, French hounds, while not forgetting the mandatory adaptation to the terrain.

The work was carried out in several breeding plants, and all breeds participating in this process are for sure unknown. The work was stopped during the Civil War, and the dogs practically disappeared, but the breeders did not give up hope, and as a result a breed appeared – the Anglo-Russian hound.

Officially, it was registered in 1925, and in the 1940s there were already 5 breeding plants in the country with it. The Second World War could not but affect the breed of hounds, but, as it is not surprising, its qualities have improved. However, to the detriment of quantity.

Anglo-Russian dogs could not fully justify the expectations of breeders, and selection work continued, but flocks of leading Russian breeders – Moscow, Kiev and Tula – were already used. Thanks to the well-coordinated work of breeders, persistence and consistency, a breed that meets the set requirements has appeared – the Russian Pergamon Hound.

Despite the fact that in the breeding of hounds, representatives of different breeds took part, yet in appearance there is a marked similarity with foxhounds. According to the standard characteristic, it is a balanced, intelligent dog, of medium size, with a strong physique. As for the general characteristics of the exterior, it is typical of the Gonchaks.

Dogs have a marked gender difference in individuals – males are larger, they have a wide skull and skeleton. Body weight is not limited in the standard description, but usually ranges from 25 to 30 kg. The growth of males varies from 58 to 68 cm, the female – from 55 to 65 cm.

In official documents, the Russian hounded hound is described as follows: 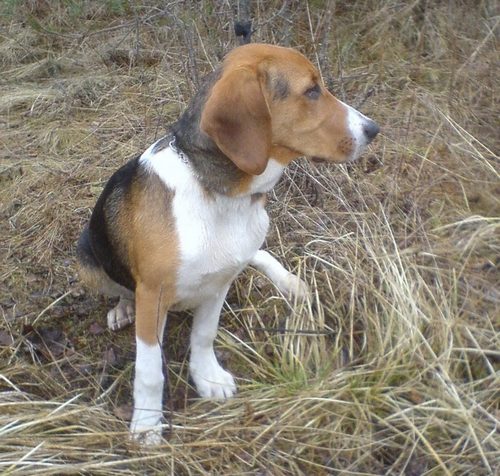 A Russian dog hound has a short-haired cover, a dense skin that does not have wrinkles or folds. As an exception, you can mark the groin line – here there is a fold, when the dog moves. The length of the ostevy hair varies – in the area of ​​the muzzle and paws it is shortened, on the body its length is 4-5 cm, in the region of the hips and withers the standard allows for a somewhat elongated coat. On the tail the coat adheres to a thick layer, which makes it thicker and more massive.

Undercoat in dogs is present, well developed, but not too dense. It can repel dirt and moisture. The presence of strips is considered a pedigree deficiency.

There are representatives of 3 colors:

The paws and the peritoneal region are white in color, the marks of a reddish, gray or reddish hue near the croup, shoulders, and skull. The standard does not limit the size, coverage area and number of spots. It is allowed to have dark, non-intensive specks and dark arrows in the temporal region.

Most representatives of hunting breeds have an unrestrained temperament, but not a Russian hound piebald. These dogs are rather restrained and act in a balanced manner, which, against the backdrop of an acute scent and anger towards the wild beasts, is an unusual manifestation. But such complaisance is not an accident, but the result of a long selection work.

To date, hunting is more a hobby than an indispensable factor of survival, therefore hounds are increasingly playing the role of pets. But such content implies compulsory compensation of loads and needs for hunting manifestations.

Methods of education of the pet directly depend on the role prepared for it. If the dog participates in the hunt, it is important to choose the baby from the working parents. However, although he will have high abilities at the level of genetics, specialized training will still be required.

If it is planned to get excellent test results from a pet, then it’s worth abandoning the idea of ​​purchasing a show-class puppy or an occasional breeder on the ad. No champion titles of parents, received at exhibitions for external data, are not confirmation that the dog will become an excellent hunter. Here the most important are the certificates received on tests of working qualities.

See also:   Beagle dogs: a description of the species of the breed and their characteristics

Moreover, continuity is an important aspect. The best are the hunters in at least 3 generations. Naturally, such information can only be given by experienced breeding breeders, they also give a guarantee that the offspring have working skills. As for puppies for whom the role of pets is predestined, in this case everything is simpler: you can not chase the exterior, choosing a pet from the pet class. 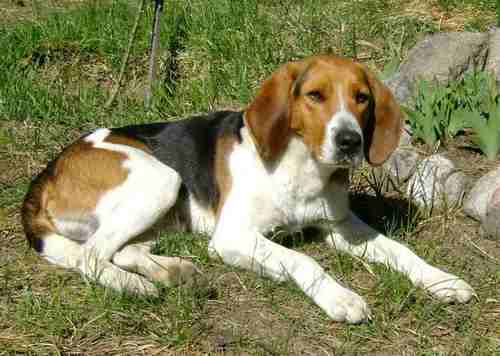 Representatives of this breed are characterized by high activity and playfulness, but control is also required, since excessive mobility in puppyhood can adversely affect the health of the pet. It is important to give the puppy a rest after running or swimming. You need to pay attention to the gait: as soon as the dog has quieted down, then it takes a break.

Having bought a dog of this breed, the family acquires a loyal and loyal pet, and these qualities will be distributed to all members. Hounds have no developed protective qualities, so the dog will not guard the house or house. But if the owners are in danger, he will not stand aside and necessarily intervene.

As for contact or relationship to other pets, then everything is purely individual. Most hounds, like greyhounds, with other animals can develop a good relationship if they grow together. But this applies to other dogs and even cats, but with rodents, ferrets, parrots and other small animals, things are more complicated – they often act as hunting objects.

Choosing a hound as a pet, it is important to understand that she has hunting instincts in her blood, and they will show up during walks. Suppress them completely is not recommended, but it is better to turn in the right direction. Try to keep the pet on a leash in those places where its activity is inappropriate, and in the forest or park zone, lower it from the leash, so that the dog has plenty to do with butterflies, birds, etc. But this is possible only if the dog has passed the training course and has learned the basics of obedience.

To bring up the puppy is necessary from the moment he stepped over the threshold of the house. This applies to the standard commands “Fu!”, “Place”, “Sit” and the rest. But to the fraying proceed much later – from 10-11 months, when the dog will be formed, his bony and muscular corset gets stronger.

To train a Russian hound, it is necessary to master some of the commands:

The ideal period for the fading is late spring, when the forest is dressed in foliage, but the paths are soft. Do not rush with the surge, because if you do this, when the dog has not yet had time to physically develop, the vocal cords and other parts of the body can get damaged. It is important that the dog has already mastered the complex of basic commands.

The Russian hounds have wonderful hunters’ talent, but the owner needs help in uncovering them. The owner should take care that the pet as often as possible participated in the exits and preferably in various natural areas – deciduous and coniferous forests, marshland, fields, felling, etc.

In addition, experienced hunters know that catching hares (whites and hogs) is somewhat different, so it is important to take the dog to where both kinds of game live. The first hunting lessons should not be long-enough 3-4 hours. The ideal teacher of the young is the mother of the offspring, but in this capacity another experienced dog can perform. This is not an obligatory, but desirable condition for learning.

The training of dogs of this breed will not cause difficulties for people with experience. For beginners, the same complexity will arise, but with the right approach, they can cope with the task. On the arm to the trainer will be that dogs of this breed are inclined to please the owner, and also their excellent memory.

In addition, it is important to ensure the correct motivation in the work – the hounds appreciate the joint game or jogging with obstacles than the received yummy. 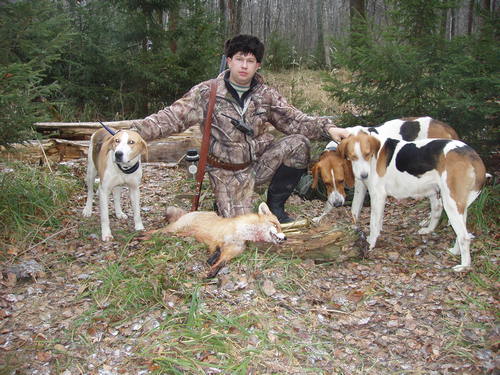 Hunting fans have quite natural doubts: do you need a dog in this business? After all, most people do not manage to go hunting, but feeding, walking and other duties are permanent. In addition, learning a dog is also a difficult business. Moreover, today there are many gadgets that can detect the object of hunting. But experts say: you need a dog for hunting.

And they identify the important reasons for this decision:

Whatever one may say, no gadgets can replace a loyal companion. And the hunt will be as productive as possible and bring more pleasure than the usual “walk” with a gun in search of game.

But hunting with hunting dogs, including hounds, has its own shortcomings:

There are a lot of nuances in the training of hunting, a serious approach is required. But the applied efforts will not be wasted, and joint hunting will bring pleasure to both the owner and the pet, and will strengthen communication between them on the basis of general enthusiasm.

Russian Perga Hound is a breed of dogs that has gone through a long selection period, so in many respects it surpasses other Gonchaks. Such dogs can be planted as pets, but it is recommended for people who lead an active lifestyle. The dog will be infinitely loyal, faithful and will go to the owner anywhere.

One Comment on “Characteristics of the breed Russian Pergamon Hound”