In the 70-ies was bred wire-haired Dachshund breed by crossing the short-haired Dachshund, miniature Pinscher, and certain types of Terriers. And in the 2000s, brought the miniature Wirehaired Dachshund — dwarf and rabbit. Weight of dog up to 3 kg. The small size of this breed is the advantage of an animal can hunt in narrow burrows.

The rabbit Dachshund is not considered a breed but just a variation. Wire-haired Dachshund is considered a rare breed variety, and is no different in intellectual and work plan from the smooth-haired and long-haired breeds.

Wire-haired Dachshund is a new kind of breed of Dachshund. In our country this breed appeared in 1946.

This breed in Russia has not gained popularity among hunters, so workers graduate dogs we have very little, to adopt this breed should be exclusively in nurseries.

These dogs are of several types: rabbit, mini and standard.

They were bred in Germany by crossing the smooth-haired breed of Dachshund and the Terrier, such as the Fox Terrier, Scotch Terrier. The Germans in 1915 divided the breed’s type of coat and then each of them breed on their own.

As well as wire-haired Dachshund can be:

Wire-haired rabbit Dachshund very friendly towards strangers, and has a great hunting instinct and is developed guard skills.

The nature and training

Character the dog wakes up to six months. They are obstinate, prone to escape, as well as a very nice, intelligent, agile with a strong hunting instinct.

With good training, a six-month old puppy, are able to learn all the basic commands and they are developing hunting skills.

Since the breed is prone to escape, she needed to hang an address token. The rabbit Dachshund is very attached to his master and to all members of the family. Loves children and even small pranks, such as, groping for a tail or a big hug, the dog will take over the game and never bite the child, if the growth together.

To strangers the dog is extremely cautious. She becomes indifferent and friendly only after she sees that the owner does not feel discomfort. 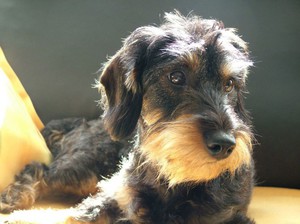 Rabbit wire-haired Dachshund is very active and intelligent dog. The owner should be ready to different the antics of the pet, such as a loss of Slippers, clothes and many other personal accessories. But with the proper education it can be avoided.

Training the dog learns quickly and with ease. For the assimilation of a lesson, rabbit Dachshund quite a few classes. For good physical development wire-haired Dachshund required a daily walk in the fresh air and active play.

The dog does not make to yourself a rude attitude. The increased tone is considered as insult and disrespect. In the wrong education a pet grows selfish and willful.

Acquiring wire-haired Dachshund rabbit, do not forget about the rules of care for her:

Wire-haired rabbit breed has no health problems. But periodic inspection of the eyes, ears, nails and teeth must be carried out. Hair in ears removed as regrowth. Rubbed his eyes with a chamomile decoction or strong tea. Nails shortened with a nail clipper designed for small breeds. As well as the necessary control over the teeth, upon detection of Tartar will be removed in a veterinary clinic.

Pet of age 7 years and older must be tightly controlled loads, in the form of jumping, as it can badly affect the spine.

In the elderly host rabbit dachshunds may face diseases such as:

The dog is prone to obesity. With overeating the pet have problems with joints and is a violation of the exchange process. 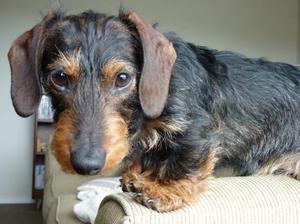 A dog breed rabbit wire-haired Dachshund, may be contained on dry food and natural.

Dry food should correspond to the level of first-class or premium class.

When feeding a natural diet need to pay attention to products containing large amounts of calcium and the diet should be: meat, cheese, eggs, fish, cereals, vegetables and fruits.

If four-legged friend is sold for hunting or walking through the exhibitions, you must buy a puppy exclusively in nurseries. The nursery provides a guarantee of thoroughbred. The price depends on the pedigree, on average, ranges from 20 to 60 thousand.

Tips for the owner of the rabbit dachshunds

The owners of this dog should know a few important points about caring for the breed: