A team of scientists has identified a single molecule that could be a key in controlling invasive sea lampreys.

Researchers from Michigan State University, the University of Minnesota and Western Michigan University have homed in on a fatty molecule that directs the destructive eels’ migration. The results, published in the current issue of PNAS, could lead to better ways to control sea lampreys. 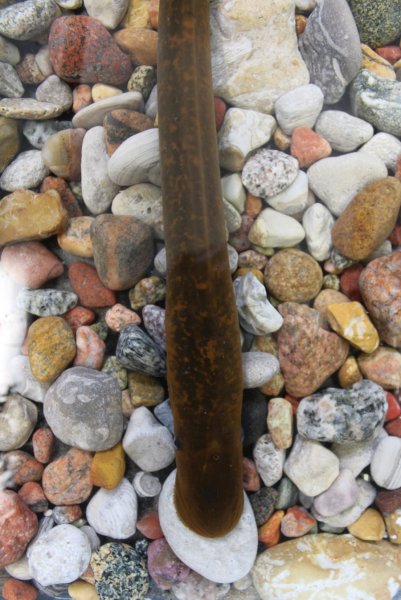 “We’ve found a pheromone, a fatty acid derivative, that’s released by larval sea lamprey and guides migratory adults to spawning grounds,” said Weiming Li, MSU professor of fisheries and wildlife and co-lead author of the study. “Because the pheromone bridges two distinct life stages and transmits through two different habitats, it holds a potential to disrupt adult sea lamprey as they try to reproduce.”

Scientists have suspected that such an odorant existed for decades, but the identity of such odorants have remained elusive.

To better understand the importance of this finding, here’s a little background on sea lampreys and their migration patterns. The invasive species infiltrated the upper Great Lakes from the Atlantic Ocean in the 1920s through shipping canals. They feed by attaching themselves to other fish, such as salmon and trout. One sea lamprey can kill more than 40 pounds of fish, and the U.S. and Canadian governments spend approximately $20 million annually to control them in the Great Lakes.

To make the new discovery, the team of scientists relied on collection of tens of thousands of larval sea lampreys by the U.S. Fish and Wildlife Service, Fisheries and Ocean Canada, and U.S. Geological Survey. Scientists then began the rigorous process of extracting the pheromones for identification and testing them in streams.

The newly identified pheromone guides migratory adults to swim upstream to spawning grounds. Once on the spawning ground, the males release the “scents of love” to attract females. The molecule synthesized, according to the identified pheromone, was potently stimulatory for the nose of the adults, and, at less than 0.1 parts per trillion, induced preference of migratory adults in stream selection, Li added.

“The potential for application in sea lamprey control is quite good, though we still have some work to do,” Li said. “For instance, as we do not yet know how well we can use this pheromone to outcompete or disrupt all the other signals a sea lamprey uses to spawn.”

2 Comments on “Pinpointing a molecule for sea lamprey control”