After a long hour, the fish was closer to the bank. Anderson went into deeper water with his net, hoping to scoop the fish. He continued, “I saw it roll and I saw the tail fan. I was in disbelief. I put the net under the fish, and it dropped its head and bent the net.” – Tennessee Department Of Wildlife

It was 9:00 p.m. and he invited friends to fish with him. No one accepted. Now, everyone wished they’d been there to see the 103-pound blue catfish he reeled in alone.

Around 11:45 p.m., he watched the pole as it was torn from its stronghold. He stated, “It didn’t bump or tug, but literally was jerked out. I grabbed it, leaned back and let the drag out.”

Knowing he had something big, he went on Facebook Live. 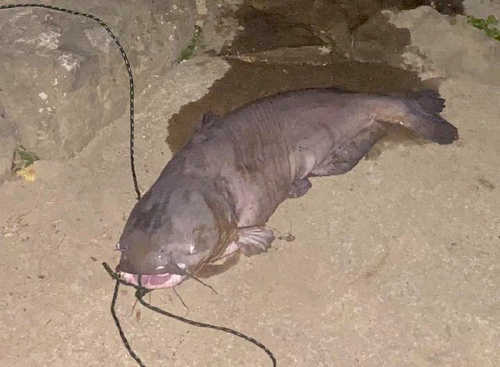 It’s a Saturday night in June, and the sun is just making its way down. You’re at home on the couch, in the garage, or wherever your hangout might be.

You see the message an immediately begin to envision the adventure – you navigate the route, create a gear list, factor in the weather, and of course, picture yourself holding up a big ass fish.

For whatever reason, you reply with something along the lines of ‘‘Not tonight but crush them” with a sincere sense of fomo.

Something is holding you back. It could be an obligation in the morning. Maybe it’s family-related. It might also be because you’re already comfortable and warm on the couch, and you don’t feel like going.

Whatever the reason is, this story is to convince you otherwise, a friendly reminder that you should always be willing to say ‘Yes’ to that opportunity to go fishing.

That’s it! Get busy fishing everybody, you never know what you might see. Tight lines!