Half-day sit with a fishing rod and the fish aren’t biting? This unfortunate situation is to avoid easy – enough to acquire an aquarium. Observing the behavior of a silent pet, you will determine when to go fishing, and when it is better to wait.

How the method works?

On the behavior of fish is affected by many physical factors: atmospheric pressure, cloud cover, phase of the moon. Hence the technique – follow the activity of the inhabitants of the aquarium, and draw conclusions.

If they instantly rise to the thrown in the water bread crumbs and cheerfully chased around the aquarium, prepare the tackle without a trophy will not return. But if, in spite of bright sun, fish passively lay on the bottom and almost without moving their fins? This means that the living sensitive barometers caught yet invisible weather changes and a sign – nibble today. 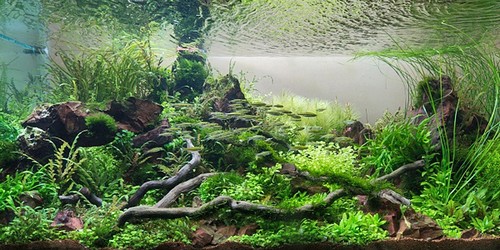 Keep in mind that not all inhabitants of freshwater bodies is active only in clear weather. For example, a char behaves exactly the opposite. On Sunny days this is a predatory fish of the salmon family is resting on the bottom of the aquarium or pond. If the char on the eyes comes to life, soon the sky will cloud cloud.

In addition, the aquarium inhabitants, you can test different baits and feeding. For example, when omnivorous fish like carp refuse of plant foods, offer them a worm. If a treat will cause interest, on the fishing instead of the usual breadcrumbs, use worms.

Any river fish you can keep in the aquarium?

The main contenders for the role of domestic predictors of fish, lake carp, are unpretentious to environmental conditions. In addition to carp, in home aquariums holding bleak, Krasnoperov, ruffe, roach, roach. There feel good perch. And if the perches to plant minnows and golovliov, you will find a fascinating sight – hunting perches.

The role of suitable barometers are also common aquarium fish. Not only guppies or swordtails, and a loach, catfish and fish-peacocks – astronotus.

However, the real fishermen messing with the fish tanks, usually not very interesting. So then again back to the river or lake fish, placed in the home aquarium. Last on the agenda – the creation of a comfortable environment for such an atypical objects aquarium.

Let’s be honest – river and lake fish no matter adapted to life in the confined space of the aquarium. So new Pets are not decayed in the first days, will have to try.

First of all, you need the right fish to catch. To less hurt future pet, for fishing use beardless hook. Among the total catch select the smallest fish caught over the edge of the lip, the rest may not survive.

Fish placed in the aquarium volume of at least 100 liters. It is filled with water from the pond where there was fish. Given the large volume of treated water, choose a powerful filtration system with a compressor for air supply. In the aquarium if possible, put the seaweed, place on the bottom of rocks or driftwood.

Summer care for regular water cooling, or even live goldfish at risk of becoming ear. With this purpose, it is recommended to use special coolers, but at worst will fit a plastic bottle with ice.

Feed the fish any fish food. Also on the menu you can include bloodworms, earthworms, pieces of meat, vegetable food. Do not get carried away frequent feeding – 1 times a day, otherwise the water quickly becomes cloudy.

And finally, a few words about caring for the habitat of your Pets. Everything is traditional: from time to time clean the aquarium weekly and replace part of the water (about 20% of the total).