Sometimes it even seems that fresh and rosy okoshki hunt purely for sport. At least that comes to mind when you see the attacking whale, from the mouth of which is still sticking out of someone’s tail. Similar I have seen on zhivcova fishing for big perch. Some forest lakes horbachi to 2-2,5 kg take only on their smaller counterparts, ignoring all or almost all artificial lures. Biting them quite often on the hot and muggy season, which is called “gluconate”. 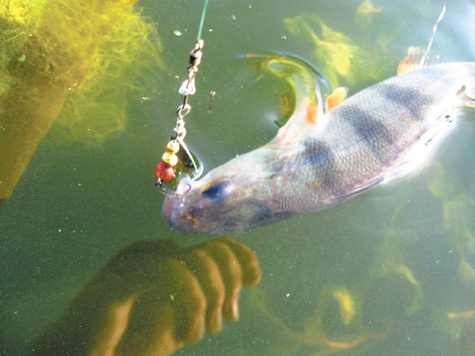 Early sorami, late evenings and short nights come heavy Humpbacks on sandy shallows where hammered pine poles with flyers-Gerlich. Often, the depth of such space is just the meter, but if there is green at least a bunch of hornwort or water lilies, perch boldly enough okunikko-bait. And in the reeds grasp full-grown humpback can be followed on a half-meter depth. Checked… When gutting these striped predators, you often find undigested another perch. Here it is, the greed, and maybe a passion?..

On the fins, eyes and cichocki

On the same forest peat lakes choice of nozzles can often cause shock, at least, exalted ladies, if they still survived. But imagine that the fisherman forgot the worms…well, it so happened that I forgot the worms, and time, as already mentioned, the perches, and the attachments are not. Also, we must remember that when it begins to take a large predator, the whole small fish prefers not to catch the eye of krupnoyacheistoy Massira. So, the potential biting live bait at this time is always worse. Know it and winter shchukarev-garliclike able to zhor pike for bait to sell his soul, or at least a bottle of…

So even to the naked ear hear gurgles something and somewhere in the reeds, and then suddenly falls already ringing. many frightened tails. Themselves predators, but flee from the hunchback his friend-monster is literally only noise is… what to catch live bait? These lakes are sometimes almost deserted. A few worms “for Christ’s sake” no one to ask.

Because catching perch zivcovic expected on a white jig with a tail of a worm, the tackle ready. Trying to conduct along a coast drift wood mormyshka without a nozzle, with short jerks and stops, but the bass does not react to a naked snag. Not fall yet… So… Someone burns the neck. But it’s you that I need… This is a small fly, wont quietly and silently stick to the wet body and sting at the same time quite Mature. I put on the hook “osinki” and now more actively rinse the snag along driftwood and coastal grass. But the bites did not occur. It is likely that this Creek is simply no bass. Here it is necessary to clarify that many megdonia peat lakes have low shores, often consisting of turf lying on the interlacing of roots and herbs. Under these low shores of standing water, and often the lake is still continuing under the Bank five meters. In such a shady shelter and a perch, often black and almost purple, which stripes will not see. Nearby, on the sand and in the water-Lily can hold quite bright and striped. But all these perch in the heat, stick to the coastline, of course, on the shady side.

As profitable to fish on these lakes perch, I was shown by local residents. They came here ten miles away from the nearest village on the bikes to catch perch. While I’m sad and wasted was waving from the boat long “telescope”, a blond boy foot twig dragged from under the shore weighty “Congolese”. However, he maliciously and the white rocks in the shade of a pine, while I was perspiring in the hot sun and in a hot boat. But I still then he was fishing, which aroused the respect of the local Gavroche. The kid did everything right: he carefully went up the Bank and threw a worm at all occurring bays, particularly where fresh lay a fallen tree or snag Prel. If perch was standing here, the little fisherman pulled almost all of them.

Fishing for carp (carp) and what to fish

But his fishing, as the chassis had been passive. He just threw a hook with a worm and waited, and when cork float whisks into the water. I, armed with the basic principle of fishing, added to this “method,” a small white jig and wiring the nozzle elements of the game as possible with a float. When a jig with a worm starts to move and swim some of the way, perches were seized twice more exciting. The game dummy began to attract not only the “nigger” animals living near the shore, but “the whites” neighbors peeking out of the egg capsules and hornwort. Naturally, the fish began to come across more.

But back to our perch today. So, the fly on the hook of the jig. But bass are not a Chub or IDE. Interested in whether it is predator, insect Raduzhnoye? Fit, barely and not breathing, to the next Creek and throw a jig with a nozzle under the old pine tree lying across the Creek. Foam Poplavok with a bright red tip twitched and froze. Silence… no One was interested in wet and sluggish insect. But as I began to jig along the beams, from the bottom hit sharply and hovered has a nice weight in the hand. There! First… But this is clearly not the bait. More palms. Adjusting what was left from the fly, throw the gear back to the log and immediately begin the transaction. The bite was not long in coming. Caught perch, fit, albeit loosely, on live bait. But the attachments I have left. This second okunishi ripped off the last rags, who had been slanem… And for some reason, when necessary, these bloodsuckers was not on the neck or arms, generally within reach of a heavy slap. Crafty critters, like found out about its usefulness and flew to frivolous tourists, sparkling on the beach grudingly, legs and fillets from under the strings…

And the thought came heavy and bloodthirsty. Ladies can stop reading. I’m hooked on the jig hook eye at the first perch. He was already drowning. (This is for the ladies and animal advocates). Pulled out and threw to the same log. Bass even angrier peck. Eyes to order proved stronger the fly, but when worn out and he went to the second nozzle. But it all ends. Not to take me eyes of a potential bait fish, meaning fishing is lost. From the classics of fishing literature I, of course, knew that the fish in those simpler times caught on everything, including pieces of fish, fins, guts. Cutting I do not, but the lucky fin pinned. Bite striped!.. And cichocki perches also fun takes, a cannibal! Since I know that the forest lakes head to find no problem. Would be a handy trick, a five-foot piece of twine and a twig. And float in five minutes to make from a piece of pine bark…

It happens that in the same period, the perch began to take on a variety of spinner baits and soft lures. As already mentioned, the Humpbacks per kilo, they are shunned and prefer living their “brothers of others,” but perch weighing 300-400 grams are frequent in the catches of anglers. Although there are differences in ulovistost on “turntables” and “rubber”. Often the latter prevail, at least I had notice a sharp difference in the bite on twisters and even the most advanced zero “turntables”. The already mentioned forest lakes maidannyk some nondescript Ripper or small fibroblastic can cause unhealthy excitement in the local barbed and inexperienced “underwater friends”… But as they say, no evil without good, and Vice versa. A countless number of bites caused by silicone fish, true is often only half. Gambling perch catching faux, poke them football, rip “tails”, but sit on the hook for much less than, for example, for a Threesome “turntables”. Of course, you can leave it as is, since this fishing is very hazardous and often amused laugh. But if it is possible, the number of severing tails and empty movements can be reduced. To do this, instead of a jig head is better applied load “Cheburashka”. The loop, which will be attached to the winding ring with a hook, it is necessary to deploy the pliers in a horizontal plane. In the bait making the hole where you can then insert the shank and through double crown ring to attach to the load. The finished decoy will be more profitable to differ from the usual jig head his “zatsepistost”. Double still…

But the most simple and fun fishing on the forest lakes consists of primitive thought, casting silicone lures light fishing rod. Casts are made deaf by the head in the usual bait without a float, the whole length of the line, with subsequent posting on and along the sides. The transaction can be speed, that is lowering to the bottom and the instep and, sometimes, monotonous feed of the lure in water causes the predators a strange gaiety and reckless gambling activities, which has already been discussed in the beginning… And then a fishing to inspire the most inveterate homebody, a nerd of nerds. Moreover, it is not required special skill and experience.

This catch I discovered early on in “jig-revolution”. One of fishings, when the hand was only the indomitable Soviet spinning reel “Neva”, regularly catching pike, and in the box with the baits already appeared the first vibrohvosta, I just tied the fishing line to the hook is the easiest jig and pushed away from the shore a heavy raft. With them, heavy and comfortable rafts-salokya, we caught then on the lakes. And on the small artificial fish began to bite greedily naive forest perch.