The tackle is simple, but, nevertheless, working sometimes “productive” 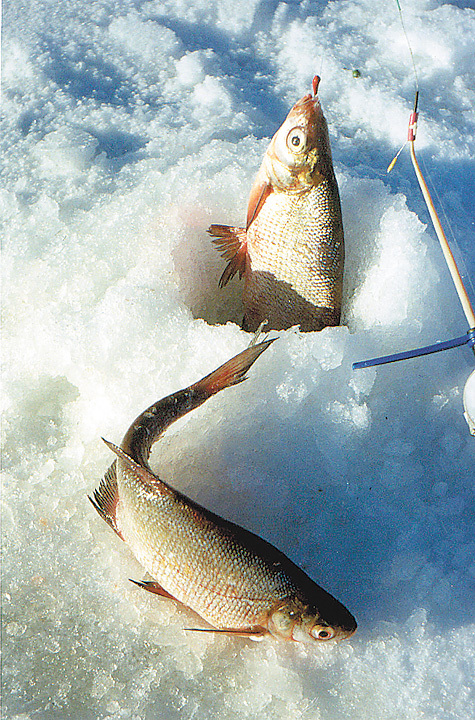 When the season can already be called toroljem, and snow covered with a transparent glass rivers and lakes begin to have more confidence to take bream, CONV-white-eyed and Zope. Last naughty in Kleve, but if you get to a place and time, the catch can be quite significant. Not necessarily that will take it in the morning, mainly for fishing on the ice is the rule.

Zopa can absolutely ignore the attachment in the first half of the day, but then, as if recovering himself from a trance, begins to feed greedily and bend nod Ugolnikov over and over again almost without respite. Bream classic takes better in the morning, with the dignity of the respectable fish – not often, avoiding places where the ice sboren full of holes and hit the top sheaves of daylight. So he is careful and sensitive to sounds, even if the place is deep.


Happens to be strong for not just allows you to tease big white fish plays a jig. And she’s a big fish in this place is present, though not in the number of summer or autumn flocks. Then can gain the winter ground. The tackle is simple, but, nevertheless, working sometimes “productive”.

For donkey like spinning, but I use the set with a rather large open coil, brake clip and cork handle. Usually such udilnika used for trolling. The advantage of spinning is that a large open coil allows you to put a rather thick line corresponding to the ranks Lesovoy donkey with a heavy sinker, and allows you to quickly pit and podmotat fishing line at great depths. Big fish often holds deep strong currents of the fairway slopes to the hole, “likes” furrow-proranami in sandy or rocky spits. Sometimes the most efficient could be the old shore of the flooded riverbed of the Volga, or any other great river, which became a reservoir. We only need to find off, or the depth gauge drop with a “coast” track. However, in our age of problems with measurements of the depths and even the search for fish has already gone. This is the sounders.

A nod should be set quite hard, within reasonable limits, of course. The main fishing line – 0,18-0,2 mm, because in addition to the weight of the fish pull line and sinker. From him moving, you can put on the swivel relative to the long undergrowth with leashes. Length of undergrowth depends on the strength of the current, but the optimum is 50-60cm. The line can be loaded into a small gruselle or put on the end of the lead jig. Above the sinker tied with a short leash with a hook or a colored polystyrene light jig. As a variant – glowing.

The tackle can be initially other. At the end of the main fishing line is heavy lead or tungsten jig, as above, tied with two-foot or longer leash with the above mentioned light colored jig. Hook-heavy mormyshkas can put a bunch of worms, carefully preserved in a box with earth in the fall or purchased in the store. The upper jig let the red lobe of fresh bloodworm involving thin band of scarlet. So the larvae will keep longer durability and attractive for fish color.

Bottom fishing tactics with ice unsophisticated. It is only necessary to follow closely the rattling on for nod and from time to time to make long action, feeding the jig with the nozzle on and letting go.

Feeder with ground pea porridge, roasted sunflower seeds, breadcrumbs, and cake and adding custom bait can be lowered into a hole drilled upstream. Following the analogy with summer fishing, the feeder can also be hung directly on the main line, but better than under the sliding sinker so it won’t be lifted over.

Frosty. Degrees fifteen in the morning. Under a high Bank, on the slopes of which lies the small village, the man sits thirty fidgets who frosty morning on the ice more comfortable chairs around the TV. Crawl borax in the ice, sparkle smiles under the frosty mustache, someone is already heated, substantially pushing a neighbor in the shoulder. He says the same. Don’t bite.

Do not bite and I have, therefore, already tired to look for this elusive CONV-white-eyed, sitting in the tent and drinking tea. Purrs receiver, in the tent, warmed by the sun, warm and somehow cozy kitchen.

Meanwhile, past noon. Move closer to the shore, more out of stubbornness and the desire to have something to do. Sit capital, giving a vow never to run, not to fuss in vain. Put the Donk, and in the next hole down heavy “uralka” with such a lobe of scarlet in the sun bloodworms that only you wonder, what more do you want fish?.. Above the jig – leash and also with a jig, but made of white polystyrene. Peeped sinful, one lucky angler.

Organize tackle, shivering, we climb into the tent. Painfully cracking down frost in combination with the wind pulling along the Volga. In the tent immediately creates a microclimate, and again comfortably in a small home.

A tuk-tuk!.. Updated-nods on both rods already rattled from the sudden simultaneous bites, not knowing what tackle to grab the bait immediately with both hands and throwing one rod, heavy vyvazhivaete fish on the other. The consciousness of the passing records that when cutting the left arm also felt heavy. It is the case, maybe not go fish all the same cut. The one vyvazhivaete, and passed safely, though one feels that not a trifle. Smooth elastic tremors of the fish are reminded that the outcome of the struggle was not yet clear, despite the fact that udilnika I 0,175. In the hole Zopa raised such a fuss that, afraid to cut the line on the edge of the hole, let the fish “walk”. The second time Sopa is on the ice. Good!.. Not a bream, of course: more elongated, more flat, pop-eyed, but beautiful fish. One word – Belle!..

Throwing it into the drawer and pushing the line rings lying on the ice, clutching his left rod. Then made a blunder!.. The tackle had to be cut. While vivarelli CONV, rings, fishing line turned into a dense “beard”. Remove the fish slightly less than the first, throw the “beard” along with a fishing rod in the box and continue to fish with one fishing rod. And useless it would be to catch the two – bite followed one after another. (Later experience how fickle and unpredictable the bite SOPs. You could spend half a day without a single bite, and then an hour Abryutina like for the whole day. And Vice versa.).

The fish was measuring in one and a half mittens and more. It was a lot of incorrect bites. Zatryasetsya nod as if in fever, and strike – empty. Although takes, apparently, a big fish. The trifle did not come across.

The time was already nearing four o’clock, soon left, but the box was filled with eyes. The excitement, fresh air, clear given the sun-drenched Volga – that they simple joy, which the soul is kinder and cleaner.

Walk along the trail. The soul is easy, and the box, dry slapping tails, waddles SOP. And it is not so tricky, just fish has its own habits differ from the habits encroaching on her anglers.