The last month of summer, in my opinion, the most appropriate time for hunting with a spinning rod for striped predator. But here’s the thing. When you ask a seasoned angler, a lot whether on account of his dignified perch, he shrugs or pretends to not hear the question. 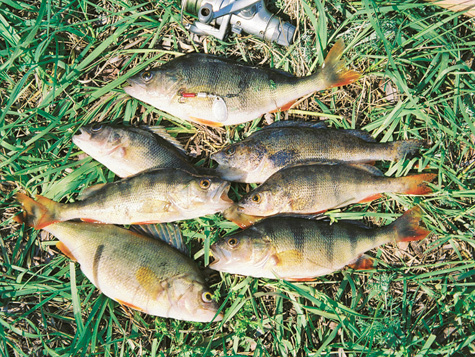 Indeed, not all of us can be proud of record-breaking trophies, whose weight was at least close to two pounds. Large bass in our day — a rarity, since we do not allow him to grow to the designated nature of the condition.

For each season the behavior of the striped robber will be different and that, of course, we have to consider when spinning. Large individuals usually hunt alone, sometimes smaller gather in numerous flocks, giving no quarter to the fish stuff. When poor forage base of the pond perch, and pike, pronounced cannibals, consuming its own young. And if you get into a body of water, fishing can be fantastic. In particular, I had to catch a very hungry and greedy predator in some small ilmenite, located in the Volga Delta. Usually catch a good bass — it’s not as simple as it may seem at first glance.

At the time, I “shoveled” a lot of material on the biology of perch — we have the most ubiquitous predator, including PhD theses, which remained accessible only to a narrow circle of scientists-ichthyologists. Anglers, devoid of scientific information, a lot to lose in terms of acquisition of skill, and especially when spinning. Once on shore I chatted with a young spinner. It turned out that fishing he’s doing five years. Well equipped and enjoys a rather impressive collection of modern lures by brand lures to plastic fish crankbaits, my companion, however, had a vague idea about the biology of the perch, who that day decided to hunt.

Where to find perch?

Without the knowledge of the behavior of perch in the open water season, as well as his habits within a day the chances of a successful catch will be small, except for those moments when you purely by chance discover a fattening flock.

What are these features? In late summer, after the heat subsides, perch noticeable aktiviziruyutsya and begin to gather in numerous flocks. At this time, the bass may migrate across the reservoir in search of aggregations of forage fish and other animals. Often it can be found in the coastal snags, where it is appropriate to apply the uncoupled bait. In hot weather, note that in the standing and maloprotochnyh reservoirs the behavior of this predator is largely determined by thermoclines occurs when stratification of the water on cold and very warm. In this situation, the grouper selects the layer of water, where he feels more comfortable. Find the layer you can use a thermometer or depth sounder. But most often a school of bass can be detected, making the transaction of bait in different levels. As a rule, coastal areas where there are snags and aquatic plants, the mouth of rivers and streams, and remote from the shores, shallow waters, mounds and similar places. Here it is necessary to look at the bait, depending on the transparency and luminosity of water. And, of course, given the prey that he currently eats.

The pike fishing on spinning in may

It’s a good start to learn how to read a river, reservoir, lake or other body of water where you are going to catch striped predator. Take, for example, extensive reservoir. The most venturesome and profitable here I think fishing for bass on the “pot”. Identify them in most cases, the accumulation of gulls circling over the water. It should be noted that the bleak main food more or less big perch — is constantly in motion. Perch block flock bleak from different sides and from the bottom, “forcing” the fish to the water surface where the RAID enters the final stage — the gagging of victims.

In the rivers I try to look for the striped predator most often in calm waters and in the shallow places, especially where there are sunken snags and fallen trees, as well as around headlands and in weedy bays.

In small ponds — oxbow lakes, ponds, quarries — boy perch I often watched in the early morning hours. Local perch here also use of battue hunting for fry, pressing it sometimes to the very water’s edge. I noticed the following feature: in the places frequented by anglers, the bass are acting very secretive, almost never coming to the surface and hunting for fish breeze in the bottom and middle layers of water. Where it is not disturbed anglers and poachers, he claims to be characteristic of the fight during the hunt.

To get from perch fun and feel confident, the first thing you need to have is good gear. Carbon fiber rod, soft enough, with the length of 2.5–3 mplyus spinning reel light class for up to 100-150 m fishing line with a diameter of 0,20–0,22 mm — best option for most conditions. Of course, in a purely perch areas you can use thinner fishing line, which greatly increases the chances of success.

At the same time we should not forget that a number of bass often coexist with larger predators: pike, perch, Chub. If you suspect toothy pike, which readily enough perches bait, my advice is do not be lazy to put a thin metal leash. Almost every time, have not yet discovered a cluster of the striped predator, I catch with a metal leash. Time and again such tactics are justified, especially in reservoirs, where in addition to pike and perch there is no other predators. But after the discovery of the taker Okuneva pack the leash should be replaced — no matter how you join: the method of “loop the loop” or using the clasp (clasps).

As for perch lures, their great variety. But you have to start with the obligatory gentlemen’s set, which is based on small and medium-sized vibrating and rotating spinners, twisters, vibrohvosta, floating and sinking crankbaits, plastic worms, fish foam, mini-jigs. In addition, the set should always be uncoupled bait and combined in a tandem version.

As far as I noticed, many anglers start fishing in the vending area with the use of versalock. This is one of the strongest stereotypes, since these spinners the most aprobirovany our anglers are regularly exposed to articles in periodicals. At the time of posting wersalki from the angler does not require any special manipulation of the tackle, as the spinner works by itself so bad. With okunevy crank, for example, things are different. In the posting process you will have to make his stately stroll in the upper layers of water or “pretending” to be a wounded fish, representing easy prey for a predator. And it requires much more skill of the spinner, and therefore, fishing is becoming more like art.

If the bass goes out into the shallow water, catching it is not so difficult as at depth. But there are cases when in the beginning of fishing comes through every 5-10 casts to change the bait, varying their size and color.

There are several major types of transaction. Such as uniform, speed, demolition, vertical. I should note that it is often necessary to consider the fishing conditions and the object to which you are hunting with a spinning rod. One thing Chub and quite another perch. The approach to fishing must be appropriate.

Well, what a jerk posting? One early morning on the river Karabalyk (lower Volga) I fished on wersalki backwater. And after almost every release of the bait to the shore it was accompanied by a rather large perch. When he spun every time I went into a dark depth. I decided that in this place there is a pack of solid perches. Put the spinner No. 2, equipped with a red tail. Make uniform the wiring. Bass goes for lure, but not taking. Following the throw was effective. Taking the lure at half depth when she was already approaching the shore, I intuitively made a few sharp jerks, without stopping transaction. Strike! Perch on the tee. And things went smoothly. The fishing I was very pleased.

Jerk the wiring should not be confused with intermittent, when the bait is suspended and after a few seconds it is already another horizon of water. Later I realized that the jerk posting is activates to grasp not only bass, but also other predators when they hunt in the upper layers of water or in half-waters.

In autumn days the bass behaves, perhaps the most active, with the exception of periods of prolonged rain and sudden cold snaps. Practice shows that the predator can catch up to the fast ice, and the closer to winter, the greater the depth, where the water is cooled is not as dramatic as in the shallows. At this time you need bait for deep-sea transactions.