What sometimes bizarre take nature’s creations! Well, in the tropics or the South seas, where life is boiling, and you can meet some really incredible organisms, but even here, in the middle lane, there are very strange creatures. The photo looks like a Cicada (and, in fact. is her distant relative) insect called gorbatka horned (or gorbatka ordinary, lat. Centrotus cornutus), which is also called bouska. Just look at her appearance below the origin of these names became clear. On the back she has a peculiar hump with three spines — the two cleats on the edges, and the third is directed backwards, the longest horn, something resembling a suitcase handle for carrying. Despite the unusual appearance, these insects are rather monotonous with larval age they sit on the plants, and, stabbing their proboscis and drink the juice like ordinary aphids or cicadas. 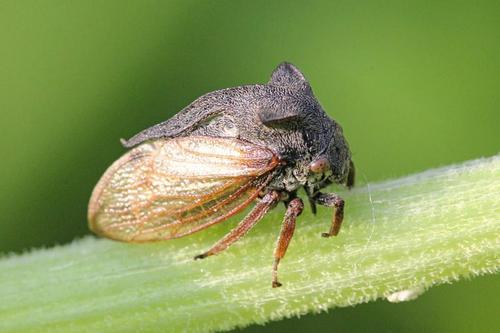 Garbacki, or boguski (lat. Membracidae) is a family of insects, characterized by a strongly developed pronotum, resembling the hump with various outgrowths. Damselflies are insects with unusual growths on the breast (combs, spikes, hooks), camouflage them in the plants. Medium size, pronotum with protruding back bone, a face with protruding pineal down frontoclypeal. Growths represent vyrozhdennoi, heavily modified third pair of wings. Larvae (nymphs) along with imago live openly on plants and suck their juices. Pending on buds, leaves, roots and under the bark of the mordellid beetle eggs overwinter. 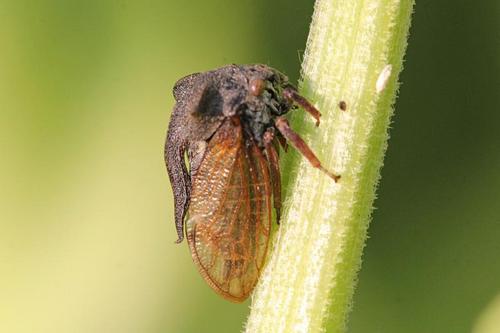 Gorbatka horned — the most common-Ola in Central Russia and Europe. More modest than its bright tropical relatives. Reaches a length of only 7-9 mm. Its pronotum has three horns, by which garbacki and got its name. Two of them, not very large, similar to the spikes stick out to the sides. They are clearly visible from the top. The third horn the longest. It is directed along the body back, but does not reach the end of the abdomen garbacki. Body length 7-9. 6 mm. Adults are black on their body are yellowish surrounding hairs; in the females the edges of the side and rear appendages of the pronotum are brown. Elytra and veins transparent. 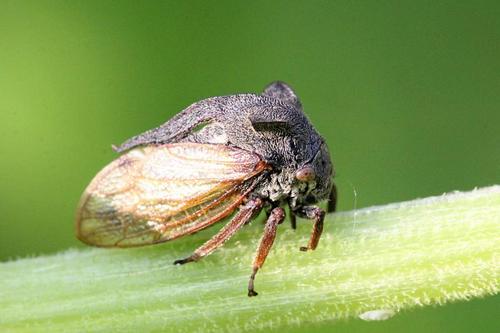 Found from July to August, blackberries, raspberries, and deciduous trees. Live in the glades, on krupnomerov throughfall, forest roads and in the woods. Most of the time these insects sit on the stems of these plants and their proboscis to suck juice. Nymphs in a period of growth don’t usually leave the host plants, which include lactofen, Thistle, thistles and nettles. Adults spend their time at the top of herbaceous plants and shrubs, but are more common on young trees, such as poplar, oak, plum and others.