By the way she resists, and other extraordinary qualities, characteristics and properties it can safely be called a miracle. Of particular interest to anglers this fish is also because she is not only extremely strong but also active in Kleve. 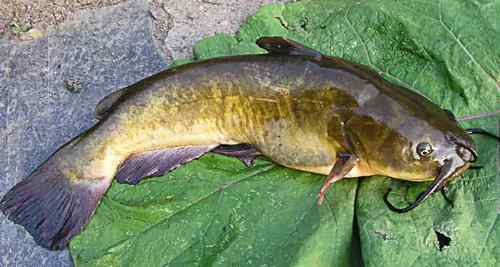 Is a channel catfish, Ictalurus Punctatus, or spotted (feline soma).

Until recently, this wonderful fish was purely American. The natural habitat of channel catfish East and Central regions of the U.S., especially the basin of the Mississippi. Relative simplicity, high adaptive ability, excellent food quality made it a valuable object of commercial fisheries and recreational fishing. This in turn contributed to its wide dissemination, not only throughout the US but also in European countries.

Channel catfish were successfully acclimatized in our country. It is bred in the ponds of the Krasnodar territory, it is promising for cultivation in cages and basins for the waste water power plant and nuclear power plant where his “harvest” up to 100 kilograms per square meter of pond.

Ordinary catfish channel catfish are a little similar, except that the mustache (four pairs) Yes, the habit of spawning in the nests, which he is building. But in fact the channel catfish look similar to trout, the same as swiftness and grace. Body slender, elongate, slightly laterally compressed, without scales. The caudal fin is deeply forked. The head is of moderate length. In front of the dorsal and pectoral fins are rigid, sharp spines. It is especially necessary to remember the fishermen, as the prick of these thorns are poisonous, and the wound it painful.
Color of back olive-brown or gray-blue, and there are albinos. Channel catfish is a fairly large species among the felids kgs. It weighs 7-8 kg, but sometimes there are very large individual. Known cases capture instances of up to 40 kg (in Canada, for example). The fish can be considered omnivorous: juveniles feed on zooplankton, more adults – shellfish, crustaceans, caddisflies, etc., large fish. Peck catfish can all day and do anything: meat, shellfish and fish guts and liver, worms, fry, tadpoles and frogs, even … soap!

Females spawn once a year, late spring or summer when the temperature is 23-30 degrees. At the end of the spawning of offspring cared for by the male. He takes care of the eggs – the Gill covers as if it aeronwy protects. This shows the kind of aggressiveness that can cause injury to the female if she approaches it.

Fishing for carp on the float rod

Channel catfish can be caught almost all year round. Summer fishing rod with rings and coil better equip the fishing line diameter of 0.4 mm, a sliding float, a solid hook. Because you often have to make long casts, then as the sinkers used an olive, placing it above the hook for 40 cm. The nozzle may, especially in the current, dragged along the bottom, thereby attracting fish. At poklevke the float instantly dives under water, and then have to reel it in. If you were late with cutting, take your time pull the tackle for the updates tips: it is very possible that the nozzle is left on the hook, and after the first followed by a second bite.

Winter fishing equip like summer, but the alerter bite often put a nod, perhaps from a thin elastic wire. If the nod finely and slightly “rattles”, most likely, the nozzle pulls a trifle, but if he made a low “bow”, it is necessary to strike sharply.

Fishing is most successful when the sinker lies on the bottom, and just above him, attached the leash with a hook and nozzle. For the depth of about ten meters of the sinker should be with a weight of 15-18 grams. This snap-in is good because the sinker doesn’t scare away fish, and a nozzle at the bottom moves slightly over.

You can catch channel catfish and trout line, as do anglers in the United States, and in Russia. For casting use a fishing rod with spinning reel. Higher weights strengthen leashes (usually two) with hooks and attachment. Bite alarm may be a bell or other device.

Channel catfish meat is tender and very tasty. Especially this fish is good smoked (some foodies find it even more delicious eel), but it can also be boiled, fried, jellied to do. Bones, except the skeleton of a fish there.

I think that channel catfish deserves the attention of farmers as the object of acclimatization and breeding. Of course, stocking of reservoirs is necessary in the prescribed manner.