In all reservoirs, the fish ceased to reproduce and the number was so small that close to the time when the fish will disappear completely. Ichthyologists have quietly watched the disaster of the fish fauna, convinced that they are not implicated in this disaster. But it’s not. Ichthyologists in all the fish ponds was inhabited by Amur carp, which have the ability to multiply rapidly and to gain marketable weight.

We now know that rapid breeding of carp, together with other factors, is in exile all of the fish from their native territories, which formed places for spawning and growth of juvenile carp. 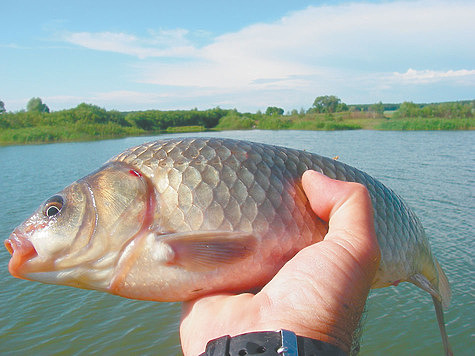 Quick weight carp that have come to a different location occurs when the supply of eggs and fry of fishes like natives, which leads to the cessation of reproduction and, consequently, to the complete disappearance.

Probably to hide these harmful qualities Amur carp, in the interests of their sale, invented the version that they are silver carp, do not have their males, and their eggs are fertilized the male of other species. This version is similar to a spicy joke for April 1, was seen by scientists-ichthyologists on faith without a doubt and of proof as valid.

For many years these contrived bestuzhevyh carp that live only on paper and in the mind of scientists, studying serious people, making scientific discoveries and writing of the thesis. This bogus science is harmful not only real science but also damage to nature and economy of the country, distracts attention from the real scientists of the Amur carp, which are the reason for the termination of reproduction of all fish and their disappearance.

Fictitious bestuzhevyh silver carp is proved by the fact that they cannot be the representatives of the Amur carp, which besanzoni carp are not and cannot be a silver carp, although they look like them.

Information about the life of Amur carp obtained by conducting observations and experiments. Some facts needed for the article below.

In all reservoirs, large and small, formed in river flood plains, dams on small rivers, waste pits, swamps and other water formations live Amur carp, while in populations with different stages of development. In these reservoirs, and not in the sea or a large reservoir, it is convenient to study the life of the carp, because they are collected in one place carp of all ages, from hatchlings to adult.

To explore carp should choose a pond also carp no other fish, adult carp consist of females, and near the shore swim a bevy of young crucians.

The behavior of the goldfish after leaving their places of birth were observed in the Lower Volga in the upper part of the Volga-Akhtuba floodplain. It turned out that Amur carp are hermaphrodites, and they change their gender several times during their lives. Carp are born males and when they grow up, they become females, producing spawning during this time and before leaving for other areas at the age of 7-10 years.

On the territory of the other egg-bearing females do not eat ordinary food, and during spawning of fish-natives eat their eggs and fry. After spawning all fish carp, gathering in large masses, do not search for food, but without movement until the next spring.

These egg-bearing females, scientists accept as bestuzhevyh silver carp, which is a mistake.

Large numbers of carp is a fish of aboriginal territory on which the fish feed on. Fish, devoid of conditions for life, leave its territory. Carp on the free sites arrange places for spawning, for which the crucians will grow and losses from predatory fish and eat without rivals.

These conditions and other factors provide explosive reproduction. Amur carp, can start new populations in different conditions: from single fertilized eggs in the presence of some young carp and participation with them in spawning adult female, two females (one of them will become a male), one female (she would have both Mature eggs and milt).

As can be seen from the above, the Amur carp can’t be besanzoni silver carp.

The presence of information about the life of Amur carp proves their actual existence and ownership of existing water bodies the huge number of egg-bearing females to the unknown mind of the Amur carp, not to bessancourt silver carp, confirming their fictitiousness.

Everyone with the problem of restoring fish reproduction, you need to keep in mind that while in the water are Amur carp, any interventions will not produce positive results.

Now, knowing the initial information about the Amur carp, easier to get to study them in a scientific way and start fighting with them, bearing in mind the widespread their catch. These measures will lead to the resumption of fish reproduction and restoration of their number.

Our reader put the question, of course, controversial, require a special study. However, based on personal years of experience and long observation, I can cite the following fact which can be taken as an example of the disappearance for no apparent reason other fish in Karasevich waters.

So, in the South suburbs near village Shishkino it has long been a network of flowing ponds, which until recently, except carp, were carried out a lot of roach, gudgeon and perch.

The pond is not poisoned, it was not in them, and Zamora, but perch and roach disappeared completely.

Now these water bodies inhabited by rotan, verkhovka, gradually disappearing gudgeon, pike, which can not breed to interesting for anglers, but it is mostly the dominance of silver carp of different sizes.

Interestingly, this carp during prolonged winter thaws are biting well and ice with winter on the hook often caught males, and in the summer in the catches is dominated by trance.

Of course, before publication, we could not contact the experts-ichthyologists.

In particular, the famous Moscow angler candidate of agricultural Sciences Arkady FOMICHEV, after reading this review, I completely disagree with the author’s approach to the problem and his findings.

He believes that the author is mistaken in calling carp hermaphrodites, which do not exist in nature, and the process of reproduction is entirely determined by gynogenesis, with whom Mr. Glukhov probably not familiar.

A. M. FOMICHEV as an ichthyologist, not without reason believes that the decisive factor in the life of reservoirs is their environment, which often becomes the Creator.