Somehow, among the bulk of the fishermen winter roads there is still a widespread belief that during the winter time when the “crucian” the ponds are covered with ice, this lazy and clumsy fish in the icy water falls into a state similar to suspended animation, and even burrows in bottom sediments. It is a delusion something akin to the widely-accepted one hundred years ago, notions that winter is not biting roach and bream and can catch nothing else, except “samudera”, nagraniem – barbaric way, no use spoiling a huge number of fish and preserved in many places before our enlightened time. 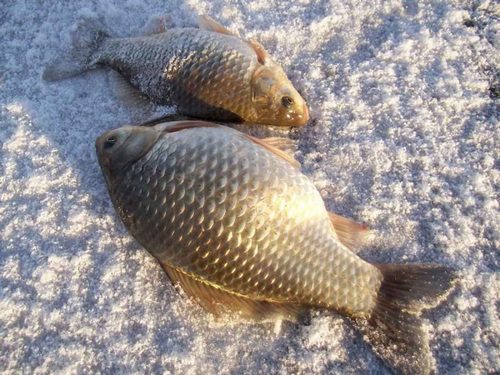 In General, look far in time and there is no special need: bream, Chub, IDE, bream, bleak, gudgeon became the “winter” fish just a few decades ago, when the hair or silk we have come polymers to light a jig, and its reduced size by the use of heavy metals and alloys has undergone significant changes and other “rough” elements of the gear, whereby the technique of catching fish from a wait started to use the methods of enhancing fish, causing it to take.

As for carp, he is, like any other fish, very hard to have in the winter in the dense, hypoxic ponds, frozen almost to the bottom, but dig in the mud where no oxygen at all, it is unlikely, and “drive” there carp for some time, can only numerous in these waters fish parasites. In those ponds where all winter to maintain high activity perch and roach and where in abundance is found predominantly white, or silver carp, the behavior of which in all seasons are like a roach or a bream, he’s pretty well caught, preferring, like roach, thaw with snow and a slow pressure drop. The difference between winter lifestyle carp from other fish is that it is less flexible and usually the whole period of freeze-up consistently adheres to one, usually the deepest point in the pond where its concentration is extremely high. Crucian found such a spot or even several similar sites fish in good weather expect quite a decent bite. From the places of wintering of carp shifted with the early arrivals of the spring snowmelt runoff, leaving the bottom drop offs and mounds, often rising at half depth, but again, close to winter Parking. By the way, along with carp in winter and carp side by side and they behave even more actively than small and feeble relatives, often carrying thin “crucian” gear.

Fishing for carp in winter exclusively bottom, something like the hatching on lured place bream: usually on several holes and put a light float rod or rods with small jigs, where the bite indicator is sensitive nod that works well is “on the rise”. Typically, when you bite carp for quite a long time “catches” bloodworms on the hook, and then, swallowing slightly POPs up, the float rests on the water, and nod slowly rises. Cutting to be sure you need to do with some delay. To bite well noticed, should be a leash on the float rod to do very short, and jig to set on the bottom in tension – so that it just touched the ground. In winter carp are finicky, so you should change it more often and bloodworms on the hooks on the fresh, sometimes complementing its larva burdock moth.

However, the above considered stationary fishing for carp is quite effective in the winter on the ponds, lakes, or quarries, where the whole period of freeze-up situation with the water levels or other habitat of fish remain stable. If there is a slow discharge of water, allowing better water flow and reduce the risk of hypoxic events, as well as to protect hydraulic structures from overloads during the flood, the ice on the pond sits in the shallow water falls to the bottom. All this causes strong shifts in fish camp, herding people to the underwater channel trenches, the deepest places where there are significant forage competition and a constant crush, haunting and strange. He also carp, starts to move a lot and feed. In these conditions carp it is possible to catch without any attachments active way, applying proven winter snap, for example, “locomotive” of the two small “hell” with a reliable and non-small-hooks. The game is smooth, measured, with a slow climb up, with a pause at the end of the transactions – as when fishing for bream. Such “stray” carp can bite not only near the bottom, but quite often in half-waters, resulting in the delay of the game or in certain “nip” nod down.