From the most ancient times the mankind in many areas of life uses a variety of nodes. Especially great is their significance in fishing, which, without quality means mating snap-ins loses its effectiveness, and sometimes even reduced to zero. Incorrectly tied the snap after some time can come loose or break at the binding sites. When properly selected method of binding is lost the strength of snap-on playing and casting. The most popular way of tying lures to a fishing spinning is the clinch. It is compact and not alarming the fish. Due to the ratio of binding simplicity and reliability of this knot knows almost every spinner, which is at least several times caught this tackle. 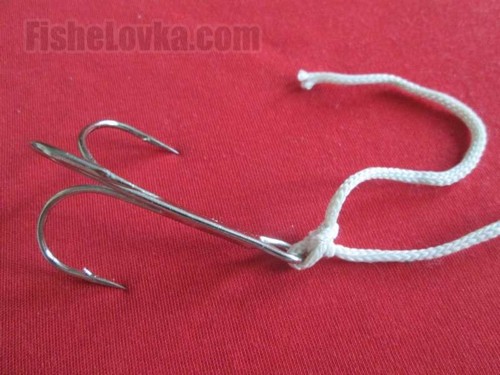 The names of the clinch and its history

Clinch has another name – capture. The encyclopedia of knots defines it as a kind of half snake, or a bloody binding. Snake and its variants at all times found the most unusual application.

Ancient Incas who inhabited the state of Peru from the XII to the XVIII century, used the snake method binding for nodular letters. Nodules with different number of coils tied by ropes of different colors, forming its system of accounts or a letter.

Naval fleet in historical times, used the punishment of seamen for theft with blows to the back. The thief was tied to a lattice hatch and hit “cats”, which consists of several braids, each of which ends with a snake knot. The more coils on the end of the braid, the stronger the attack. Therefore, some of the sailors could not stand the pain and died. Perhaps, hence the second name of the serpent binding – bloody.

The strength and scope of the clinch

Every fishing knot is its strength and its scope. Similarly, the gripping method of pairing each of its options convenient in certain circumstances.

Step-by-step binding of the clinch and its variants

For all kinds of the clinch characteristic fast and easy knit. Before you knit it, you must consider the material of snap – mono or braid. It depends on the right selection of gripper version of the node. For braids only suitable hardened version of the clinch.

Note! If before tightening it a bit to moisten the knot, it will change its structure and easier to heal.

A common variant of a gripper Assembly fit in the following sequence:

Improved gripping of the binding is complemented by another point in the algorithm-knit – after threading the end of fishing line in a loop near the eye end of the fishing line must still be threaded through the big loop formed between the strand and the tail of the line.

A hardened version of the clinch fit differently:

Note! In some cases it is easier to fiddle with the lure or swivel to a desired number of turns than wrapping the end of the fishing line around the base.

So, clinch, like any fishing node, has its particular application, a characteristic. The gripper option bundles a fishing snap-ins so practical and popular that is known to every beginner angler. To knit the knot, the clinch and its modifications quickly and easily – and that is the main reason of its popularity. And, of course, this method of binding is inherent in the incredible strength, so we can say with confidence, “clinch” – a satellite fishing trophies.