The most athletic and fun hunting for pike should still take her fishing with artificial lures and special snastochki. It is also possible to provide several ways of fishing: spinning, vertical jigging, carpet, and fly fishing, which used large streamers that mimic small fish. In addition, the best is the hunt for pike with larger jigs and “bullets-mirror” with a natural or artificial tips. 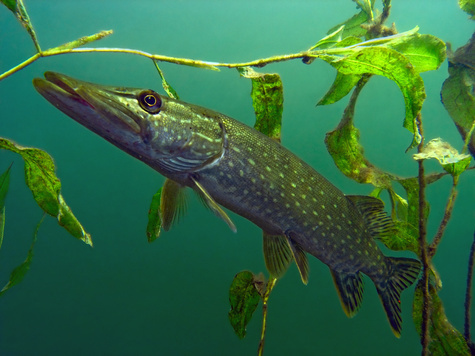 Each of these fishing methods require special and detailed consideration of the boundaries of application and its technical characteristics, but will have to stay on spinning fishing for pike because of its absolute popularity among the overwhelming mass of the fisherman and the continuous progression of this method both in terms of equipment and fishing techniques, moreover, are interdependent.

To staff spinning tackle for hunting on pike, the angler must clearly imagine what kind of requirements will be presented for the pond. Brief: should have at least two types of gear — middle class for catching medium-sized fish from a short distance with light lures and heavy class — to hunt for deep pike when you need far, to one hundred meters, casting heavy lures and tough fight with a tough opponent.

The main elements of the tackle — rod and reel. They must be of the same class. Rod the middle class usually has a length of 2.1–2.7 meters, or classic parabolic action, is stable in the range of bait weights 5-25 grams. The corresponding coil is usually applied spinning, with a gear ratio of the reducer is not more than 1:5, spool capacity — up to 200 meters of fishing line 0.2 mm in diameter.

Spinning rods heavy class have a length of 2.4 to 3.3 meters, more rigid parabolic action allows us to confidently throw on a limiting distance of the lure with a weight of 20-60 grams. They are Packed spinning reels with a gear ratio of not more than 1:4 and the spool capacity is up to 300 meters fishing line diameter of 0.3 mm. But most often we apply the multipliers — modern inertia reel type, equipped with a gearbox. They allow you to run farther casting heavy bait, and develop more tractive effort than a spinning reel.

Modern spinning rods are very lightweight and durable as made from high modulus carbon fiber and its composites with other modern materials. And rings, which are fitted in rod strength and durability not inferior to diamond.

How and what to fish for Rudd in the spring

The technological process concerned and spinning rods now an increasing number of anglers prefer not the usual nylon monofilament and tough braided cords. Such a scaffold can be applied with smaller diameter, which significantly increases casting distance. They practically do not stretch under load, which makes the cutting instant, and the wiring of the lure is very sensitive to even light touch and a very weak bites.

Rather arbitrary classification can be subjected to fishing lures used with spinning catching the toothy predator. Less fishermen use natural bait — dead, specially processed and fresh fish, fish guts or filaki strengthened on snastochki, as the range of modern artificial bogus is able to satisfy the requests of the most capricious pike. At least two large groups of man-made baits can be distinguished: imitating a sick or injured fish and provocative (noise, light). First use natural pike orderly instinct of the fish herds. These include spoons lures, some types of lures, bait for jig spinning rod (vibrohvosta, twisters, ripping, foam fish and similar soft imitation). The second is intended to provoke the pike to get to get out of ambushes, and even full, at least to hit the annoying bait — the rest will make good hooks. Such bogus, most likely are all types of spinners, certain types of bright, flashy colored crankbaits and lures, having an internal cavity with a thundering shot or light and sound devices.

In accordance with the seasonal habitat of pike, their size, activity and preferences in a particular reservoir is selected and the type of bait and its method of reference. Further, depending on light, time of day, etc., begin to play the role of such “nuances”, such as color, size, and activity of hornblende in varying the speed of the transaction. So, in the heat of summer, when pike hold shallow Svalov or ambush among the underwater vegetation, the best would be the use of bright floating crankbaits, spinning lures with a large opening angle of the lobe (45 degrees or more), light and wide oscillating spinners.

With the autumn cooling of the water potential victims of pikes lose summer glibness, beginning to move away to a depth, roll down the pike, where they occupy riparian snags (small pike) and channel edge (bottom pike). Here well proven jigs-baits (twisters, vibrohvosta, ripping and foam fish). It is important to choose the most attractive pace of posting bait that is directly related to its weight and dimensions, and the weight of the sinker-head is dictated by the fishing conditions (depth, casting distance, strength and direction of currents and wind). Catches are always good, if you follow the rule: the weight of the dummy has to be extremely small for these fishing conditions.

Wiring jig lures speed: after sinking to the bottom is two or three turns of the reel handle the bait off the bottom, then again she should be allowed to drop that will be seen by the sagging of the line. The pike bite usually occur n and stage dive and felt like quite the kick. To succeed, an experienced angler always slightly varies the speed and the length of each winding, weight of the lure, the angle of ascent from the bottom. It should also be remembered that the bait was perceived more natural, the weight and size of the sinker-head should be in harmony with the dimensions of the soft faux.

A good is fishing in autumn on heavy spoon lures and sinking lures, and loaded “vane” slow their posting near the bottom.

When playing pike can occur pretty difficult moments and unusual situations, as the fish often in the course of struggle changes the tactics of the opposition. For example, faces a gathering of the predator position when stretched like a string fishing line suddenly slack means that the fish quickly went to the side of the angler, so by getting rid of control, to accelerate and to make a crushing tackle throw. In this case, the angler should look: put the rod almost vertically (it smartserve jerk) and quickly podmotat fishing line, reducing the length of run pike. But nothing will help the angler, if he is in the beginning of the hunt for “toothy” was wrong friction brake for such a situation. Better brake a little to not make it than to drag, otherwise a sharp blow on pike teeth will not survive nor the most durable braid fishing line or a metal leash. In addition, it may stretch and break the hook, not to withstand the pike’s lip.

Another dangerous situation, when after hooking the fishing line along the arc rapidly goes to side and up and that means fish on extremely tight line is preparing to make the jump or cascade hops above the surface of the water, while pike, wildly shaking her head and wriggling all over, will certainly get rid of the hooks, even at the cost of their gills and other injuries. To prevent the loss of the trophy, besides the wounded, angler similar attack pike needs to fend off the following: as far as possible to lower the tip of the spinning under the water, and for some time to reduce the rate of selection of the line — pike, meets with supports on the line, quickly lost the “desire for flight”.

And again. About pike invented a lot of legends and absurdities. What is four-metre long skeleton of the predator in the Museum in Mannheim, turned out to be made up of the vertebrae at least two fish, although very large. And swallowed dogs and other non-small-animals bitten while bathing the kids?.. But the birds and small waterfowl, and small animals that fall into the water, the prey of the pike can be. One thing is certain — the magnificent gastronomy of the advantages of pike meat, and the opportunities offered by this fish, the person involved in the field of cooking. Here and the ear of the pike heads, and many recipes for stuffed pike, smoked pike, jelly, pies with pike…

In recent years, scientists have established the value of pike as follows: the substances contained in it. counteract the development of atherosclerosis in humans.

So pike is not only helpful representative freshwater ichthyofauna, but also a great object of sport hunting and valuable product at the family table. Catch pike!