Muddy water in the river, as it will help when playing big fish.

When fishing for big carp and bream often there is a situation when already at the last stage of the fight the fish gets away. Most often, this happens through the fault of the fisherman, who from an overabundance of adrenaline and excitement, just he admits fatal mistakes the fish playing: not used in this process, the properties of the rod, pulling the line attached to the rod position perpendicular to the ground. But sometimes the fish has its surprises.

For example, lestnici and fans to catch a large carp, you know what, even swallowed air, these fish can make the final spurt, which will be their salvation. In addition, the use of carp in favor and the fact that the fishing line often clings to the fin and with a sharp jerk just frays. Very often the fish starts to worry when she’s already down to the shore, she comes to the Bank, where the water is more transparent and its eyes see all that is on the beach (if you are interested in, how to see fish, read here). This begs the question, is it possible to make it so that the fish are not as scared of the light, and the sudden drop in depth when a wider review? 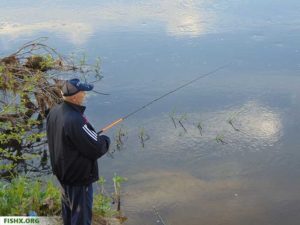 It turns out that you can. Enough to create turbidity in the water like a fish significantly less to worry and to resist playing. It is clear that fishing in muddy water is often not as effective as we would like, therefore, the cloudlet of dregs should apply literally in the coastal zone, at a distance of the length of Your landing net. For example, if fishing is at a distance of 5-7 meters from the shore and Your landing net is about 1.5 meters in length, the cloudlet of dregs at 1-2 meters from the shore will give more chances to bring large fish to the shore to make it into a net. Accordingly, if the landing net is longer, the need for cloud may even fall, because the fish away from the shore and at a depth not so shy, and her jumps are moderate and, most importantly, expected. Now the second question, how and what to muddy the waters?

Muddy water in the river, how to make

There are ways, in fact, a lot:

1. Stand upstream and natural way to create the dregs

2. In still water you can achieve this effect by feeding different mixtures, which can be purchased at a bait shop, and that also have some aromatic properties, “collecting” fish from the far parts of the water

3. In extreme cases, may even gain a couple of handfuls of ordinary earth which must be crushed and thrown into the water (many fishermen create a homemade mix based on sand, flour, clay, etc.)

It is important to understand that the turbidity cloud can be created directly at the time the fish playing, i.e. do not have to support the dregs for a long time. By the way, sometimes it’s just muddy water has a positive effect, rather than fishing in clean water. Despite the simplicity, this method deserves attention, especially if the fishing is on big fish, and gear fine. Yes, I misspoke, it’s much nicer to fish when they realize that the slightest mistake and the trophy will win the fight. It is clear that it is possible to put such gear that you do not think about the technique of fish playing, but that’s another fishing trip.

All the best to You.