The rod to a side of donkey is longer than the other side gear to 2 m. the Bite is determined by the vibration of the flexible whip. All this tackle is very different from other on-Board gear, using the feeder is open or closed. Open for plant food or a combination of vegetable particles, plus the larvae of the maggot or bloodworms, sometimes chopped worms. A closed feeder is used solely for live food and provided that the larvae are very mobile, able to go through holes in the trough. Usually in the snap-in uses two short leads with hooks that can be installed parallel to each other or one above, one below. 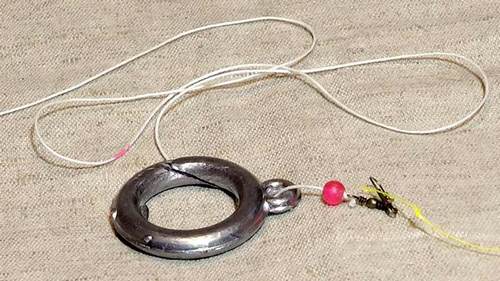 Convenient option side of the donkey, in which the apex of the rod ends nodding, made of metal ruler. The length of its working part 10 to 15 cm in width at the top is 4 mm and at the base 7-8 mm. Nod is quite elastic, but it clearly shows ledovye bite when fishing on the course.

Florence gear, or ring, a variety of fish were caught from time immemorial. This kind of side Donka. As for the rod it is better to take a picker or feeder. Interchangeable tip need to install according to the power flow, which is going to catch. Also it is possible to use a spinning rod with a flexible tip. Inertial or spinning the coil should be the stock of fishing line up to 50 m.

The snap-in consists of a metal ring (diameter 50-60 mm), attached to a fishing line of a fishing rod is 0.35-0.4 mm. On both sides of the ring are attached to the leashes so that the distance between them was at least 3-4 cm. long leash from 20 to 50 cm, depending on the strength of the flow, the diameter of 0.2-0.3 mm. Too long a leash when tying close to each other can be confused on for.
A mandatory component of this method of fishing feeder. She is tied to the stern of the boat with a thick fishing line or nylon twine. The ring is on the line of the trough in the sliding position and the side has a slit for quick disconnect. The hooks are selected according to the type of fish and its size. For bream is best suited forged hooks № 7-8 with a bend stinger inside. The feeder is a pouch of chicken wire mesh (its usually stuffed bread).

The tactics of fishing is that the fish came to the feeder and noticed the bait on the hook “Florentine women”, and hooks are always close to the feeder. From the trough if the correctness of bait goes a long feed track that is able to attract bream to fishing spot from afar.

Kamskoe anglers I saw and practiced a different model of the donkey from moving along the wire feeder equipment. It allows more efficient fishing by the principle of Florentine women. To do this, cut the fishing line with a length of 60 cm and a diameter of 0.25-0.3 mm is folded in half and at the point of bending to tie a noose. One end of the line put a sliding barrel sinker weighing 30-40 g, which is fixed on the bottom carabiner to the other end of the line tied to the hook so that, when in a free state, he did not touch weights. In the middle of the sinker hook wire with a spiral ring (such as ring to keychain). The clasp, which are below the sinkers, attached United loop leash with two hooks – one shorter, the other longer. The convenience of a tackle is that a spiral ring makes it easy to attach the snap to the line feeders, and barrel sinker quickly pulls down leashes with hooks. In addition, the tooling can be quickly replaced by another, as the loop joins the clasp attached to the end of the line spinning. The use of three leashes allows to use simultaneously three different nozzles. So, while waiting lesovoi of the pack can put on a single hook canned corn, and one for the maggots, and the third – a bunch of manure worms. Often in a fast stream cyprinid fish, for example, a large sabrefish, bream, take fry, who put on a hook stocking over his head, leaving a freely hanging tail. Put it on a hook №1-3 from 2-3 fry. As a result, the tackle becomes universal, suitable both for catching of predatory and peaceful fish.

Careful because bream can be afraid of the proximity of the boats, for fishing on the ring you want to choose a large depth. The feeder is lowered from the stern, but at times when there is insufficient depth there is a need to detach the tackle from the boat. Then use the rod to feeders also spinning-type reel.

So, we baited the hooks on nozzle. After that, the ring is lowered down to the feeder. Leashes, picks over and they stretch. The rod is placed on a Board and the vibration of its flexible tip to define the line. After the bream took the nozzle in his mouth and there was cutting, he was beginning to draw out. To be able to bring the fish to the side, the rod feeders (if any) you need to push the boat, bleed the line from the spool; the trough will remain at the bottom. Finally, the fish picks up the landing net, tackle again charged and installed in the operating position.

Perch fishing from a boat in any time of the year

This type of gear to catch bream on large rivers and flowing water reservoirs. In the Volga reservoirs tackle this performed well in the period the floodgates open when the flow increases. Bream then begins to move in flocks in search of booty, which leaches out of the bottom of the stream. Main ledovye tips for this gear in the autumn worm, Nightcrawlers, a bunch of big bloodworm, maggot, combined with bloodworms, some aquatic larvae, the larvae of bark beetles.

Tackle stage transaction consists of a short spinning, which is attached to a large coil having a keyboard brake. In my opinion, the best-fit model of spinning with a whip with a length of 40-50 cm in the same way as in the manufacture of side rods with cepkova, the Tulip on the tip should be removed and put on the whip hard enough nod from polymer plates. The main line passes through the holes of nod and has at the end of the swivel and carabiner for installation of replacement sinkers with eyelets. Higher weights via a sliding sleeve and skipped through it line also attach a swivel and carabiner, but for the leash. 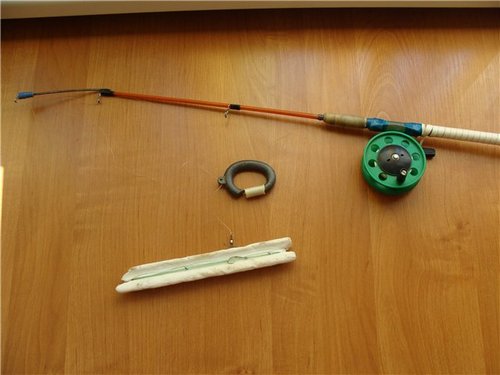 Fishing technique consists in the following. Snap down to the bottom, then a short rise of the sinker allow it to move under the influence of the flow for a short distance. Aged pause, and again the separation of the sinker from the bottom is the step (or step) of the transaction. Sinker must be balanced so that its not too much demolished. The length of the step is usually from 0.5 to 1.5 m. a major role in the demolition of weights is played by the thickness of the line. How selected sinker, the thickness of the twine and all of the tackle in accordance with the strength of the currents depends on the length of the wiring and when will lost contact with the ground.

The advantage of the step transaction that is a mobile fishing. Angler constantly gropes jet where you can stand fish. On some streams there are whole clusters of bream. Due to the fact that the jets have different speed limits, require different weight sinkers and different length leashes. Leashes better to have a replacement that can easily be attached to a fishing line through the carabiner. Hooks used No. 8-13.

Balls of groundbait the size of a tennis ball placed in a fine-meshed pouch that is lowered to the bottom, tied to the boat or buoy – the role of the latter can perform a normal plastic bottle. If the current is imperceptible, the depth under the boat is relatively small and the method of fishing allows you to do, then the balls are dipped in water freely without grid.

In some regions anglers for feeding bream use of ground and earthworms, and mixed in a chopped look with the soil. From this mixture make balls and throw them to the place of fishing, including placing in the feeder.

Knowing the location of the slope edge and its slope, it is possible to scatter the balls given the fact that they are pushed in a certain place. On a strong current at first throw large balls, then periodically continue to lure small portions.

In those periods when the bream is particularly fussy, irreplaceable nozzle may be brush motylej. They are baited with hooks made of thin wire, 5-8 larvae.
The range of nozzles for the fall fishing you should always have worms. The most attractive for fish at this time can be a red beetle that secretes an odor. Besides, wriggling on the hook, it creates attractive to fish fluctuations. A good showerhead can serve as a worm-podlesnik. It has an attractive reddish-Magenta hue, but unlike the beetle it does not have such a strong smell and it droops faster on the hook. But podlistnikov often found under old rotten leaves directly on the banks of reservoirs.

More attractive just for bream is a bundle of small dung or podlistnikov since this fish likes to surround the nozzle. Small worms in turn pierce through the middle of the body in two places. It happens that a single hook baited with worms at 5-6. But this method is good when there is no stuff that breaks ends. If fishing interferes with bream, small bream or other fish that need to stick tight like an accordion, hiding the sting of the hook to the tip of the worm. Sometimes, in order to lift the nozzle above the bottom, especially ilovethem worm, inflated with air (this is done with a syringe); also just above the hook can be clipped to a leash, a piece of cork or painted an inconspicuous color foam.

Maggots fall on bream is one of the efficient tips, but as the onset of the cold this attachment becomes less and less attractive if she remains sedentary. In still fishing maggots are best used in combination with the worm and bloodworms. This makes the lure more visible and very tempting for big bream.

Sometimes, catching on certain bait, the fishermen use them for amps smell. For example, seated on the hook worms or bloodworm dipped in a special solution of flavoring. However, attractants and flavourings fall should experiment with caution, as in cold water fish are very sensitive to foreign odors. In addition, to attract inactive bream by twitching or weak podtachivaniya nozzle.